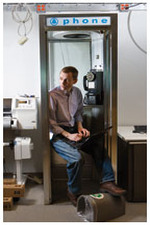 nIn a special feature on “dream jobs”, an AT&T researcher based in New Jersey explains what the “inventive researcher” does all day. In addition to being given free reign to engage their inner curiosity and tinker with new solutions, these researchers are allowed to “stare off into space” for hours at a time:

“My average day is kind of divided into thirds. There’s a third learning. I’m reading about a new bit of math, going to a talk,  understanding something that someone else has done that’s related to what I do, and talking to people in the rest of the company about what kinds of real-world problems they have. And then I spend about a third of the time thinking, pretty much staring off into space — thinking about how to put the pieces together. … Some of my most productive days have been when I’ve filled up about one page in my lab notebook, and then that gave rise to about a month or two of productive stuff. And then the other third is implementing and communicating: writing computer programs that test the theories, and writing papers. We all publish in journals and at conferences.”

AT&T sounds a bit like Google, eh? It’s good to see that not all companies require their most talented workers to keep their heads down all day, scurrying around the cubicle maze. Being able to engage in quite, contemplative thought is sometimes just as productive as furiously tapping away at the keyboard. (Hat tip: Binky)