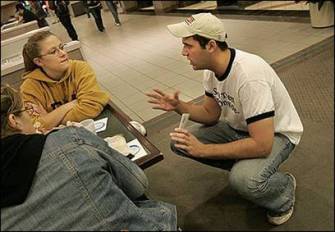 As I have argued previously, the current communication challenge is to go beyond the liberal democratic base who were mobilized by Inconvenient Truth, and to reach a diversity of publics who currently tune out the urgency of climate change. Here’s what Andrew Revkin at the NY Times reports about the Gore-led campaign strategy:


Pollsters and communications experts have noted that the public remains deeply divided along party lines over global warming and that the issue rarely shows up on voters’ lists of worries.

Ms. Zoi said the goal was to recruit people she described as “influentials.” She added: “These are people who talk to five times as many people a day as the typical person, who derive self-esteem from having new information.”

The ads will be coordinated with outreach through organizations like the United Steelworkers union and the Girl Scouts.

So what exactly is an influential? How have influentials been effectively used in past political and marketing campaigns? I wrote about this important communication strategy and its relevance to climate change in a column last year titled “A Two Step Flow of Popularization.”

From the column, below is some background on influentials and their potentially central role in climate change communication:

Activating the wider public means more than just “getting the facts out there.” As I have emphasized in recent presentations and at my blog, part of the communication problem can be solved by figuring out ways to frame the old issue of climate change in new ways, making the complex topic personally meaningfully to segments of the public who are currently tuning out the issue. Another solution involves harnessing the power of celebrity culture and entertainment media to direct wider public attention to the issue.

Yet the media isn’t the only way to reach the public. Since the 1940s, communication researchers have recognized the importance of “opinion-leaders” in shaping public preferences, informing fellow citizens, and catalyzing behavior. Tracing the diffusion of news and advertising messages within local communities, these researchers identified a select number of individuals across social groups as key information brokers. From movies to presidential politics, a small group of citizens paid close attention to news and advertising on a specific topic, discussed the issue with a diversity of others, and appeared to be more persuasive in convincing individuals to adopt an opinion or course of action.

This early work introduced the phrase “the two step-flow of information” to conceptualize the effects of campaign and media messages as passed on to the inattentive public by way of a relatively small handful of citizens. Opinion-leading individuals did not necessarily hold formal positions of power or prestige in communities, but rather via conversation and strength of personality, they served as the connective communication tissue that alerted their peers to what mattered among political events and market innovations.

Over the past decade, the media system has changed dramatically, yet the major revolutions in information technology have made opinion-leaders even more central to the influence of communication campaigns. Not only are audiences increasingly fragmented and hard to reach, surveys show that the public is increasingly distrustful of both news and advertising as sources of information, preferring instead recommendations from friends, family, co-workers, and peers. Up against these trends, the business community appears to have rediscovered the concept of opinion-leadership, as popular magazine articles and best-selling books such as The Influentials, The Tipping Point, The Anatomy of Buzz, and Applebee’s America describe how to take advantage of “opinion-leaders,” “mavens,” “connectors,” and “buzz marketing.”

Consider how the Bush campaign incorporated opinion-leaders into its successful 2004 re-election bid. According to former Bush advisor Matthew Dowd, a co-author of Applebee’s America, strategists sent an email questionnaire to their national list of seven million volunteers, asking four specific questions about how willing volunteers were to write letters to the editor, talk to others about politics, forward emails, or attend public meetings. Based on answers to these questions, the Bush team segmented out two million “navigators” or opinion-leaders.

Contacted on a weekly basis by email and phone, these two million navigators were asked to talk up the campaign to friends, write letters to the editor, call in to local radio programs, or attend public meetings staying on message at all times with nationally coordinated talking points. For the Bush campaign, these supporters became grassroots information brokers, passing on interpersonally to fellow citizens the themes featured in political ads, news coverage, and in presidential stump speeches.

The Bush team is not unique in using opinion-leaders, as they have been a major vehicle for a wide range of communication initiatives, ranging from Victoria Secret marketing campaigns to mega-church recruitment. In surveys, opinion-leaders can be identified using short batteries of questions tapping either indicators of personality strength, or alternatively, civic-minded behavior such as local volunteering or political participation. In some campaigns, opinion-leaders have been identified observationally, with recruiters heading into communities and spotting individuals who appear to be charismatic and social connectors. Each of these methods is designed to identify individuals adept at persuasively passing on messages and cues to family, friends, and co-workers.

Recruited by national science organizations and applied to the communication of climate change, these opinion leaders might be local organizational members, science teachers, science enthusiasts, science and medicine related professionals, or citizens who are active and attentive to science issues generally. What matters is that they cut across social groups in a community.

When “surges” in communication and public attention are needed –such as surrounding the release of a future section of the IPCC report or a major study by the National Academies of Science– opinion leaders can be activated with talking points to share in conversations with friends and co-workers, in emails, in blog posts, or letters to the editor. These “scientific citizens” would not formally speak on behalf of or represent the scientific organization, but instead their effectiveness would stem from their ability as co-workers and friends to communicate climate change in a way that makes it personally and politically relevant.

Related
Life
Visualization test
Lorem ipsum dolor sit amet, consectetur adipiscing elit. Nullam id tincidunt mi. Morbi malesuada nulla sit amet est hendrerit tincidunt. Etiam viverra, nisl id volutpat eleifend, est augue sodales orci, […]
L&D Strategy
Transfer of learning: The necessary step to make learning stick
Transfer of learning is a concept that should be top-of-mind when planning any learning and development program. Why? In a perfect world, the billions of dollars organizations collectively spend every […]
Starts With A Bang
Why we’ll never see back to the beginning of the Universe
We thought the Big Bang started it all. Then we realized that something else came before, and it erased everything that existed prior.
Thinking
Is there an afterlife? See how your answer compares to polled Americans
There is more consensus on what heaven looks like than hell.
Thinking
How science changes the way we think, according to 10 leading scientists
A group of prominent scientists shares how research has changed them.
Up Next
Guest Thinkers
A Strong Endorsement for the Toyota Prius
I just drove round trip from the Minneapolis airport to Madison in a rented Toyota Prius. I have to say that the car is super fast and smooth and has […]