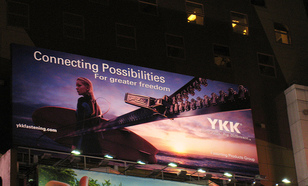 One advantage of working in the Times Square area is the ability to check out interesting new billboards on a daily basis. The other day, this billboard over the Westin Hotel on West 42nd caught my eye — it’s a billboard for YKK Fastening with the image of a surfer girl and the tag line “Connecting Possibilities: For Greater Freedom.” (If you’re not familiar with YKK, just check out the zipper on your pants or dress — chances are, it will have a cryptic little YKK label on it). So what exactly is a Japanese zipper manufacturer doing, spending tens of thousands of dollars on a huge billboard in Times Square?

There must be some sort of top-secret zipper innovation being prepared for nationwide roll-out… Until yesterday, I didn’t even know what YKK actually meant — turns out that YKK is an abbreviation for “Yoshida Kogyo Kabushikikaisha.” I always assumed YKK was a Japanese company, however, I would have been just as willing to accept the notion that YKK might actually be a Russian-Mongolian company (“YakutskKalashnikov Korporatsiya”) using zippers as a convenient front for cranking out wartime munitions for the Soviet military-industrial complex.