There is so much information thrown at us at any given moment that it’s often hard to separate the worthwhile from the superfluous. Some of it we know to be true or false based on our own knowledge base, cultural background or the trust we have in the source. But the rest of the info? It requires searching and cross-checking which most of us do not do. As a result, as much useful stuff that we hope inhabits our brain, some of it is likely full of half-truths or worse.

Thanks to the gods of the internet, a helpful soul has arisen and created for us a comprehensive chart of some of the frequently encountered “facts” and what they are in reality. Put together by the data journalist and information designer David McChandress, the chart chronicles research into the most common misconceptions or “myth conceptions” as he calls it.

For instance, maybe you didn’t wonder recently if Napoleon was really as short as they say. But this bit of info is probably ingrained in your head as a result of the cultural conditioning that has maintained Napoleon’s short stature for centuries. Well, it’s not true! Turns out he was 5’7” – an above average height for a French man of his time.

Something else that I’d not even think of questioning – do bulls hate red? Surely they must, judging by the millions of cartoons, movies and paintings that have reinforced that idea. Turns out it’s not true! They just react to the motion created by the bullfighter, waving the cloth in their face. 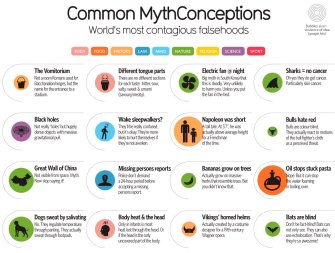 Of the next set of misconceptions, watch out for some key ideas – we didn’t directly evolve from chimps, and you can actually swim after eating! 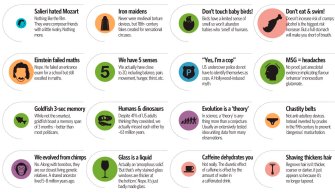 Coming up we have the tearing down of the classic “we only use 10% of our brains” and the fact that however many of the brain cells you use, they are not likely to be killed off by alcohol: 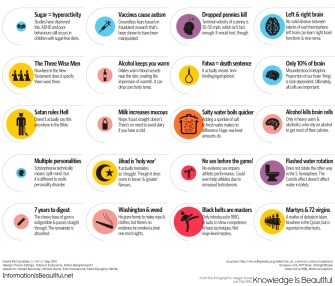 The spikes in their mouths would have helped them catch squid or fish.
Up Next
Culture & Religion

Would God Create a World Full of Other Competing Gods?

The conflict between faiths is one good reason to doubt God’s existence.