In April 2019, the Event Horizon Telescope team released the first image of a black hole — an extremely dense object from which not even light can escape. Capturing the image took hundreds of scientists, years of work and eight telescopes, but the low resolution makes it hard to get a sense of how black holes actually look. Now, a new NASA animation offers a clue.

The visualization, created by Jeremy Schnittman at NASA’s Goddard Space Flight Center, shows how a black hole’s gravity distorts the light around it, like a carnival mirror. The gravitational pull is so extremely strong that we’re able to see, from our angle, light that’s traveling under and behind the black hole. NASA writes: 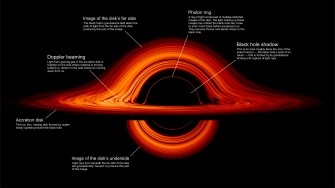 You might notice that the left side of the black hole’s accretion disk — a ring of hot matter that orbits a black hole near the speed of light — appears brighter than the right side, a phenomenon that’s explained by the Doppler effect.

“Glowing gas on the left side of the disk moves toward us so fast that the effects of Einstein’s relativity give it a boost in brightness; the opposite happens on the right side, where gas moving away us becomes slightly dimmer,” NASA wrote. “This asymmetry disappears when we see the disk exactly face on because, from that perspective, none of the material is moving along our line of sight.”

The visualization hopefully makes it easier to understand Einstein’s theory of special relativity.

“Simulations and movies like these really help us visualize what Einstein meant when he said that gravity warps the fabric of space and time,” said Schnittman. “Until very recently, these visualizations were limited to our imagination and computer programs. I never thought that it would be possible to see a real black hole.”

It’s currently Black Hole Week at NASA, so if you’ve ever wanted to learn more about one of the cosmos’ strangest creations, you can head over to the agency’s website.

Nature is a whole. The sciences should be, too.
Up Next
Hard Science

Experts decide to try knocking an asteroid off course

Before the next big, dangerous, incoming rock arrives.