Humanity has been openly flirting with cosmic destiny for centuries. From the early reaches of our science fiction literature to the astounding feats of manned space exploration. We’re getting anxious still wading on the earthen shores. The vast expanse of space is calling.

It’s time we finally left the planetary womb and started strutting our stuff permanently amongst the stars.

But, in order to do that, we are going to need some serious new inventions for space colonization. The likes of which will allow us to reach our most ascendent of aspirations — the conquering of the stars.

Whether it’s getting to the moon first, crafting new terraformed sands of Mars, or spinning through self-sustaining colonies — the end result will be the same.

We’re leaving the sandbox and these are some of the tools we’ll use to do it. 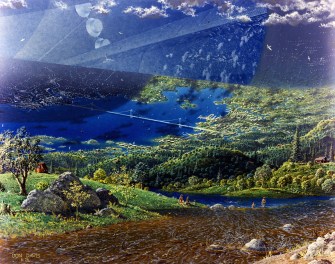 In the 1970s, Princeton physicist Gerard K. O’Neill, was tasked with designing a free floating space colony with existing technology, materials and construction techniques. Suffice to say, we’re no closer to having space colonies now then we were then. O’Neill wrote a number of fascinating books on the topic and claimed that the concept was feasible at the time. He was interested in building alternative human habitats that were both beyond Earth and beyond a planetary body. Out of this was conceived the idea of a giant rotating spaceship, which could support a biosphere and house up to 10 million people.

After its founder’s namesake, this space colonization concept has come to be known as the O’Neill Cylinder. The basis of the structure would be crafted out of steel and aluminum and formed into a hollow cylinder.

This kind of space settlement is arguably the most important of inventions we’d need to give us a permanent place in space.

O’Neill’s plans for the colonies originally appeared in the journal Physics Today. He went on to expand on the idea in a number of books, most notably in The High Frontier: Human Colonies in Space.

A closed ecosystem inside would create the biosphere. Sunlight and solar power would be utilized by giant glass windows in space. All together the goal would be to create a climate controlled living space. There would be no limit to what kind of climate or ecosystem it is that you wanted to create.

Rather than living on top of a sphere as we do now, future cylinder colonists would settle from the inside. Artificial gravity would be created by the cylinder’s walls rotating. These colonies would be situated at Lagrange points in order to stay in a consistent and stable gravitational environment. It would take weeks to fly to these colonies from Earth.

It’s mind-boggling to think of the number of inventions we’d need to create to get a project of this magnitude started. But humanity has never shied away from inventing insane and impossible things.

An entire space mining industry would be needed to transport rocky material from the moon and asteroids to serve as the bedrock to these colonies. Space construction crews would assemble the colonies in space, backed by the thoughtful minds of engineers, master ecologists and so on.

Our American Gilded Age would look pathetically poor in comparison to such an expedition.

This type of space colonization technology was recently referenced by none other than Jeff Bezos, the CEO of Amazon. A student of science fiction and fact, Bezos’s goal is to help build the future of our space industry to one day make something like this possible.

Only time will tell if he’s up to the task. Bezos did recently get some flack from flim flam man, Elon Musk — who is more concerned with getting to Mars in the next five years… or never.

Now, if Musk would have read up a little on his literature, he’d have realized he’s an unwitting planetary chauvinist — a term coined by legendary fiction writer Isaac Asimov.

During an interview, Asimov was questioned about whether or not he’d ever written about space colonies. His response:

“. . . We’ve all been planet chauvinists. We’ve all believed people should live on the surface of a planet, of a world. I’ve had colonies on the moon — so have a hundred other science fiction writers. The closest I came to a manufactured world in free space was to suggest that we go out to the asteroid belt and hollow out the asteroids, and make ships out of them [in the novelette The Martian Way]. It never occurred to me to bring the material from the asteroids in towards the earth, where conditions are pleasanter, and build the worlds there.”

Yet, there is still some validity in wanting to both colonize planets such as Mars and create free floating space colonies. So why not aim for both? 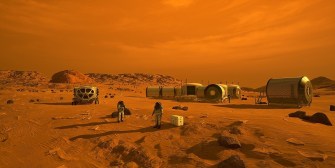 Getting ourselves to Mars requires an entire new class of things that don’t exist yet. NASA has tasked themselves with leading the charge on an incredible amount of new technologies that will assist them in both the voyage and landing on Mars. These inventions would also of course spill over to other space colonization efforts.

NASA is working on creating satellite propellant transfer, which means that a robot would be able to refuel a spacecraft while in space, thus eliminating the need for a vehicle to return to the ground and fill up. This would allow for greater range in deep space and be a great boon for transporting space materials without expending more energy than needed.

Another problem that astronauts and future colonists will face is radiation. While scientists are working on better modes of propulsion such as advanced solar sails and lightweight heavy-lift rocket systems, they still face the ever present problem of radiation.

NASA needs to create something that can shield their spaceships if, for example, astronauts are looking to take a six-month trip to Mars. They’ll need to be able to balance creating a radiation shield that’s not too massive, but still protects the ship’s inhabitants.

We’re barely scratching the surface when it comes to just traveling to Mars. Until we can figure this out, actually landing and terraforming the planet is a pipe dream.

But that hasn’t stopped NASA from investing in some truly new revolutionary space technology.

There is an innumerable amount of problems that our space inventions will need to solve. The crafting of O’Neill colonies would bring on an absolute deluge of scientific discovery and creation.

Even the maddening planetary chauvinistic rush to Mars will be beneficial to our space colonist aspirations as well.

All in all, our most important inventions need to solve our most basic and eternal problems, but this time in space. Shelter, safety, sustenance and a place to grow and one day thrive.

We’ll leave it up to our future inventors to decide how we get there.

What lies in store for humanity? Theoretical physicist Michio Kaku explains how different life will be for your descendants—and maybe your future self, if the timing works out.
▸
with
Michio Kaku
Up Next
Thinking

The Portal promises to be a deep dive into the possible.