On September 22nd — after waiting out a delay imposed by Typhoon Mangkhut — a satellite launched containing a miniature space elevator designed by researchers at Shizuoka University. It intends to serve as a test model of a future space elevator that the Obayashi Corp. hopes to construct in the next 30 years.

The idea of a space elevator was first inspired by a Russian recluse scientist named Konstantin Tsiolkovsky who, in observing the Eiffel Tower, imagined a “celestial castle” attached to it in geosynchronous Earth orbit.

Though there is a practical draw to consider here — a space elevator is an appealing project because it would, in theory, cost less to send something up a space elevator than via a rocket — there are other hard practical realities to consider as well. As Jason Daley notes in Smithsonian, there is currently no material strong enough to work as the elevator’s cables are supposed to work. “Even carbon nanotubes,” he writes, “the strongest material we’ve devised so far, would shred under the stress.” 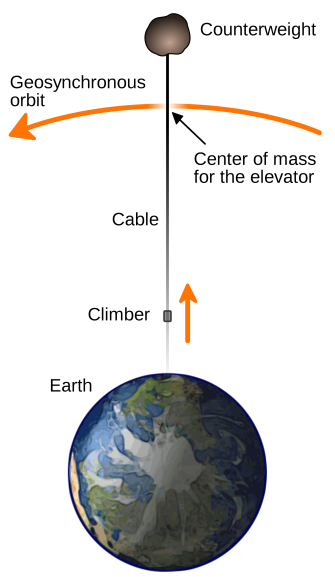 How should a space elevator work, anyway? Well — the further we get from the earth, the greater the likelihood that whatever is escaping earth will encounter centrifugal force. There is a point between earth and space where the gravitational tug and centrifugal force are perfectly balanced against each other. That’s called the ‘geosynchronous equatorial orbit.’ It’s here that Obayashi imagines a space station of some kind. Beyond the floating structure occupying this point — at the other end of the line — would be a weight. The combination of this weight and the centrifugal force of the weight pulling on the other end of this line would keep the ‘elevator’ line in place.

Though this isn’t explicitly stated, one would imagine that one benefit of testing a mini-space elevator would be in testing how well this machine in miniature works at a certain level of gravity.

What else would need to be tested? What sort of elevator cable material could withstand space debris, be strong enough to hold weights going up and down the line, and also potentially change size the further it gets away from the reach of the gravity of the planet, for one. Perhaps there can be a collaboration with the British RemoveDebris Mission, where a net is fired out into space to wrap itself web-like around any potential passing debris.

The full extent of Obayashi’s plans are ambitious. It isn’t just the elevator they’re building; if the video on their landing page is any indication, they’re planning to build a slew of things. From a structure at the Mars Gravity Center — a point above the earth where the gravity is the same as it is on Mars — to a “Low Earth Orbit” gate from which one can deploy satellites back to earth.

The goal is to have the elevator completed, up and running, by 2050.

What lies in store for humanity? Theoretical physicist Michio Kaku explains how different life will be for your descendants—and maybe your future self, if the timing works out.
▸
with
Michio Kaku
Up Next
The Present

Brett M. Kavanaugh and Christine Blasey Ford, one of three women who’s accused him of sexual assault, are due to testify before the Senate Judiciary Committee on Thursday.