Jupiter’s long been a puzzler to astronomers. Planet formation theory holds that a gas giant forms far away from its star then moves inward over time until it’s in a tight orbit around the sun. Jupiter, though, sits right in the middle of our solar system’s planets, between Mars and Saturn. And that’s not all that’s odd: There’s an unexpectedly asymmetrical pair of asteroid clusters — known as the Trojan asteroids — preceding and trailing Jupiter in its orbit. The group in front is 50% larger than the one in back. The most widely accepted idea was that Jupiter formed near the Sun and moved outwards.

That’s now been turned on its head by a team of scientists from Lund University who ran a series of models to try to identify a plausible origin story for Jupiter. They discovered that the planet and its clusters would be where they are under only one scenario: Jupiter forming way out near Uranus — as gas giants are supposed to do, after all — and moving slowly toward the Sun, attracting and accreting the asteroids that now form its core, with the leftovers trailing behind. Lead author Simona Pirani says, “This is the first time we have proof that Jupiter was formed a long way from the Sun and then migrated to its current orbit.” Including the mystery of the asymmetrical Trojans in the simulations was the key. 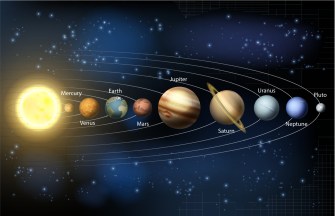 Jupiter, right in the middle of everything.

The model that lands Jupiter where it is today, along with its thousand of Trojans, begins four times further away from the Sun than Jupiter currently orbits, just inside of Uranus’ orbit. Jupiter first took form about 4.5 billion years back as an icy planetary seedling, an ice asteroid, no bigger than Earth. Somewhere between two and three million years later, the future giant began spiraling slowly inward toward the Sun, pulled by gases circulating throughout the solar system. It took about 700,000 years to get where it is now. Along the way, before it developed its gaseous atmosphere and massive size, Jupiter’s gravity pulled the Trojans in — the researchers expect Jupiter’s core to be composed of materials similar to the Trojans. They’re believed to be rich with dark carbon compounds, and likely rich in water and other volatile materials beneath an outer layer of dust.

Trojan clusters held in place by the Sun and Jupiter

Lucy in the sky with Trojans

In October 2021, NASA plans to launch its Lucy mission to study the Trojans. It’s believed that they’re very old time capsules from the universe of four billion years ago. The craft will study seven of them: one from the solar system’s main asteroid belt, and the remaining six from the clusters leading and following Jupiter in its orbit.

Those two Trojan groups are held in place at stable LaGrange points by the combined gravitation pull of the Sun and Jupiter acting together as a single centrifugal force acting upon them.

NASA has high hopes for the mission as chance to get a closeup look at the type of materials from which our planetary bodies formed.

Meanwhile, Jupiter’s seeming a little bit less mysterious now, at least in terms of its origin. It may also be that ice giants Uranus and Neptune, as well as Saturn, have a similar history.

Why are so many objects in space shaped like discs?

The secondary ticketing market is worth $15 billion. How long will fans have to pay?

Artists and fans are the big losers as bot-powered scalpers make a killing.