Nils Frahm hit another level in an already impressive career when recently performing at Walt Disney Concert Hall. The German composer and producer has played in clubs and festivals for years. Presenting during the LA Philharmonic’s season affords Frahm new audiences and opportunities in arts organizations around the planet. The invitation was worth it; the amount of equipment one man plays in two hours is simply staggering.

Frahm’s show had been sold out for months. Yet staring from the side of the stage, a good fifth of the venue was empty. Some subscribers failed to show—their loss. There was another reason for the absence, as per a post-show conversation with his management: the secondary ticketing market.

The online event ticketing market is expected to reach $68 billion by 2025. By next year the secondary market will bring in over $15 billion. None of that revenue goes to the artists, management, or venues. Fans pay the price.

Frahm isn’t the only artist suffering such a fate. Bruce Springsteen has repeatedly expressed frustration with scalpers. His Broadway debut, Springsteen on Broadway, pulled in $106.8 million at the box office over its 58-week run, yet the show demanded the highest average ticket price on the secondary market in history: $1,789.

Bikini Kill fans were excited when the band announced its reunion shows. As expected, tickets sold out immediately. The problem is that as fans waited online (virtually) for $40-$45 tickets, Stubhub was already listing them for up to $900. In fact, the company now advertises with “Sold out just means get them at Stubhub.” Not exactly the moral beacon for fan-artist relationships.

After Taylor Swift lost an estimated $150 million due to the secondary market on her 2015 tour, she did the unimaginable: She purposefully inflated ticket prices for non-verified fans. The $700 price tag ensured bots and scalpers could not profit from her fans. Yet it also meant that her shows did not sell out.

Crafty and commendable business move, but not sustainable. Thousands of actual fans were blocked from seeing her perform due to rampant and practically unregulated scalpers. According to a new report, it’s going to get worse: Ticketing websites are being warned to prepare for 40 percent of their traffic coming from “bad bots.” The cost of extra security protocols and maintenance will translate into higher fees on tickets, forcing fans to once again pay the inflated price.

The ticketing industry is practically unregulated. Though President Obama signed the Better Online Ticket Sales (BOTS) Act into law in 2016—which does not appear to be working—he also did the ticketing industry a disservice when his administration allowed the merger of Live Nation and Ticketmaster in 2010. Many experts agree that this is in violation of antitrust laws, but really, who’s monitoring trusts when a few hundred thousand at Trump Hotel buys you insider access?

A little history about how we arrived here is in order. Trusts were all the rage in the 19th century. Corporations were given free access to acquire and consume whatever competition they chose. This became problematic when these companies grew more powerful than the government.

The Sherman Antitrust Act of 1890 was the first step in mitigating the power of corporations that were crossing industries and determining prices. Specifically, the law was designed to prevent any company from having the ability to artificially raise prices by restricting supply or controlling trade.

Instead of catering to congressional oversight, corporations just became slicker. Along with Benjamin Harrison, who signed the Sherman Act into law, the next two presidents prosecuted a total of 18 antitrust cases over the next eleven years. Enter Teddy Roosevelt. 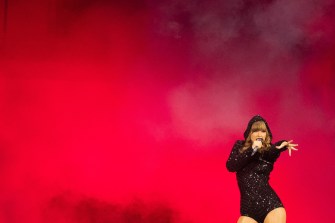 Over the course of his presidency, Roosevelt brought 44 antitrust suits to court. While the myth has him “for the people,” Roosevelt was actually making sure that corporations would not acquire more power than elected officials. He also knew public sentiment was on his side. Offer too much power to a handful of companies and, as Supreme Court Justice John Marshall Harlan, who presided over Roosevelt’s most famous case against Standard Oil, wrote in his decision,

“The nation had been rid of human slavery, fortunately, as all now feel—but the conviction was universal that the country was in real danger from another kind of slavery sought to be fastened on the American people; namely, the slavery that would result from aggregation of capital in the hands of a few individuals and corporations controlling, for their own profit and advantage exclusively, the entire business of the country, including the production and sale of the necessaries of life.”

Many were aghast when presidential candidate Elizabeth Warren suggested breaking up tech giants such as Amazon, Facebook, and Google, because their power stifles competition and innovation. She’s actually just revisiting Rooseveltian politics. She’s also right, as Columbia law professor Tim Wu suggests in his latest book, The Curse of Bigness: Antitrust in the New Gilded Age.

In a span of just years, Facebook acquired 67 companies, Amazon 91, and Google 214. Branching out into seemingly divergent industries—look, we’re really a self-driving car company!—causes the public to overlook the fact that nearly all of Google’s profits come from advertising revenue. Having a diverse portfolio of pet projects allow technology companies to masquerade as swingers while consolidating power and controlling supply, exactly what the Sherman Act was designed to protect against.

Why you can’t get tickets: The Ticket Game (CBC Marketplace)

Why you can’t get tickets: The Ticket Game (CBC Marketplace)

Across industries, Wu writes, the biggest corporations are dominating: Anheuser-Busch InBev and MillerCoors control northward of 70 percent of global beer sales; after breaking up AT&T’s monopoly, they’ve now emerged next to Verizon as a giant, purchasing DirecTV and Time Warner along the way; rampant criminality in the pharmaceutical industry allows companies to increase the price of drugs by 6,000 percent on a whim. Martin Shkreli might be in jail, but Daraprim remains $750 a pill, up from its initial cost of $13.50.

Wu includes Ticketmaster in his list of problematic companies. Live Nation owns, leases, operates, or has exclusive booking rights to 157 venues worldwide. That forces all of those shows to be managed by Ticketmaster. While Ticketmaster claims that it wants to circumvent the secondary market, the truth is they lost the race to Stubhub. That didn’t stop Ticketmaster from acquiring the reseller, TicketsNow, for $265 million in 2008.

Interestingly, Ticketmaster considered selling the company the following year in fear of antitrust laws while being courted by Live Nation. Worry not—TicketsNow remains a wholly owned, independently-operated subsidiary. Yet the bond remains strong, as Ticketmaster was accused of recruiting scalpers in 2018.

I don’t know any music fan (and I didn’t even touch sports) who hasn’t been frustrated by the ticket-buying process. The connection between a musician and fan is sacred. Having attended hundreds of concerts in my lifetime, I’ve experienced some of the most incredible experiences there. The sense of community and camaraderie is transcendent.

Once again, the capitalistic inclinations of the few undermine a human ritual. A few shady players have wedged themselves between fans and artists, while presenters and ticketing agencies conspire to create a new trust that plows forward unregulated. The connection between artist and fan severed, the majority in this cycle remain powerless. In plain language, it sucks and no governmental body is doing anything about it.

Roosevelt was aware of something important. He knew that if public sentiment grew loud enough, the pitchforks would come out. He wasn’t breaking apart capitalism but attempting to save it. The regulation of industries was to ensure corporations would still profit; he wasn’t stifling them. It’s not certain we’ll make the same choice this time, but until this elephant is addressed, fans will continue to lose.

Stay in touch with Derek on Twitter and Facebook. He is the co-founder of Enrapt, a smart ticking platform.

Scientology, QAnon, and Heaven’s Gate: why do we seek healing from cults?
▸
with
Jamie Wheal
Thinking

Do right and wrong depend on culture, or does morality transcend place and time?
Up Next
Starts With A Bang

If you’re careful enough, you can learn more about the Solar System than you ever imagined.This year, on March 20th, the full Moon will illuminate the night sky. With the […]