Astronomers believe that before planets formed, there were lots of mini-planets, or planetesimals, many of which eventually broke apart — they’re believed to be the source of meteorites that strike Earth. According to a recent study, a group of meteorites all around the globe may have come from the very same planetesimal. Not only is that a bit weird, but the evidence suggests that this former baby planet was not what scientists thought a planetesimal could be.

The research, “Meteorite evidence for partial differentiation and protracted accretion of planetesimals,” was partially funded by NASA and is published in Science Advances. 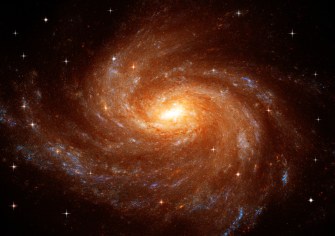 It’s believed that planetesimals are formed out of the swirling mass of gas and dust that was our universe roughly 4.5 billion years ago. As the universe cooled, bits began to crash into each other, forming these small bodies in less than a few million years.

There may have been planetesimals that formed in the middle period. The study notes, “This could have resulted in partially differentiated internal structures, with individual bodies containing iron cores, achondritic silicate mantles, and chondritic crusts.” However, there’s been little evidence of such “intermediate” planetesimals.

Until now, it’s been basically a binary proposition: melted or unmelted. Which gets us to the family of meteorites. 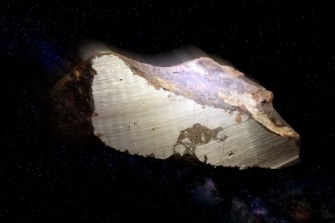 When meteorites are found and studied, the type of planetesimal from which they came is usually clear: melted or unmelted. Not so for a family of meteorites called the “IIE irons.” (IIE is their chemical type.)

As study co-author Benjamin Weiss of MIT’s Department of Earth, Atmospheric, and Planetary Sciences (EAPS) explains, “These IIE irons are oddball meteorites. They show both evidence of being from primordial objects that never melted, and also evidence for coming from a body that’s completely or at least substantially melted. We haven’t known where to put them, and that’s what made us zero in on them.”

Researchers had previously established that all of these IIE iron outliers — which themselves can be either achondritic or chondritic — came from the same planetesimal, and that raises some intriguing questions.

As study lead author Clara Maurel, a grad student at EAPS, puts it, “This is one example of a planetesimal that must have had melted and unmelted layers.” Did that baby planet perhaps have a solid crust over a liquid mantle? “[The IIE irons encourage] searches for more evidence of composite planetary structures,” she says. “Understanding the full spectrum of structures, from nonmelted to fully melted, is key to deciphering how planetesimals formed in the early solar system.” 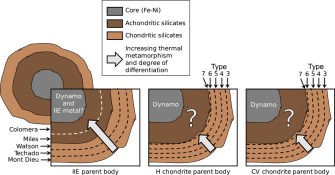 “Did this object melt enough that material sank to the center and formed a metallic core like that of the Earth? That was the missing piece to the story of these meteorites,” said Maurel.

If that was the case, the scientists reasoned, might not such a core generate a magnetic field in the same way that Earth’s core does? Some minerals in the planetesimal might have become oriented in the direction of the field, similarly to the way a compass works. And if all that’s the case, those same minerals in the IIE irons might still retain that orientation.

The researchers acquired two of the IIE iron meteorites, named Colomera and Techado, in which they detected iron-nickel minerals known for their ability to retain magnetic properties.

The team took their meteorites to the Lawrence Berkeley National Laboratory for analysis using the lab’s Advanced Light Source, which can detect minerals’ magnetic direction using X-rays that interact with their grains.

The electrons in both IIE irons were pointed in the same direction, providing additional confirmation of their common source and suggesting their planetesimal indeed had a magnetic field roughly equivalent in size to the Earth’s.

The simplest explanation for the effect was that the planetesimal had a liquid metallic core that would have been “several tens of kilometers wide.” This implication suggests that previous assumptions regarding the speedy formation of planetesimals is wrong. This planetesimal must have formed over the course of several million years.

All of this got the researchers wondering where in this surprisingly complex planetesimal the meteorites might have come from. They partnered with scientists from the University of Chicago to develop models of how this all might have gone down.

Maurel’s team came to suspect that after the planetesimal cooled down and imprinted the magnetic field on the minerals, collisions with other bodies tore them away. She hypothesizes, “As the body cools, the meteorites in these pockets will imprint this magnetic field in their minerals. At some point, the magnetic field will decay, but the imprint will remain. Later on, this body is going to undergo a lot of other collisions until the ultimate collisions that will place these meteorites on Earth’s trajectory.”

It is unknown whether the planetesimal that produced the IIR irons was unusual, or if its history is typical for planetesimals. If so, the simple melted/unmelted dichotomy needs to be reconsidered.

“Most bodies in the asteroid belt appear unmelted on their surface. If we’re eventually able to see inside asteroids,” says Weiss, “we might test this idea. Maybe some asteroids are melted inside, and bodies like this planetesimal are actually common.”

Scientists turn to nature to improve a ubiquitous building material.
Up Next
The Present

The Anthropause is here: COVID-19 reduced Earth’s vibrations by 50 percent

The planet is making a lot less noise during lockdown.