One of the internet’s favorite mysteries has been what happens to an everyday grape nearly split in halves and put in a microwave: After about five seconds the grape produces a dramatic flash of plasma. Here’s what it looks like. Has this mystery been keeping you up at night? Even if it hasn’t, it’s been a puzzler. Now, though, a paper from three Canadian physicists has been published in Proceedings of the National Academy of Sciences, and it finally explains what’s going on. 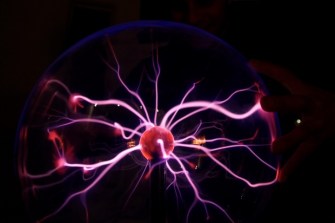 Plasma is the fourth state of matter, the others being solids, liquids, and gases. Most of the material in the universe, by a long shot, is plasma. Plasma starts with gas into which enough energy is introduced that it heats up and its electrons become excited to the point that they’re ripped away from their atoms and molecules. The result is plasma, a dynamic stew of negatively charged electrons frantically bouncing around positively charged air molecules and positively charged nuclei, or ions. Plasma’s light comes from its electrons flipping back and forth between excited and de-excited states in response to the energy driving the whole process. It’s technically a light-producing ionized gas.

A, D, and G show an optical image of grape halves. B, E, and H show their corresponding thermal images after irradiation. E. C, F, and I show simulations of the time-averaged energy density.

What the authors of the new paper wanted to figure out is what makes an innocent halved grape spit plasma when it’s microwaved. A popular theory has been that the production of plasma had to do with microwaves charging electrolytes in the water of each grape, leading to a sudden exchange of energy across the bridge of skin remaining between the two haves, resulting in a flash of plasma. The new research debunks this idea.

The study found plasma is also produced by hydrogel orbs, among other things.

How is the plasma being generated?

According to the paper, it’s the grapes’ size that’s ultimately responsible, since it turns out that a grape is the perfect size for capturing and holding microwaves. As microwaves collect inside one, they add to each other, becoming amplified to the point that they need to release all that energy and heat. The midpoint between two grapes side-by-side becomes a hot spot at which both halves release their energy, and plasma is produced.

In carefully documented experiments, the researchers tried different materials, sizes, and skins/coverings, and interrupted the plasma generation at different stages to reveal the progression of the process. Apparently a grape’s skin has nothing to do with it at all. The authors were able to produce plasma using a simple pair of hydrogel beads as well as gooseberries, large blackberries, and even quail eggs. They concluded that lots of things about the size of a grape with sufficient water content can produce plasma as long as the two objects are less than three millimeters apart.

What’s interesting about all this, in practical terms, is that grapes’ odd microwave-amplification ability could potentially be scaled up in size and lead to the development of passive microwave antennas that collect microwaves like man-made, oversized, synthetic, well, grapes.

Two hydrogel spheres oscillating— the video is slowed way down.

The researchers answered one riddle and wound up with another: They noticed that when two grapes or grape stand-ins are side by side in a microwave, they oscillate away and then back toward each other. Why? That’s the next thing the scientists plan to investigate.

World’s largest bee, thought to be extinct, found in Indonesia

The Megachile pluto is about four times the size of a honeybee.