The resemblance is uncanny: choanocytes, single-celled organisms found in sea sponges, look an awful lot like choanoflagellates. Since the former are believed to be the closest single-celled relatives of animals, scientists have surmised a connection that would make choanocytes the earliest predecessors to animals, including us.

“Most biologists for decades have believed this theory to be true,” says Associate Professor Sandie Degnan from the University of Queensland (UQ), Australia. “But their transcriptome signatures simply don’t match, meaning that these aren’t the core building blocks of animal life that we originally thought they were.”

Her assertion unsettles nearly settled evolutionary science. “We’re taking a core theory of evolutionary biology and turning it on its head,” says Degnan, co-senior author of a paper published in Nature on June 12 with UQ’s Professor Bernard Degnan.

The Degnans and their colleagues sequenced the genes expressed by sponge somatic cell types, which are believed to be similar to those present in the last single-celled common ancestor prior to the emergence of multicellular metazoans and ultimately, animals. Using the CEL-Seq2 gene-sequencing platform, they analyzed: 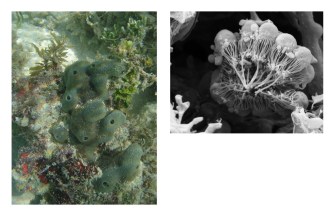 Amphimedon queenslandica, from which the study’s were taken (left), and a choanocyte chamber containing multiple choanocytes (right)

The researchers found “no support for the long-standing hypothesis that multicellular animals evolved from an ancestor that was an undifferentiated ball of cells resembling extant choanocytes and choanoflagellates.” Instead, the truth seemed to lay more in the flexible behavior of archeocytes. The researchers concluded that the “ancestral metazoan cell type had the capacity to exist in and transition between multiple cell states.”

In other words, says Professor Degnan, “We’ve found that the first multicellular animals probably weren’t like the modern-day sponge cells, but were more like a collection of convertible cells. And so, the “great-great-great-grandmother of all cells in the animal kingdom, so to speak, was probably quite similar to a stem cell.”

Associate Professor Degnan notes that modern genetic sequencing tools “helped us finally address an age-old question, discovering something completely contrary to what anyone had ever proposed.” As for the exact identity of our earliest single-celled ancestor, she adds, “Now we have an opportunity to re-imagine the steps that gave rise to the first animals, the underlying rules that turned single cells into multicellular animal life.”

Stand by the launch: The world’s 1st orbiting light sail

An elegant, 400-year-old means of navigating the stars takes flight.