Back in September 2016, NASA announced that nearby exoplanet Proxima b might have what it takes to sustain life. In December however, it announced that it gets bombarded with “super flares” from time to time by its star, Proxima Centauri, and so perhaps isn’t the best candidate. It was a letdown for those of us who marvel at the thought of intelligent life elsewhere in the galaxy, but this latest announcement might just make up for it. The odds are better at least.

Astronomers have found seven exoplanets inhabiting a nearby star. Now known as the TRAPPIST-1 planetary system, it resides about 40 light years away from Earth. Sounds close, but it would take us millions of years with conventional rocketry to reach it. NASA bigwigs recently made an announcement and held a press conference surrounding this discovery, from its headquarters in Washington, D.C.

The exoplanets revolve around an ultra-cool dwarf star, 10 times smaller than our sun. This newly discovered solar system is located in the constellation Aquarius. These seven planets are all potentially habitable, according to findings published in the journal Nature. They’re each about the size of Earth, which could mean a liquid surface and an atmosphere. More encouraging still, they’re all also within the habitable “Goldilocks” zone: not to cool, and not too hot. 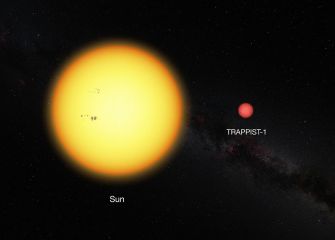 Our solar system is spread out by comparison. This cramped little system finds each planet’s orbit closer to their star, TRAPPIST-1, than Mercury is to ours. Of all the planets discovered, TRAPPIST-1f is the most likely to sustain life, NASA scientists say. Those closer planets may be too hot to contain liquid water, while those beyond may be too cold.

Michaël Gillon is an astronomer at the University of Liège in Belgium. He told NPR, “If you were on the surface of one of these planets, you would see the other ones as we see the moon, or a bit smaller.” On the surface of TRAPPIST-1f for instance, its sun would appear three times larger than ours. Yet, you’d receive 200 times less light from it, and you’d bask in red rather than white light. Krypton perhaps?

Last May, NASA scientists found three planets around TRAPPIST-1. After closer examination, they discovered four more, using the Hubble Space Telescope. Astronomers spotted these due to a dimming that occurs when a planet crosses in front of a star. In 2018, the James Webb Space Telescope will be placed in a specific location a million miles from Earth, giving astronomers’ unparalleled views, and exceptional capabilities never before obtainable. Astronomers will not only be able to detect large exoplanets, they’ll be able to prove whether or not a particular one has an atmosphere, by observing whether or not starlight filters through in a certain way. 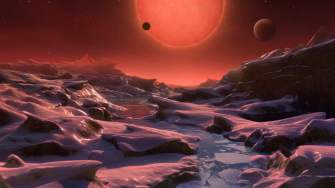 Amaury Triaud is an astronomer at Cambridge University and an author on this study. “I think we’ve made a crucial step towards finding if there is life out there,” he said. “I don’t think any time before we had the right planets to discover and find out if there was (life). Here, if life managed to thrive and releases gases similar to what we have on Earth, we will know.” More study might yield other information such as whether or not TRAPPIST-1f’s surface contains liquid methane, which might sustain some forms of life, or even water.

One fact however may stymie the search for E.T., in this solar system. Many of these planets, being so close to their star, are likely to be bombarded with ultraviolet radiation. Yet, this discovery, even if it doesn’t lead to alien life, which it still might, nevertheless hearten our search for it. It shows how common such exoplanets in the “Goldilocks” zone may be in our galaxy, even beyond. Another interesting consideration, this star, since it burns so slowly, will likely outlive ours by a trillion years. So if the Earth is vanquished and the situation is right, we may find a new Eden on TRAPPIST-1f.

We are effectively alone in the universe

It does not matter if intelligent life exists elsewhere. We will never find each other.
The Future

We are likely to see the first humans walk on Mars this decade.
Up Next
The Future