Scientists may have just discovered a new class of small black holes and a new method of searching for them.

In a study published October 31 in Science, astronomers describe how they discovered a black hole just 3.3 times the mass of the sun, making it the smallest known black hole in the Milky Way.

“We’re showing this hint that there is another population out there that we have yet to really probe in the search for black holes,” said Todd Thompson, a professor of astronomy at Ohio State University and lead author of the study, in a statement.

What Are “Black Holes?”

What Are “Black Holes?”

Black holes are mysterious regions of spacetime whose gravitational pull is so strong that not even light or radiation can escape. They form when massive stars die and collapse onto themselves. Studying these strange phenomena can tell us more about the evolution of the universe, and about elements back on Earth.

But to study black holes, scientists first have to find them. For years, black holes were known to exist only within a certain range of mass: about five to 15 times that of our sun. In 2017, however, scientists using the Laser Interferometer Gravitational-Wave Observatory observed two black holes merging together in a galaxy 1.8 billion light years away. The mass of one of the black holes was 31 times the mass of our sun – well outside the known range. 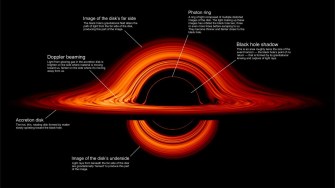 “Immediately, everyone was like ‘wow,’ because it was such a spectacular thing,” Thompson said. “Not only because it proved that LIGO worked, but because the masses were huge. Black holes that size are a big deal – we hadn’t seen them before.”

This discovery raised a question: Could there be other black holes outside the known range, only on the smaller side? To find out, Thompson and his colleagues combed through data from the Apache Point Observatory Galactic Evolution Experiment, which collected light spectra from around 100,000 stars in the Milky Way. The method was to look at changes in the light spectra of stars to see whether they might be orbiting an invisible companion – a small black hole. For example, a star whose spectra shifts to bluer wavelengths and then redder wavelengths could do so because it’s orbiting a small black hole.

Using this method, as well as data from the Tillinghast Reflector Echelle Spectrograph and the Gaia satellite, the team was able to spot a low-mass black hole that’s likely about 3.3 times the mass of the sun.

“What we’ve done here is come up with a new way to search for black holes, but we’ve also potentially identified one of the first of a new class of low-mass black holes that astronomers hadn’t previously known about.” Thompson said. “The masses of things tell us about their formation and evolution, and they tell us about their nature.”

How to build a fairer gig economy in 4 steps