First, that it’s big. In 2019, roughly one-in-10 workers in the UK earns a living in the gig economy. In the US, the equivalent figure is an estimated 8%. Earlier this year, there was a pan-African survey that showed that 1.3% of adult Africans now earn money from gig economy platforms (the online companies that provide the work). All over the world, a lot of people are now working in this realm.

Second, that the jobs being created are not necessarily of good quality. Because of the ways that platform work is organised, the practice seems to lend itself structurally to a number of undesirable outcomes for workers – who can suffer from low pay, wage theft, precariousness, dangerous working conditions and discrimination. When any of these issues arise, platforms simply tend to point to the fact that they aren’t responsible. They tend instead to present themselves as a simple intermediary rather than an entity that has the ability to shape actual on-the-ground working conditions. 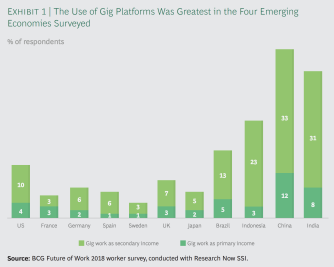 Here are four strategies we should be thinking about if we want to bring about a less exploitative gig economy.

1) We need more transparency about the nature of gig work itself. Users, investors, workers, and regulators all need to know more about the nature of the jobs being created and how they might fall short of decent work standards. To that effect, my colleagues and I have started the Fairwork project: an initiative that scores platforms against 10 criteria around fair work practices. Those scores can be used to directly compare platforms against one another.

2) We need more accountability within the sector. At the moment, many platforms operate in regulatory gaps, and often allege that existing regulation doesn’t apply to them. “We’re a technology company,” they will claim – rather than recognise that they are in fact a high-tech taxi company, food delivery company or cleaning company, and so on. We therefore need to ensure that work and workers are either protected by existing regulation or we need to develop new approaches.

3) We should acknowledge that transparency and regulation will only get us so far. Real change will happen when workers are able to collectively rather than individually negotiate with their bosses. Gig workers are often treated as individual businesses who should compete against one another. But it is once they come together as colleagues that they can collectively bring about better wages and working conditions.

4) Finally, the real future of the gig economy that we should be looking to is one characterised by democratic ownership. There is no reason why gig workers shouldn’t be their own bosses. The platform cooperativism movement shines a light on some of the real potentials for worker owned- and managed-platforms for every possible service. We can also think about running platforms as civic utilities. In many places, platforms are becoming utilities. Consider Uber’s desire to become an “operating system for your everyday life”. Our cities will undoubtedly need operating systems. But we should ask ourselves whether we want a privately managed operating system run by an unaccountable company based in another country – or a locally-managed, locally-owned, democratic and accountable one.

We can’t turn back the clock to a world with no platforms. But by looking to strategies that involve transparency, accountability, worker power and democratic ownership, we have in front of us the tools to move towards a less exploitative and more just platform economy. The platform economy in 2030 could be one in which consumers know more about their impacts, regulators are enforcing minimum standards, workers are exercising their collective power, and we have all found ways of building, supporting, and using democratically run and accountable gig economy platforms.

Mark Graham is co-author of The Gig Economy: A Critical Introduction.

Experts say we should only be working 15 hours per week, so why are some working 80?
▸
6 min
—
with
James Suzman
Neuropsych

You don’t need to completely automate a job to fundamentally change it.
Diversity & Inclusion

A textbook pregnancy consists of three trimesters. The baby develops at a relatively predictable rate during this time, from pomegranate seed to avocado to watermelon. And mom’s body adapts accordingly […]
Up Next
Neuropsych

A new study says curiosity and creativity are computational errors.