It’s no secret the keto diet can help people lose weight by switching the body’s primary fuel source from sugar to fat. What’s less clear is whether the diet can reliably produce other health benefits, like clearer skin, increased mental clarity or even the reversal of conditions like type 2 diabetes.

One reason it’s hard to determine the exact health effects of diets is that it’s often unclear whether any observed effects come from the diet or from a combination of other factors, like stress, environment or genetics. Still, that doesn’t mean all the bold claims about the keto diet are wrong, but rather that you should approach them with a healthy degree of skepticism.

Here are three potential benefits of the keto diet that, while speculative, show how we might benefit from a better understanding of how a high-fat, low-carbohydrate diet affects the body.

The keto diet can combat acne

Dermatologists had long thought there was no relationship between diet and acne, but some recent research suggests food can indeed affect complexion, particularly through the consumption of carbohydrates.

Several recent studies have linked the consumption of high-glycemic-index foods (meaning foods that spike blood sugar levels) with acne, including:

So, how might the keto diet be an effective therapy for acne? A 2012 article by Italian researchers explored that question, as registered dietician Franziska Spritzler wrote for Diet Doctor, suggesting three reasons:

Of course, whether – or to what extent – diet affects acne is still an open question that requires further research, and it’s worth noting that complexion is also affected by other factors like genetics and stress. 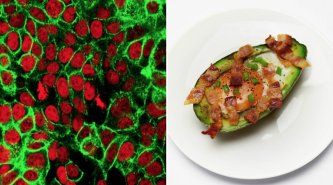 One of the boldest claims about the keto diet is that it can help combat cancer by effectively “starving” cancer cells. It’s a claim based on a phenomenon dubbed the “Warburg effect”, which, in simple terms, describes how cancer cells are more reliant on sugar than healthy cells. So, the idea is that sticking to a low-carbohydrate diet will make it harder for cancer cells to thrive.

“Because cancer cells prefer to use glucose, diets that limit glucose may be beneficial,” Barbara Gower, PhD, senior author and professor in the Department of Nutrition Sciences, told Healthline. “Because they limit glucose and several growth factors, ketogenic diets will limit the ability of cancer to grow, which gives the patient’s immune system time to respond.”

Here’s how the process might work, as Dietarytherapies.com outlined:

This weakened state can make cancer cells more vulnerable to traditional cancer treatments like radiation and chemotherapy. At least, that’s the theory promoted by Dr. Thomas Seyfried, a cancer researcher and professor at Boston College who’s been one of the most vocal proponents of exploring the potential cancer-fighting effects of the keto diet.

“It is like a one-two punch, stressing them with starvation by ketones, then hitting them while they are down,” Seyfried told Diet Doctor.

Although some animal studies hint at therapeutic benefits, more research on the keto diet and cancer is required before it can be safely recommended as a supplementary or standalone treatment.

“Most of the work in this field is still pre-clinical, meaning it’s been conducted in animal models,” Angela Poff, a research associate in the Department of Molecular Pharmacology and Physiology at the University of South Florida, told U.S. News & World Report. “It’s been done in various cancer types, but most of the work has been done in brain cancer specifically. But there’s very little clinical data all around. There’s some case reports and very small preliminary clinical studies in small groups of patients, usually very late-stage patients with various types of cancers. So in the clinical realm, which is the most important in telling us whether this is going to be useful, we have a long way to go.”

The keto diet is often said to increase mental clarity, and even to help with conditions like anxiety and depression. Although most of the evidence supporting these claims is anecdotal, there is some reason to think a low-carbohydrate diet might help clear up what’s commonly called “brain fog.”

But when you consume a high-carbohydrate diet, your brain often can’t convert enough glutamate into GABA because it’s using glutamate as an energy source. This imbalance can lead to neurotoxicity, and this impaired functioning could potentially lead to brain fog. For reasons not completely understood, ketosis seems to favor an increased production of GABA, which can lead to reductions in neurotoxicity and, therefore, brain fog.

Still, research on the relationship between the keto diet and mental clarity, as well as anxiety and depression, is still in its early stages, and not all people who try the keto diet report noticeable changes in the ways they think. In fact, some people report an increase in brain fog after switching to the keto diet, though this might be explained by the “keto flu”, which describes the flu-like symptoms people tend to experience in the first few weeks after beginning the keto diet.

If you want to escape the negativity, head to Kazakhstan.
Up Next
The Present