What you should eat has been the focus of fad diets for decades. Less discussed is when. Thanks to the rise of the ketogenic diet, intermittent fasting has become trendy. Getting into ketosis is possible through a high-fat diet, yet is beneficially aided by fasting. While the science is up for debate on the efficacy of long-term usage of high-fat intake, limiting the duration of your grazing habits seems to have important benefits.

Grazing is one word for it. As nephrologist Dr. Jason Fung, the founder of Intensive Dietary Management Program who specializes in type 2 diabetes and intermittent fasting, points out, one study revealed that the median daily intake of food was 14.75 hours a day.

In fact, over half of the people in that study ate for over 15 hours every day, meaning if they their first meal (or snack) was consumed at 8 am, their last meal wouldn’t occur until after 11 pm. These data come from Salk Institute professor Satchin Panda’s study, which was tracked by a smartphone app.

Over the course of three weeks, healthy, non-shift workers tracked their eating habits by pressing a button delivered by the app. In total, 26,676 intake events occurred: 22 percent were water, 28 percent pre-packaged food items, and 50 percent mixed meals with multiple items. Another follow-up study tracked participants for sixteen weeks. Less than 25 percent of calories occurred before noon, with 37.5 percent eaten after 6 pm. This is a problem, Fung says.

What is intermittent fasting?

First off, the least frequent eaters in Panda’s study consumed food an average of 3.3 times a day, close to the basic folk wisdom of “three square meals.” They only represented 10 percent of the population. That means 90 percent ate more than 3.3 times a day. In fact, many ate a lot more.

Despite what you’ll read on holistic blogs everywhere, the type of food was not nearly as relevant as the time that they were actually eating. Fung continues,

When those overweight individuals eating more than 14 hours per day were simply instructed to curtail their eating times to only 10 to 11 hours, they lost weight (average 7.2 lbs, or 3.3 kg) and felt better even though they were not instructed to overtly change when they ate.

Fung cites another study that traced a restricted feeding schedule, known as early Time Restricted Feeding (eTRF). Two groups ate the exact same diet. One consumed their meals between 8 am and 8 pm, while the other chowed down between 8 am and 2 pm. All volunteers in this study were pre-diabetic.

The benefits were huge. Mean insulin levels dropped significantly, and insulin resistance dropped as well. Insulin is a driver of obesity, so merely changing the meal timing and restricting the number of hours you ate, and also by moving to an earlier eating schedule, produced huge benefits even in the same person eating the same meals. That’s astounding. Even more remarkable was that even after the washout period of seven weeks, the eTRF group maintained lower insulin levels at baseline. The benefits were maintained even after stopping the time restriction. Blood pressure dropped as well. 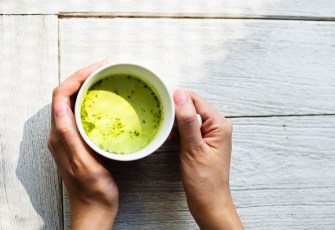 Fung notes that green tea is an important tool in helping those trying to fast.

Fung argues that while it’s not actually difficult to fast for sixteen or eighteen hours a day—I concur, having tried it for two months; your body quickly adjusts—eating dinner at 2 pm presents a serious challenge to the way our society is structured.

What Fung is really interested in is changing the narrative around diet. Sure, too much sugar is not good; fresh produce and whole grains are most often a better decision than processed foodstuffs littered with preservatives. Not every body can handle too much caffeine, which affects sleeping patterns, which affects metabolism, which leads to obesity. Nuance is important.

Fung is advocating is for a broader discussion of when. Given all we’ve been learning about the importance of circadian rhythm (which can now be measured in our your blood), we’re discovering that even a few hours of fasting a day can have profound consequences. Magical elixirs might not help you lose weight, but deciding not to drink them just might.

5 rules to build your version of the simple life

Because there’s not enough Walden pond to go around.
The Future

Exercise culture is crazy. But what you need to do is exceedingly simple.
▸
with
Daniel Lieberman
Up Next
Life

‘Aquatic life is bathing in a soup of antidepressants,’ says marine biologist

Antidepressants are destroying underwater ecosystems, which we in turn eat.