For every great evolutionary innovation, there is a new way for things to go wrong.

Multicellularity allowed for more complex organisms, but those organisms became susceptible to cancer. The evolution of asymmetric cell division was a boon that prevented damaged cells from proliferating but also created the mechanisms which cause us to age. Blood cell traits that help prevent malaria can also cause sickle cell anemia. Improvements in our brain power can lead to mental illnesses that no other animal can get. In short, it seems that our own genetics can be both a blessing and a curse.

While this is interesting in and of itself, a team of researchers led by Dr. Mary Benton of Baylor University recently published an essay in Nature Reviews Genetics on the influence of evolutionary history on human health and disease and possible new approaches to treating ailments caused by our own genetics. Their essay considers how evolution accidentally made us susceptible to certain diseases and how genomics might be used to improve health outcomes. 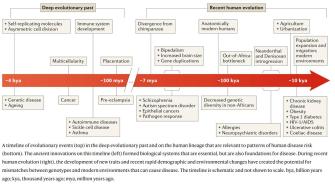 As the above chart shows, evolutionary advances that impact our health occurred at various points in history. As the environment, both natural and social, changes, traits and adaptations that worked really well in the past can become a source of problems. Consider, for example, the tendency of humans to want sweet foods that were once rare. This was likely a useful trait to have when it evolved, but the surplus of sweets we have these days has resulted in an obesity epidemic. Outside of its original context, a once adaptive trait can become maladaptive.

Understanding the context within which certain traits entered the human genome can shed light on why they are now causing problems. This can yield further insights on population genetics and even personalized medicine. As the authors put it:

“Much like a family’s medical history over generations, the genome is fundamentally a historical record. Decoding the evolution of the human genome provides valuable context for interpreting and modeling disease.”

“While most of the variations that impact disease risk evolved recently, they are part of more complex systems that go much further back. With our improving understanding of how these variations interact with our modern environment, society, and cultures, doctors can potentially begin to use a patient’s genetic history to help craft personal care plans.”

An evolutionary understanding of disease

While evolutionary takes on disease are not currently used for most conditions, the capacity for medical professionals to do so is increasing. The authors mention the potential ofpolygenic risk scores, a recently developed technology that estimates the effect of a subject’s genetics on their health, as a possible application of evolutionary history on individual health.

While not everyone can get a full genome record at this moment, the possibilities of using our evolutionary history in medicine are tremendous. Dr. Benton spoke to these possibilities with the Baylor University News Service:

“If we can better understand our genomes, then we can better understand risk for disease broadly, but also for specific people. Understanding how genetic variants relate to disease can help us tailor treatments, preventative measures, or drugs. Evolution plays into what variants we have, which variants have stuck around, which people they are present in, and why. I think evolution gives us context for what we want to use in the clinic moving forward.”

Becoming less physically active as you get older is not inevitable.
Up Next
Critical Thinking

Beware the corporate cult of personality

What do communist dictators Joseph Stalin and Mao Zedong have in common with U.S. Presidents like John F. Kennedy and Ronald Reagan? Hint: It’s the same thing they have in […]