A new study suggests that using marijuana in your teenage years may prime your brain to respond positively to your first experience with cocaine. The findings offer molecular insight into the question of whether marijuana is a gateway drug. After all, studies have repeatedly shown that having a good first experience with a drug makes you more likely to use it again, and therefore potentially become addicted.

The study is published in the journal PNAS.

“We know from human epidemiological studies that individuals who abuse cocaine have a history of early cannabis use, and that a person’s initial response to a drug can have a large impact on whether they continue to use it. But many questions remain on how early cannabis exposure affects the brain,” epidemiologist Denise Kandel, PhD, a professor of Sociomedical Sciences in Psychiatry at Columbia’s Vagelos College of Physicians and Surgeons and co-senior author of the new study, told Science Daily.

In the study, researchers gave a synthetic psychoactive cannabinoid called WIN 55,212-2 (WIN) to adolescent and adult rats. Then, both groups of rats were given cocaine, and the researchers monitored how the animals responded. 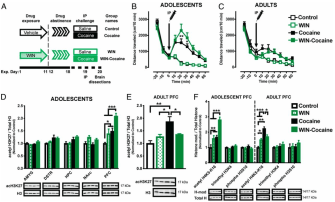 Fig 1. Cross-sensitization between WIN and cocaine in adolescent rats is associated with histone hyperacetylation in the PFC.

The results showed that young rats who had been exposed to WIN were more sensitive to the effects of cocaine. This early exposure “reprograms the initial behavioral, molecular, and epigenetic response to cocaine” in young rats. These changes were not observed in adult rats.

Past research has shown that young rats that have been exposed to cannabinoids become “cross-sensitized” to cocaine, and that cross-sensitization can alter the extent to which rats crave cocaine and experience withdrawal symptoms.

The new study took a close look at how cannabinoids prime bodily systems for cocaine.

Changes in the prefrontal cortex

One such system is the endocannabinoid system, which is impaired by the use of cannabis or cannabinoids. Studies have linked impaired endocannabinoid signaling with increased stress responsivity, negative emotional states, and drug craving.

“The endocannabinoid system has a modulatory role in brain reward and cognitive processes,” the researchers wrote. “It has been hypothesized that repeated interference with endocannabinoid signaling (e.g., through abuse of cannabis or synthetic cannabinoids) can remodel the adolescent brain and make it respond differently to more addictive substances, such as cocaine. In the present study, we demonstrate that a history of synthetic cannabinoid exposure in adolescent animals results in distinct molecular and epigenetic changes following initial exposure to cocaine.”

In addition to affecting the endocannabinoid system and (potentially) the glutamatergic system, the study found that early cannabinoid use seems to cause epigenetic changes in the prefrontal cortex. This area of the brain controls executive functions like long-term planning and self-control.

“Our findings suggest that exposure to psychoactive cannabinoids during adolescence primes the animals’ prefrontal cortex, so that it responds differently to cocaine compared to animals who had been given cocaine without having previously experienced cannabis,” study co-senior author Philippe Melas told Science Daily.

One consequence of priming the prefrontal cortex in this way seems to be that cocaine becomes more enjoyable.

“This study suggests that teenagers who use cannabis may have a favorable initial reaction to cocaine, which will increase their likelihood of engaging in its repeated use so that they eventually become addicted, especially if they carry additional environmental or genetic vulnerabilities,” Kandel told Science Daily.

The researchers noted several limitations in their study, including:

They also noted that someone won’t necessarily develop an addiction if they happen to have a good first experience with a drug. Still, they suggested that research like this can help to develop better treatments for substance abuse disorders.

“These and other experiments are key to understanding the molecular changes to the brain that occur during drug use,” said Dr. Eric Kandel, who is also University Professor and Kavli Professor of Brain Science at Columbia. “This knowledge will be crucial for developing effective treatments that curb addiction by targeting the disease’s underlying mechanisms.”

How does one supernova get so bright, so energetic, and so massive? It’s a spectacular mystery to solve.On February 22, 2016, one of humanity’s automated sky-scanning telescopes — the Pan-STARRS Survey for Transients — reported […]