One of the biggest fears around vaccines, however unwarranted, is that they’re “unnatural.” Adjuvants that help improve vaccine response, such as alum, squalene, and paraffin oil, have been demonized by the anti-vaxx movement. This trend has resulted in over one-third of Americans claiming they won’t get a SARS-CoV-2 vaccine when one is produced.

With over 200 vaccine trials underway, chances that 2021 will result in a reliable vaccine are high. Those worried about the “unnatural” means by which vaccines are produced may take comfort in a groundbreaking new development.

Many vaccines are traditionally incubated in chicken eggs. The annual influenza vaccination is a common example. The process is delicate, however: US government facilities are hidden and highly secure. This method is costly, as every dose requires at least one egg. Tens of millions of chicken eggs are used for this purpose in America every year.

There’s another important cost: time. While a plant-developed VLP vaccine takes roughly two months to develop, egg vaccines take up to a half-year to produce. With plants, you get a vaccine quicker and without ethical concerns for the strain on chickens.

By contrast, Nicotiana benthamiana grows in rugged environments throughout Australia. It can grow up to five feet tall. The frail leaves have made it an exceptional candidate for plant research and have been used for decades in plant virology. An experimental drug, ZMapp, developed to treat Ebola, was designed using this plant. While not without risks, the WHO claims ZMapp’s benefits outweigh the risks, and has approved its usage in cocktail treatments. 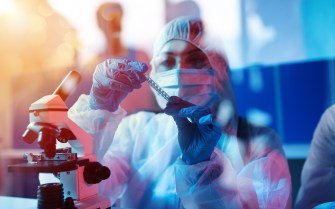 Clark says it’s important to attack the novel coronavirus from all sides.

“Creating a sufficient supply of COVID-19 vaccines within the next year is a challenge which will require multiple approaches, with different technologies. Our proven plant-based technology is capable of contributing to the collective solution to this public health emergency.”

Unlike many common vaccines, VLP vaccines contain no genetic material. You won’t get infected by it, which is always a risk in live vaccines.

This SARS-CoV-2 vaccine is not the only project on Medicago’s hands. The company just completed phase 3 clinical trials on an influenza. While no plant-based vaccine has been approved for use, the company hopes to replace the more cumbersome and expensive egg-based model, or at least offset some of the costs of that model. The plant model could help researchers adapt more quickly to the ever-changing influenza strains each season.

Plants offer a wonderful alternative to the current vaccination model. Besides price, VLP vaccines scale much easier and faster. If the SARS-CoV-2 vaccine works, Medicago believes they can produce a billion doses a year, by far the most ambitious yield to date. At a time when speed, cost, and reliability are all essential factors in vaccine development, we should put tobacco to better use: healing instead of harming.

These salamanders are helping unlock the mysteries of brain evolution and regeneration.
Up Next
High Culture

Here’s the innovative writing tool you’ve been waiting for

WhiteSmoke Grammar Checker keeps your spelling and grammar issues at bay while also working as a translator.