Humans are aging. Of course, this is the natural biological course, but entire societies are getting older, causing concern among governments. Increased older populations result in higher health care costs and less productive work forces. Yet none of this implies that we must go quietly into the night. Good health is negotiable, if you’re willing to put in the work.

There are many domains once reserved for the young that aging adults now recognize as accessible. Maintaining a healthy body and mind well into old age is one. For example, one yoga teacher I used to study with just turned 101, and she still regularly teaches classes. As more research is conducted on the effects of exercise on aging populations, the more good news there is to share.

Silicon Valley might be focused on defeating aging, yet for those of us that cannot afford hundreds of thousands of dollars for unproven vitamin regimens, a new study, published in Frontiers in Physiology, found that building muscle mass in your seventies and eighties is just as possible for non-exercisers as master athletes. As the study states,

Gone is the excuse “I’m too old to exercise.” A research team at the University of Birmingham gave isotope tracers to two groups, one comprised of lifting newbies and the others of athletes that have trained their entire lives (and still compete). Each group then completed a single exercise session on a machine.

The team, led by Dr. Leigh Breen, compared each participant’s resting and exercise-induced states over a 48-hour period, focusing on integrated myofibrillar protein synthesis (iMyoPS). Initially, the researchers believed seasoned athletes would have an increased ability to build muscle over their sedentary counterparts. That turned out not to be the case.

To be clear, athletes exhibit greater markers of strength, VO2max, and overall conditioning, which is to be expected. The purpose of this study was to discover if unconditioned seniors could build muscle at the same rate as their conditioned peers. As Breen puts it,

“Our study clearly shows that it doesn’t matter if you haven’t been a regular exerciser throughout your life, you can still derive benefit from exercise whenever you start. Obviously a long term commitment to good health and exercise is the best approach to achieve whole-body health, but even starting later on in life will help delay age-related frailty and muscle weakness.” 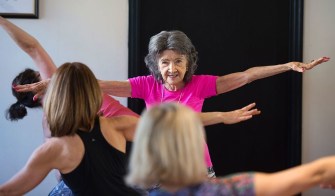 Sarcopenia is another consequence of time: as we grow older, we lose skeletal muscle mass. Resistance training is a necessary response to this biological destiny. Forcing your body to bear a load—to carry water from the river or fix a thatched roof—was not a choice for most of human existence. Conveniences in modern life have allowed us to become sedentary, which we’ll always going to pay the price for unless we purposefully fight against it.

As Breen notes, there are many ways to integrate resistance training into your life. Not all of them require ripping out sets at the gym. Daily activities such as carrying groceries (and grandchildren) help offset physical decline. The key is structure.

While every individual requires a different movement diet for optimal fitness, some form of regular routine is beneficial both physically and mentally. One of the top excuses I’ve heard over many years of teaching group fitness is that “I just don’t know what to do.” Fortunately there is an easy remedy, given the endless amount of free content available on Youtube and Instagram (or for more targeted routines, by hiring a trainer). Goal-setting is important in life but essential when it comes to exercise routines.

Fitness is important throughout life, especially given evidence of excess health care costs that could be avoided if we ate better and moved more. This new addition to the literature is a small contribution with big consequences. Just 15 participants were tested over one session. It is likely that larger sample sizes would produce similar results, though we won’t be sure until those studies are conducted.

The result of this study, however, reminds us that it’s never too late to begin exercising. Any excuse to the contrary can likely be changed. It’s a good thing that minds are designed to be malleable, just like bodies.

Becoming less physically active as you get older is not inevitable.
Up Next
Hard Science

This incredible meditation will help solve your existential dread