According to a recent survey of American millionaires, only 13 percent reported feeling wealthy. Many respondents in control of more than $5 million in assets and savings claim that they don’t feel rich. Tied into this research is the question of happiness: How can millionaires not feel happy?

Interestingly, research shows that when someone wins the lottery, their neighbors often go into debt; some even claim bankruptcy. They were trying to keep up with the newfound luck (and capital) of that family across the lawn. Another study found that the more your neighbor earns, the less happy you’re likely to be. Yet what about the lottery winner, many of whom also go bankrupt? Why does this sudden injection of cash not satisfy them? Is there not happiness to be found there?

The answer is simple: humans aren’t designed for happiness.

That’s what Rafael Euba, a Senior Lecturer in Old Age Psychiatry at King’s College London, argues in a new essay. Like all the other animals, we are “designed”—by evolution, to be clear—to survive and reproduce. Happiness is not the mainstay of our operating system.

Euba even argues that we’re not designed to be content, a fact backed up by a simple biological trait we all experience in life: the chase. Whether a romantic partner, job, or dream house, we put extreme effort into pursuits that, when we achieve them, are quickly forgotten. Adrenaline subsided, our attention nearly immediately goes elsewhere. That thing we swore would make us happy let us down; or, better put, our expectations of that thing did not meet the reality.

This does not have to be the case; with discipline and focus, we can continue to cherish that which we fought for. Such a mindset requires effort. Like happiness, satisfaction is not natural to us, though we can work for it. 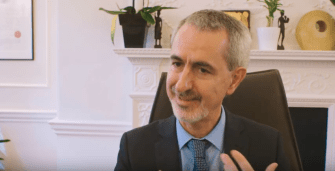 Euba writes that if humans are “built” for anything, it’s depression. Ruminating over difficult times helps you problem solve and figure out means for surviving after trauma. He continues,

“Experts in this field argue that nature’s failure to weed out depression in the evolutionary process (despite the obvious disadvantages in terms of survival and reproduction) is due precisely to the fact that depression as an adaptation plays a useful role in times of adversity, by helping the depressed individual disengage from risky and hopeless situations in which he or she cannot win.”

Still, happiness is baked into our national identity as the optimal goal. Again, such states need to be earned, proving they are not natural states. Though you’ll find plenty of misquotes by the Buddha about striving for happiness, Buddha knew that happiness was a fleeting and therefore unsustainable goal. His solution called for equanimity and the expression of compassion with a touch of contentment thrown in. The sagely leader recognized that ups and downs were part of life. Best to remain composed while riding the inevitable waves.

Perhaps that’s why America has become such a depressed nation. With so much emphasis on the “pursuit of happiness,” we consistently feel behind when we can’t keep up with our (lottery-winning) neighbors. We aren’t content because we can’t match the life we ourselves envisioned, no matter how ludicrous the initial goals were. A life pursuing entertainment and pleasure at every turn is hedonic; even biblical scribes knew there was a problem with that. Euba places at least part of the blame on Christianity, writing,

“The current global happiness industry has some of its roots in Christian morality codes, many of which will tell us that there is a moral reason for any unhappiness we may experience. This, they will often say, is due to our own moral shortcomings, selfishness and materialism.”

Then why do we chase happiness at every turn? Another biblical clue: money.

The American “happiness industry,” fueled by positive thinking, is valued at $11 billion. Though few people are truly concerned about your personal happiness, plenty want to sell you the idea that it should be everlasting—with their product or service, of course. Type “happiness” into the Books section of Amazon and over 50,000 results appear.

This happiness complex is especially problematic in America. As Barbara Ehrenreich writes in Bright-Sided, America ranked only 23rd in roughly a hundred countries self-reporting happiness. Yet we account for two-thirds of all antidepressant usage in the world, with antidepressants being our most commonly prescribed drug.

She notes that positive thinking and the incessant drive for happiness “requires deliberate self-deception,” with its adherents constantly needing to repress self-criticism or negative thoughts. She continues,

“The truly self-confident, or those who have in some way made their peace with the world and their destiny within it, do not need to expend effort censoring or otherwise controlling their thoughts. Positive thinking may be a quintessentially American activity, associated in our minds with both individual and national success, but it is driven by a terrible insecurity.”

Euba notes that neurologically speaking, our brains can manage both positive and negative emotions simultaneously, relatively independent of one another. This provides a jump over those mental hurdles as you recognize “the knowledge that dissatisfaction is not a personal failure.” Feeling down is not a shortcoming in need of immediate repair, but simply part of the fluctuations of life. It is, he concludes, “what makes you human.”

Living at a higher elevation is a double-edged sword.
Up Next
Starts With A Bang

Most of the Moon’s effects on Earth are small and imperceptible. But for the grunion, it’s absolutely essential.Although it’s the closest astronomical body to Earth, the Moon is still a […]