A 2013 paper written by Nick Drydakis, professor at the School of Economics, Finance, and Law at Anglia Ruskin University (UK), suggested a link between more frequent sex and higher income rates. The initial hypothesis of this study was that the medical, psychological, and physical positive effects of sexual activity (good health, endurance, mental well-being, etc.) could influence wage factors in working adults.

The hypothesis was proven to be correct – according to the results of this study, employees who are having sex more than four times per week reported receiving statistically significantly higher wages than those who reported having less sex. 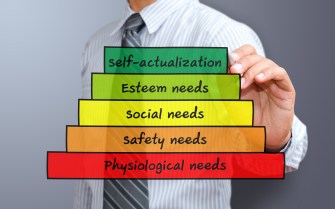 When our basic needs are being met, we are more motivated to excel in our careers, earning (and saving) more money in the process.

Image by Shutter_M on Shutterstock

The study referenced Maslow’s Hierarchy of Needs, which outlines the basic human needs that need to be met before other motivations for better-living occur. This has been deemed as a “theory for human motivation,” as American psychologist Abraham Maslow stated that when these needs are met, the individual can lead a happier, more fulfilled life.

The five basic needs are:

Several studies (including this University of Illinois study) have supported Maslow’s Needs theory, with the caveat that the definition of having these needs met can vary depending on where in the world you live.

The link between Maslow’s Needs and your sex life

While there are many ways to fulfill Maslow’s Needs, a healthy sex life (or happy relationship) checks a lot of the boxes.

Safety and belongingness are qualities often associated with relationships, either romantic or platonic. Whether it’s a lifelong friendship or a close intimate one, that human connection satisfies the second level of Maslow’s hierarchy.

Esteem for Maslow refers to the need for respect, self-esteem, and confidence. Confidence and high self-esteem have been directly linked to active sex lives and vice versa, according to Harvard Medical School.

Self-actualization represents the highest motivations that we have as human beings. These are things that drive us to realize our full potential and help us become our most ideal self. According to this 1995 study published in Psychological Reports, self-actualization and empathy are key predictors of high marital satisfaction.

The reasoning behind Maslow’s Needs is that if these basic human needs aren’t being met, the human will not be able to function or thrive in society. People who have these needs met are happier, more fulfilled individuals, and are more successful in work and relationships. The more successful you are in your career, the better chance you have for higher-income jobs or salary bumps.

A healthy, active and happy intimate/sexual relationship is key to accomplishing Maslow’s 5 Needs, which in turn is critical to helping you land a high-income job that you care about. 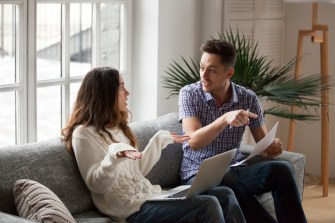 “Of all the intimacies you share, the sharing of money sparks the most arguments and creates the most resentment and confusion.”

Photo by fizkes on Shuttestock

Couples in successful relationships have mastered the skill of “financial harmony”

A recent FFCI (Forum for Family and Consumer Issues) study which took place over a period of two years and included a total of 161 participants showed a direct link between what is described as “financial harmony,” or agreeance over financial roles and ideas, and happiness of the overall relationship. The study was completely voluntary and confidential.

Money can be a major cause of conflict and stress in relationships and because of this, there is a significant link between good finances and happy relationships. More than 60% of participants in this survey stated that financial problems increased the amount of stress in their romantic lives.

Citing an article by Felton-Collins and S.B. Brown, the authors of the FFCI study wrote that “Of all the intimacies you share, the sharing of money sparks the most arguments and creates the most resentment and confusion.“

Marriage therapist Barton Goldsmith is quoted saying that “couples may find it harder to talk about money than about sex.” This idea that sex is a delicate and controversial topic even in the most intimate relationships furthers the notion that being in “financial harmony” with your significant other is a key to a successful long-term relationship.

The impact of sex on your finances, and vice versa, according to a marriage therapist

If given a choice between answering two questions (your favorite sex position or how much money was in your savings account right now), most people would choose to describe intimate details of their sex lives rather than list a number in a bank account. Why? Because sex is easier to talk about than money.

Sex is fun, interesting, and feels good – money is known to cause stress. Add to that each person’s individual history and view on finances, and you can understand how talking about finances in any kind of romantic relationship can feel extremely difficult.

“Couples who are experiencing financial strain have a higher likelihood of experiencing disruptions or difficulties in the bedroom”, she explains in a 2015 interview. “I see more and more with the strain that the economy/financial impact has on couples that there is a decrease in interest and a feeling of disconnection, which plays out sometimes by withholding or shutting down among partners.”

Why, exactly, don’t you trust that person’s opinion?
Up Next
Health

Finding ‘patient zero’: The challenges of tracing the origins of coronavirus

Will identifying patient zero curb the spread, or just cause stigma?