France plans to close all of its coal-fired power plants by 2021, a move that doubles down on the country’s relatively aggressive push toward renewable energy.

Macron said the pledge would be a “huge advantage in terms of attractiveness and competitiveness,” suggesting that the move away from fossil fuels isn’t a zero-sum game.

“We should stop opposing on one side productivity, on the other side climate change issues,” he said.

France only gets about 1 percent of its power from coal. But in the U.S., coal remains a much larger part of the power supply mix, accounting for about 16 percent of energy production in 2016. It’s also a more controversial political issue.

In June 2017, President Trump announced the U.S. would drop out of the Paris Agreement on climate change. Months later, in October, the Environmental Protection Agency announced the repeal of the Clean Power Plan, a policy drafted under the Obama administration that would have pushed states away from coal production. 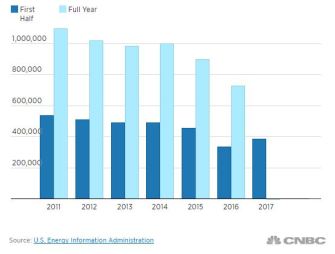 Coal was a cornerstone of Trump’s presidential campaign. He won nine out of ten states with the highest coal production in the country after promising to revive the industry and put thousands of unemployed coal miners back to work. But since his election, employment rates in the mining industry have remained mostly stagnant. The relatively cheap cost of natural gas seems to be the cause. And, incidentally, it’s this competition that could help the U.S. hit emissions goals set by the Obama administration—even without the Clean Power Plan in place.

Since signing the Paris Agreement in 2015, at least 15 countries have pledged to phase out coal. The U.K. and Italy plan to close all of their coal plants by 2025; the Netherlands by 2030. China has reduced coal consumption three years in a row, and halted the construction of about 100 new coal-fired plants.

Still, coal is hard for some countries to resist. It’s cheap, found in politically stable areas, and easy to extract. 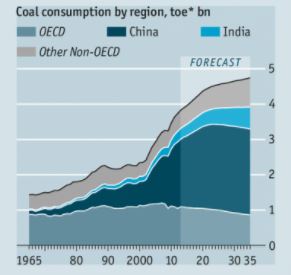 India, for instance, plans to nearly double its coal production by 2020. Even Japan, a country desperate for stable energy sources after closing its nuclear reactors in the wake of the Fukushima disaster, has plans to build new coal-powered facilities.

It seems coal won’t be phased out of the global power mix until alternative energy sources become cheaper. And so far, natural gas and renewable energy don’t quite cut it.

Discovered in 1900, the Saint-Bélec slab languished unrecognized in a castle basement for over a century.
The Present

Less pollution during COVID-19 is not a ‘silver lining’, says UN environment chief

The environmental benefits of the coronavirus pandemic are only temporary, warns the head of the UN Environment Programme.
The Present

In France, ancient forests are resurging — growing bigger every year

France’s forests are even creeping up on their major cities.
The Present

High in the Alps, where it’s ‘not supposed to melt,’ a rare glacial pond has been discovered

It is rare for them to form, nonetheless reach this size.
The Present

The disappearance of Saudi journalist Jamal Khashoggi has caused international controversy.
Up Next
The Present

Pope: ‘Fake news started in the Garden of Eden’

Pope Francis’ 2018 World Communications Day message explains the dangers of fake news and what journalists and the public must do to combat it.