Tourism is a conspiracy of euphemisms. Visitors only want to see the best parts of the places they visit. And the places they visit only want to show them their nicest bits. But now, Norwegian activist/artist Markus Moestue is completely reversing that premise. His ‘Critical Tourist Map’ of Oslo shows the worst, most shameful parts of the Norwegian capital. “It’s just like a normal tourist map,” he says, “but everything is negative.”

In a clip on his website, he’s seen wheeling a self-made kiosk across Oslo to distribute his work to passersby: “You guys want a free tourist map? It’s a critical one: only negative things. So, nothing about sweaters or lasagna, only negative stuff about Oslo and Norway.” Some hesitantly accept the map. Most walk by, nonplussed.

In the same clip, Moestue muses: “If you feel like you live in the best country in the world, take a moment to consider: Is that really a fact? Or is that just the result of a very successful national propaganda?”

One thing is for sure: Norway does have a very positive opinion of itself, and successfully projects that image to the rest of the world. Like its neighboring countries in Scandinavia, it regularly tops global rankings of happiness, equality, eco-awareness and other positive social indicators.

But Moestue argues that there is something rotten in the state of Norway, and he uses the otherwise irrepressibly positive medium of the tourist map to make his point.

“The Critical Tourist Map of Oslo might help you shatter a few myths about the greatness of Norway. Among the topics you’ll learn about is Norway’s aggressive foreign policy, our involvement in colonial slavery, the unfair asylum system and why Amnesty International has their eyes on our prisons.”

A short overview of the places and issues he singles out (see map for full text) follows. 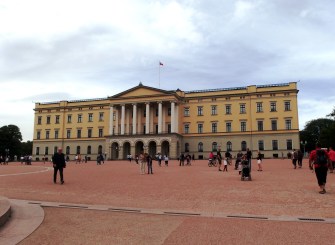 The Royal Palace in Oslo. “The Royal Myth was created by King Olav in 1973, when he arranged a photo of himself pretending to pay for a tram ticket,” says Moestue.
Credit: Palickap, CC BY-SA 4.0

“The Royal Myth was created by King Olav in 1973, when he arranged a photo of himself pretending to pay for a tram ticket. That iconic image showed the king being just like us. But of course, it was such a big deal because he’s not one of us. This is very cleverly constructed doublethink.”

“In 2011, these people voted to bomb Libya. 588 Norwegian bombs helped reduce that country from one of the most stable states in Africa into one of civil war with extreme suffering for its people.”

“Our national hero Tordenskiold operated as a slave-trader during the colonial era. Norway actively downplays this part of our history and has not provided any apologies or paid any reparations.”

“Amnesty International has complained that this prison in Oslo keeps prisoners in isolation for up to 23 hours a day. This equals torture and may have long-term implications for the prisoners’ mental health.”

“This bench is a memorial for all in Norway who have been discriminated against—and still are—because of their sexual orientation. Still today you can find discrimination, and some religious sects are still trying to ‘heal’ young people from homosexuality.”

“Many efforts have been made to assimilate the indigenous people of Norway. Sami and Kven have had their cultures diminished. Use of their languages and symbols was discouraged, sometimes outlawed. Today, these languages are under threat of extinction.” 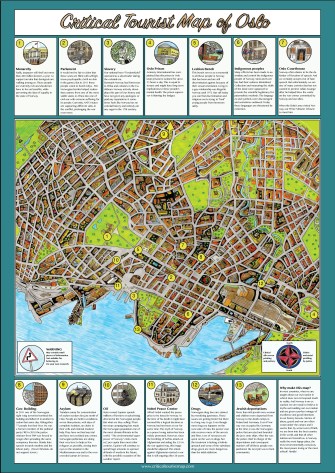 “In most countries, what we are taught about our own nation in school does not correspond much to reality,” says Moestue. This map sets about correcting that shortcoming, at least for Oslo and Norway.Credit: Markus Moestue. Click here to zoom.

“Norway often claims to defend freedom of speech. But unfortunately, we are one of many countries that has not wanted to protect Julian Assange. When the Dalai Lama visited Norway, our prime minister refused to meet with him.”

“In 2011, a Norwegian right-wing terrorist bombed this building, and killed 69 people in another location that same day. Altogether, 77 people lost their lives. He was a former member of the political party FrP. In 2018, the justice minister from FrP was forced to resign after spreading the same conspiracy theories as the terrorist had—mainly hate speech towards Muslims and the Labor Party.”

“Asylum seekers in Trandum camp, north of Oslo, are held in conditions worse than in prison, including days of complete isolation, no chairs and minimal medical assistance. They have not had any trial and have not committed any crimes.”

“State-owned energy company Equinor spends millions on advertising aimed directly at the Norwegians. Their non-stop campaigning has made the Norwegian population one of the most climate-illiterate in the world.”

“The myth of Norway as a peace-loving nation has been widely promoted. However, since Norway’s contribution to the bombing of Serbia, the attack on Afghanistan and the U.S. war against Iraq, this image should be adjusted.”

“Even though most drug use takes place on Oslo’s West Side, the poorer East Side suffers more arrests and fines. Lots of resources are spent on the war on drugs, but the policy is lacking a holistic approach.”

“During WWII, more than 600 Jews were deported from Norway to the Nazi death camps. The Norwegian police arrested the Jews and put them onto ships. After the war, the police chief in charge was pardoned. His next job was to hunt communists.”

“In most countries, what we are taught about our own nation in school does not correspond much to reality,” says Moestue. This map sets about correcting that shortcoming, at least for his own country. “Is Norway the most happy place, the most environmentally conscious, the most peace-loving or the most ethical [country on Earth]? Hardly!” 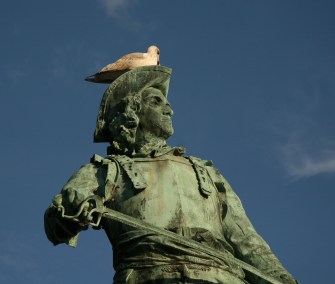 Seagull resting in Tordenskiold’s hat. “It sometimes feels like Norway has no colonial history and nobody ate any sugar in the 17th century.”
Credit: Michal Klajban, CC BY-SA 3.0

Perhaps somewhat too convinced of the malleability of public opinion, Mr Moestue muses: “People don’t want to just come to Oslo, look around, go back home and say: Hey, I’ve been to Oslo, to have the best kebab or to have some mediocre Chinese food there. No. People want to go to Oslo and then they want to go back home, and they want to say: I’ve been to Oslo. I’ve seen Oslo. And it’s really, really bad.”

Most foreigners – and a good deal of Norwegians – will probably not know that the country has a colonial past, for example. “We had fortresses in Africa and colonies in the Caribbean. Norway actively downplays this part of our history and has not provided any apologies or paid any reparations,” says Moestue. But “it sometimes feels like Norway has no colonial history and nobody ate any sugar in the 17th century.”

However, don’t mistake Mr Moestue’s negativism for nihilism. Ultimately, his map has a positive point to make: “I feel that Norway is using too much resources appearing to be good, and too little effort actually doing good!”

And there’s another thing the artist hopes is map will achieve: “I’m hoping others will make their own tourist maps about their own cities. If they look hard enough I’m sure it’s also pretty bad!”

Learn more about Mr Moestue’s map on his website.

Got a strange map? Let me know via strangemaps@gmail.com.

Successful forgers are remembered as great conmen, not artists. This is strange, considering their forgeries fooled even the most seasoned critics.
Up Next
Health

The researchers say their findings support the idea that low biodiversity in modern living environments could lead to “uneducated” immune systems.