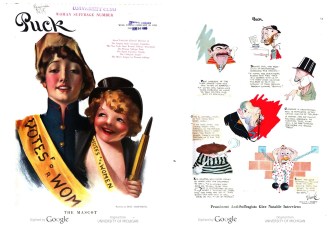 It Is the season of electoral maps, but this one is unlike most others you will see today. Called The Awakening, it recalls an electoral revolution sweeping the nation a century ago – women’s suffrage.

On the left, we see a torch-bearing, toga-wearing woman, her cape emblazoned with the slogan Votes for Women.

Clearly an ambulant version of the Statue of Liberty standing guard over New York Harbor, she’s carrying the flame of freedom from the enlightened West to the still-dark East.

Here, women are as yet unenfranchised, and yearningly stretch out their arms and necks towards Lady Liberty, bestriding the other half of the country. Below the image is printed a poem by feminist and suffragist Alice Duer Miller (1).

Created by Henry Mayer, this map was published as a centerfold in the issue of Puck Magazine for the week ending on 20 February 1915, a special ‘Suffrage Number’, guest-edited by the New York State Women Suffrage Association, the Equal Franchise Society, the Men’s League for Woman Suffrage and other local suffrage groups. 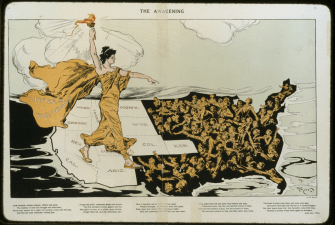 In its editorial, the magazine vowed not to lose sight of the issue: “We shall have something to say about the cause next week, and the week after, and so on, until certain short-sighted gentlemen now enjoying a brief sojourn in Washington awaken to their plain duty (…) From now on until the battle for woman suffrage is won, Puck will have some very pointed things to say about the matter.”

The female figure on this map not only references Lady Liberty, but is also a clear reference to the famous 1872 painting American Progress, showing a giant woman guiding settlers on their westward trek to fulfil Manifest Destiny. What will have struck everyone familiar with that image as significant, is the reversal of direction: progress now comes from the West and is heading East.

In 1869, women in Wyoming Territory obtained the right to vote and stand for office – a first in the United States (and the world). By the end of 1914, more than four million women in 11 states, all in the West, had voting rights equal to men. Millions of women in the East were still waiting for the same freedom. 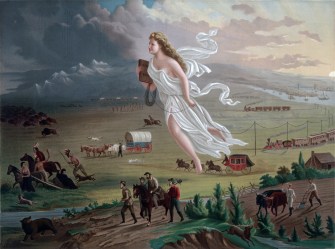 Popular depiction of settlers going West, protected by ‘Columbia’ (the symbolic representation of America), fulfilling the Manifest Destiny of the United States.Image: ‘American Progress’ (1872), painting by John Gast. In the public domain.

Up until the first two decades of the 20th century, it was individual states that granted women the right to vote in different types of elections. Some gave women full suffrage, but others required that women owned property, or only granted women voting rights in local elections.

Things changed dramatically in 1920, when Congress passed the 19th Amendment. This prohibited both the states and the federal government to restrict voting rights on the basis of sex – enfranchising 26 million women.

As may be observed, the faces of the ladies yearning for the vote are all white. This despite considerable contributions by African-American women to the suffrage movement. Said black suffragist Adella H. Logan: “If white American women, with all their natural and acquired advantages, need the ballot, how much more do black Americans, male and female, need the strong defense of a vote to help secure their rights to life, liberty and the pursuit of happiness?”

The 19th Amendment failed to fully enfranchise colored women. Although legally entitled to vote, African-American women were denied the vote in practice in numerous Southern states until 1965.

The memory of hate and struggle and bitterness;

Bonds may endure for a night, but freedom comes with the day,

And the free must remember nothing less.

Forget the strife; remember those who strove –

Who gave us hope, as a mother gives us love,

Forget them not, and this remember, too:

How at the later call to come forth and unite,

Each one answering the call of her own wise heart.

They came from toil and want, from leisure and ease,

Those who knew only life, and learned women of fame,

No one knew whence or how, but they came, they came.

And some were pale with the terror of unreal dangers;

But their hearts knew this: that hereafter come what may,

Women to women would never again be strangers.

Discovered in 1900, the Saint-Bélec slab languished unrecognized in a castle basement for over a century.
Up Next
Health

It’s a precautionary measure stemming from fears that mutated coronavirus strains may reduce the efficacy of future vaccines.