Socialist candidates are cropping up all over the country. In Texas, they are being elected to judgeships. Two of them serve in Congress, and another one works in the Senate. Chicago has a Socialist alderman and the city council of Sommerville, Massachusetts is controlled by an alliance of left-wing members.

While it may seem like reds are all around us, this isn’t anything new or even all that impressive. After all, there was a time when a Socialist got 6% of the vote for president, and more than 1000 of his comrades held elected office all over the country.

About 100 years ago, Socialist candidates were doing rather well all over the United States. None were more visible than Eugene Debs, the perennial candidate and labor organizer.

Debs helped to found the American Railway Union and the Industrial Workers of the World. He saw unionization as every bit as important, if not more important, than political work in improving the lives of the working class. His excellent speaking ability and national fame after leading the Pullman Strike made him a natural choice for a presidential candidate. He ended up running five times.

In the 1912 election he got nearly a million votes, which was roughly 6% of all votes cast. This was more than double what he got just four years before and prompted some to foresee a Socialist president in a mere eight years. They would have to settle with about the same number of votes in 1920, though this represented only 3.4% of the vote in that election.

While he ran for president repeatedly and once for Congress, he was only ever elected to be a clerk in Terre Haute and once served in the Indiana General Assembly. Despite this, he has remained an icon of the American left. Bernie Sanders kept a portrait of him in his Burlington office when he was mayor.

Deb’s vice presidential candidate in 1912, Emil Seidel, was the mayor of Milwaukee, Wisconsin, which also had a majority of Socialists on the city council and county board. A conservative “sewer” Socialist, his administration focused on an active and effective government rather than the overthrow of capitalism. His administration created a public works department, the city park system, and closed down many casinos and brothels. He hired a young Carl Sandburg to be his secretary.

Milwaukee would have two more Socialist mayors governing for a combined 38 of the first 60 years of the 20th century. It remains the only major American city to elect a socialist to its highest office. That was just one elected official though; in 1912, more than 1000 Socialists were elected to offices all over the country, including aldermanic, mayoral, legislative, and administrative offices.

This would be the high-water mark for the Socialist Party, however. Later attempts to reach the heights of the 1910s fell short. An attempt to create a coalition party with progressives and populists did well in 1924 and then collapsed. Norman Thomas worked as hard as he could to nab just 2.2 percent of the vote for president in 1932. When Upton Sinclair, the author of The Jungle, ran for Governor of California in 1934 he ran on a socialist platform called End Poverty In California but ran as a Democrat because of how toxic the word “socialist” had become.

Capitalism Is in Trouble. Socialist Principles Can Save It.

Was there something in the water? How could there be so many of them?

A great deal of the success of the Socialists at the dawn of the 20th century can be attributed to the spirit of the age. The Progressive Era was filled with reform movements that called for changes to society and institutions in the name of progress. Many reforms that shaped modern America were implemented during this time. The spirit of reform reached every level of governance and had a significant impact on one presidential election in particular.

In the 1912 election there were four noteworthy candidates: the Democratic candidate Woodrow Wilson, Republican president William Howard Taft, progressive candidate Teddy Roosevelt, and the Socialist candidate Eugene Debs. Wilson and Roosevelt ran on progressive platforms and took 68% of the popular vote between them. If Deb’s total is added to that, a full 74% of the voters were behind progressivism and socialism that year. President Taft, running as the conservative option, won a mere two states and got 23% of the vote, earning him third place.

Roosevelt’s performance was extraordinary and telling. Running with a newly created party – the Progressive Party or Bull Moose Party – after he was denied the Republican nomination, he won 25% of the popular vote and came in second in the electoral college. This remains the best performance by any third-party candidate to this day. However, his entry into the race split the Republican vote and likely gave the election to Wilson.

While a great deal of Roosevelt’s success must be attributed to his personal popularity, the similar success of Wilson and Debs suggest that progressivism and a desire for serious reform took the day. 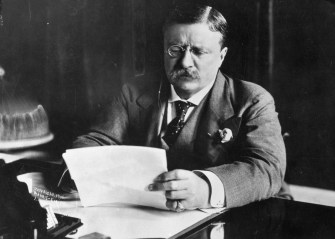 President Theodore Roosevelt working in 1905. His 1912 campaign centered around a bold, progressive platform called the New Nationalism. While his defeat prevented its implementation, its core ideas would later be implemented by his cousin FDR during the New Deal.

Nowhere was this desire for reform more evident than on the platforms of the Socialist and Progressive parties. While they differed in their fundamental philosophies, major themes of the progressive era reforms can be seen in their platforms.

Consider the similarities between these points of the Socialist platform:

And these points on the Progressive platform:

Several, similar points could be found on the New Freedom platform that Woodrow Wilson took to the White House and implemented.

Of course, progressivism and socialism aren’t identical, and there is much they disagreed on. For instance, Roosevelt would have merely regulated large corporations while Debs would have nationalized them. Both platforms still manage to reflect a dedication to improving the condition of everyone, making institutions work better, and a sincere belief in the ability of reform to improve life – all hallmarks of progressive era reform.

The recent spike in interest around socialism and the increasing number of socialist office holders is nothing new, and it might be more surprising if we didn’t see it today. Whether this interest is driven by an ideological shift towards public ownership of the means of production or a more general desire for progressive reform of any kind remains to be seen.

Until then, we should be in for a few exciting years of American politics.

These Are The 10 Largest Non-Planets In Our Solar System

Only 8 worlds make the astronomical cut as planets. Here are the 10 fascinating bodies that didn’t make it.Astronomically, bodies within the Solar System must achieve three criteria in order to […]