Scientists at NASA are working on a bit of alchemy that would greatly improve the chances of a mission headed there of actually returning. Otherwise, we’d have one of those desperately sad situations like in old science fiction movies where astronauts are simply stuck on the planet with no way to return.

The problem is this: Hauling fuel to Mars so that the return flight back to Earth actually succeeds is not just inefficient, but it would also take up a ton of precious cargo space. In order to solve this dilemma, NASA is currently working on utilizing solutions that are already on the planet itself.

One possible idea is to turn water from Martian soil, known as “regolith” (as is any topsoil and rock layer on any planetary body) into its components, hydrogen and oxygen. Then, once that is accomplished, combine carbon from Mars’ atmosphere with hydrogen, creating… methane!

Methane from under the ice is ignited. On Earth, anyway. Image from Imgur, based on a video by Rune Patterson

The robot that will do this, known as RASSOR (Regolith Advanced Surface Systems Operations Robot), is shown below in testing, and it illustrates how the surface material will be converted for use both as rocket fuel and as energy for inhabitants of a colony on such a planet. The idea is to send the robots to the planet long before humans arrive so that the methane would be stored up and ready to use. 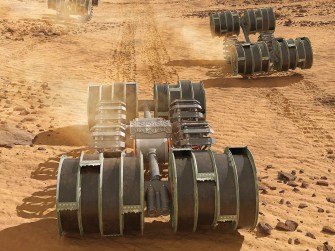 The Martians: This artist’s rendering shows excavating robots that may one day operate on Mars, long before humans ever set foot on the planet. Image source: Marek Denko/NoEmotion

“This technology will one day allow humans to live and work on Mars,” said NASA Team Lead Kurt Leucht, “and return to Earth to tell the story.”

Albert Einstein played a mean violin.
Up Next
Hard Science

A young star and a belt of gasses give the game away.