In November 2015, The New York Times and Google teamed up to give away a million Google Cardboard headsets. Virtual reality, once relegated to cheesy science fiction and overpromising carnival attractions, had become so commonplace The New York Times could give it away to promote an app. All it cost parents was the time and energy to fold the device.

Of course, the do-it-yourself Google Cardboard hardly has the corner on the market, and more immersive experiences are available for any family budget, from the cost-efficient Oculus Go to the high-end HTC Vive. As the market continues to flood with newer, more powerful VR tech, children’s desire for it will only grow.

But in the rush to market, little research has been conducted on how virtual reality affects the health of children. While companies do provide age recommendations, the lack of consensus suggests these numbers are arbitrary, more legal safeguarding than a campaign for social awareness.

So, is virtual reality dangerous for children? Unfortunately, there are few definitive answers. (Hardly reassuring news for the grisly imaginations of parents.)

Here’s what we do know… 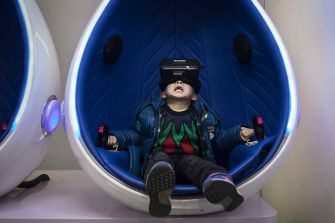 The first and most obvious danger is that VR headsets blind users to their surroundings. A quick glance at any VR safety manual will provide plenty of warnings for users to always stay seated and stay clear of people, objects, stairs, furniture, windows, and pets. Imagine the damage a sensory-deprived 13-year-old can do to himself, his parents’ living room, and poor Whiskers, and it quickly becomes clear why this is the best-documented danger of virtual reality.

Another well-documented ailment of virtual reality is cybersickness. When playing in VR, a user’s visual and auditory senses tell their brain they’re moving, while their inner ear argues the contrary. This bodily disagreement causes a type of motion sickness that can induce nausea, vomiting, headaches, and difficulty balancing. While anyone can suffer from cybersickness, younger children may be particularly at risk as they can lack the self-awareness to recognize the symptoms, leading them to continue playing even as their stomachs beg them to stop.

These are certainly not pleasant side effects, but each is easily allayed by parental supervision and short play sessions, and neither is dangerous in the long term. Where researchers are more concerned is how virtual reality may affect children’s visual development.

Visual effects (not the good kind)

Speaking with CNN, Professor Martin Banks, an optometrist at the University of California, Berkeley, says there’s good evidence that doing near work on tablets, phones, and other screens increases the risk of nearsightedness. He worries “virtual reality might make things worse.”

Similarly, Mark Mon-Williams, a professor of cognitive psychology at the University of Leeds, notes that virtual reality strains our eyes by forcing them to focus on one location (a two-dimensional screen) while also trying to align as if looking at a far away object (the perceived 3D effect). He affirms that the short-term effects can be headaches, sore eyes, and difficulty concentrating on a visual task, but that the long-term consequences are unknown.

However, in a 2017 statement, the American Academy of Ophthalmology argued that “there is no reason to be concerned that VR headsets will damage eye development, health or function.” The organization also contends that while age limitations may make sense for content, the technology poses no known threat to eyes.

The statement echoed the common refrain that there are currently no long-term studies available. 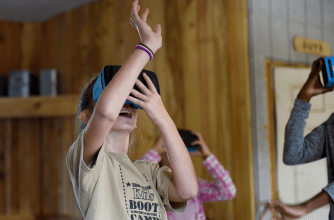 Like television and video games before, virtual reality has become a major concern for parents wanting to know how it will affect their children’s mental development. But television andvideo games have been mainstream for decades, giving scientists time to conduct the studies necessary to measure their effects.

Jeremy Bailenson and Jakki Bailey, at Stanford University’s Virtual Human Interaction Lab, surveyed the current research and found that “little is known about the effects of IVR [immersive virtual reality] as a technology on child development.” They also note that children at different ages will likely respond to VR differently, as their neural circuits are developing at different stages.

One study found that children report a higher sense of presence and “realness” in virtual environments when compared with adults. In another study, children who were told they once swam with whales were more likely to create a false memory of the event if they watched a virtual reality movie showing their virtual avatar swimming with whales.

These studies have disturbing implications, but it should be pointed out that human minds are faulty hard drives, and false memories can be created from many media sources, such asthe news and Facebook.

And while parents’ minds tend toward the darker possibilities, there are studies showing that virtual reality’s immersive capabilities can be a net positive for children. A study published in the Journal of Pediatric Psychology showed that it can reduce anxiety and be used in pain management for children undergoing painful medical procedures. Other studies have shown that it can be a useful tool to help teach childrenon the autism spectrum.

Let’s return to the question at hand: Is virtual reality dangerous for children? And the answer depends on what you mean by “danger.”

Placing screens inches from a child’s eyes can have adverse effects, but there’s no consensus whether long-term damage is worse than other screened devices. And while virtual reality experiences will certainly affect children, all media is designed to affect people on emotional or intellectual levels. As of right now, researchers have yet to definitively show that VR has any greater negative impact on child development than literature, television, or video games.

Given a current survey of the research landscape, worried parents would be best advised to follow safety guidelines and best practices for other media. Limit the amount of time a child spends with virtual reality. Ensure they have interests unrelated to a screen. Spend time enjoying the technology and discussing it with them. Be sure to provide enriching, beneficial, and age-appropriate experiences for their virtual excursions.

For younger children, be sure to limit their VR time to a handful of minutes a day. Regardless of the long-term effects, your day will go much smoother if you don’t have a motion-sick, eye-fatigued eight-year-old to deal with.

This self-assembling 3D battery could charge your phone in seconds

A team of researchers at Cornell University has developed a revolutionary battery architecture that could someday increase storage capacity while cutting charge times to mere seconds.