Paul is a writer, filmmaker, and educator. He has written for years for Big Think and other outlets on transformative scientific research, history, and current events. His award-winning films like[…]
Go to Profile
The Future

This Elon Musk interview from 1999 explains his success

When he first became a multi-millionaire, Elon Musk shared how his vision led to success.
▸
with
Paul Ratner

How did Elon Musk, the billionaire entrepreneur behind such game-changing tech ventures as SpaceX, Tesla Motors, The Boring Company, and Neuralink, achieve so much? A telling 1999 interview, taken when he recently became a multi-millionaire, provides a fascinating insight into his thinking and motivation.

The interview starts with Musk waiting to get the new million-dollar McLaren F1 that he just bought, as his then-fiancé Justine Wilson excitedly waits by his side.

Musk explains that the path to his success lies in how he perceived back in 1995 that there’s money to be made online despite the fact that “most people thought the Internet was gonna be a fad.” But the South African entrepreneur saw the future differently, selling his first computer program at the age of 12.

While younger, the 1999 Musk has noticeably less hair, as he shares that even having business foresight, his success didn’t come overnight. It was just 3 years ago that he was sleeping on the floor and showering at the YMCA. Reflecting on his life’s trajectory, now that he has significantly more “creature comforts,” he coyly refers to it as “moments in my life”.

Indeed, these “moments” included selling his online publishing company Zip2 a year earlier for $400 million. “That’s just a large number of Ben Franklins,” he points out. 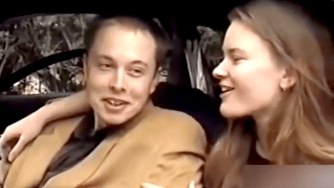 “I can buy one of the islands in Bahamas and turn it into my personal fiefdom. I’m much more interested in trying to build and create a new company,” says Musk.

As Musk and his fiancé celebrate the arrival of the McClaren, which Wilson calls “the perfect car for Silicon Valley,” he explains his next endeavor – nothing less than the transformation of the banking industry. While he admits he doesn’t fit the “traditional picture of a banker,” he says he has little trouble raising $50 million dollars. This is in relation to a new online banking and mutual funds company he started called X.com, which would later become Paypal.

He is not shy about his vision for X.com, believing it could become a “multi-billion dollar bonanza”. Why? Because it is pursuing “the biggest sector of the world’s economy.” And he believes in this idea so much, he put most of his money into it. He calls it “the new game”.

Musk also claims that a “sense of satisfaction of having created the company that I sold” is another driving factor for him. And the amazing new “car sure is fun.”

As for other future goals, 1999 Elon Musk was hoping to get on the cover of Rolling Stone – an objective he also eventually achieved.

Transporation will and should go electric. But the effects of gasoline on the environment, and the wars fought over oil, constitute a market externality that is unpriced. Because the market doest price that externality, the market won’t address it. Here Musk explains why producing and consuming electricity sustainably has become such an important part of his life.

Elon Musk says that transporation will and should go electric. But the effects of gasoline on the environment, and the wars fought over oil, don’t factor into the price of gasoline at the pump. Because the market doest price externalities like environmental damage and war, the market won’t innovate to solve those issues. Here Musk explains why producing and consuming electricity sustainably has become such an important part of his life.

Technology doesn’t win wars. Why the US pretends it does.