A Paris architectural firm has submitted a proposal to rebuild Notre Dame with a stunning glass design, an urban farm, and a roof that generates electricity.

“How can we write the contemporary history of our country, but also that of science, art, and spirituality together?” the firm said in a press release. “We seek to present a transcendent project, a symbol of a resilient and ecological future.” 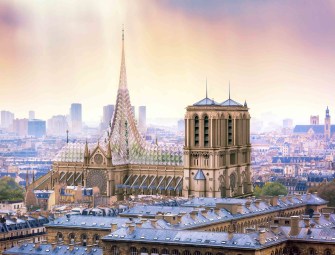 Under the firm’s proposal — dubbed “Palingenesis,” a Greek word for of rebirth or recreation — the new roof would be constructed out of glass, oak, and carbon fiber. The roof would house an urban farm that could produce an annual yield of up to 21 tons of fruits and vegetables. The glass on the roof would contain an “organic active layer” that will convert solar energy into electricity that’d be stored in hydrogen cells, from which it could be distributed throughout the cathedral. 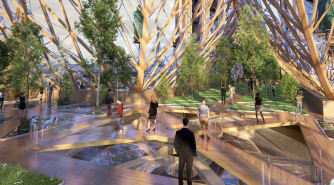 The proposal also calls for natural light to pass through the roof and shine down on the choir. 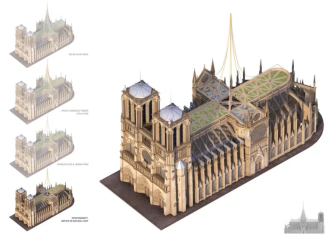 “In conclusion, we advocate for an exemplary project in ecological engineering that feels true to its time and avoids a pastiche architecture that turns the city into an open-air museum,” the firm wrote. “Circular economy, renewable energies, inclusive social innovation, urban agriculture, protection of biodiversity, without forgetting beauty and spiritual elevation: our reconstruction project feeds on such values to deliver a deep, conscious meaning.”

As for purists’ concerns about bringing such a modern update to the 850-year-old cathedral? The firm suggests the structure already has a long history of mixed architectural styles.

“From primitive Gothic in the 12th century to its restoration by Viollet-le Duc in the 19th century, through the radiant Gothic of the 13th century and the flamboyant Gothic of the 14th century, Notre-Dame cathedral undoubtedly arises from centuries of work and multi-faceted inspiration. As such, it is hardy encumbered by useless musings about the overlapping styles inherent in the building.”

The moon is shrinking — also, moonquakes are a thing