A Florida student figured out a way to more accurately measure the size of one of the largest fish that ever lived – the extinct megalodon shark – and found that it was even larger than previously estimated.

The megalodon (officially named Otodus megalodon, which means “Big Tooth”) lived between 3.6 and 23 million years ago and was thought to be about 34 feet long on average, reaching the maximum length of 60 feet. Now a new study puts that number at up to 65 feet (20 meters).

Homework assignment leads to a discovery

The study, published in Palaeontologia Electronica, used new equations extrapolated from the width of megalodon’s teeth to make the improved estimates. The paper’s lead author, Victor Perez, developed the revised methodology while he was a doctoral student at the Florida Museum of Natural History. He got the idea while teaching students, noticing a range of discrepancies in the results they were getting.

Students were supposed to calculate the size of megalodon based on the ancient fish’s similarities to the modern great white shark. They utilized the commonly accepted method of linking the height of a shark’s tooth to its total body length. As the press release from the Florida Museum of Natural History expounds, this method involves locating the anatomical position of a tooth in the shark’s jaw, measuring the tooth “from the tip of the crown to the line where root and crown meet,” and using that number in an appropriate equation.

But while carrying out calculations in this way, some of Perez’s students thought the shark would have been just 40 feet long, while others were calculating 148 feet. Teeth located toward the back of the mouth were yielding the largest estimates.

“I was going around, checking, like, did you use the wrong equation? Did you forget to convert your units?” said Perez, currently the assistant curator of paleontology at the Calvert Marine Museum in Maryland. “But it very quickly became clear that it was not the students that had made the error. It was simply that the equations were not as accurate as we had predicted.”

Found in North Carolina, these 46 fossils are the most complete set of megalodon teeth ever excavated.Credit: Jeff Gage/Florida Museum

Perez’s math exercise demonstrated that the equations in use since 2002 were generating different size estimates for the same shark based on which tooth was being measured. Because megalodon teeth are most often found as standalone fossils, Perez focused on a nearly complete set of teeth donated by a fossil collector to design a new approach.

Perez also had help from Teddy Badaut, an avocational paleontologist in France, who suggested using tooth width instead of height, which would be proportional to the length of its body. Another collaborator on the revised method was Ronny Maik Leder, then a postdoctoral researcher at the Florida Museum, who aided in the development of the new set of equations.

The research team analyzed the widths of fossil teeth that came from 11 individual sharks of five species, which included megalodon and modern great white sharks, and created a model that connects how wide a tooth was to the size of the jaw for each species.

“I was quite surprised that indeed no one had thought of this before,” shared Leder, who is now director of the Natural History Museum in Leipzig, Germany. “The simple beauty of this method must have been too obvious to be seen. Our model was much more stable than previous approaches. This collaboration was a wonderful example of why working with amateur and hobby paleontologists is so important.”

In general, almost nothing of the super-shark survived to this day, other than a few vertebrae and a large number of big teeth. The megalodon’s skeleton was made of lightweight cartilage that decomposed after death. But teeth, with enamel that preserves very well, are “probably the most structurally stable thing in living organisms,” Perez said. Considering that megalodons lost thousands of teeth during a lifetime, these are the best resources we have in trying to figure out information about these long-gone giants.

Researchers suggest megalodon’s large jaws were very thick, made for grabbing prey and breaking its bones, exerting a bite force of up to 108,500 to 182,200 newtons. 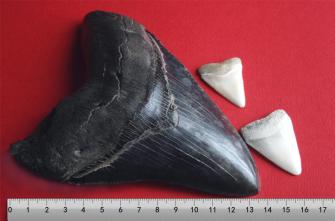 Limitations of the new model

While the new model is better than previous methods, it’s still far from perfect in precisely figuring out the sizes of animals which lived so long ago and left behind few if any full remains. Because individual sharks come in a variety of sizes, Perez warned that even their new estimates have an error range of about 10 feet when it comes to the largest animals.

Other ambiguities may affect the results, such as the width of the megalodon’s jaw and the size of the gaps between its teeth, neither of which are accurately known. “There’s still more that could be done, but that would probably require finding a complete skeleton at this point,” Perez pointed out.

How did the megalodon go extinct?

Environmental changes that led to fluctuations in sea levels and disturbed ecosystems in the oceans likely led to the demise of these enormous ancient sharks. They were just too big to be sustained by diminishing food resources, says the ReefQuest Centre for Shark Research.

A 2018 study suggested that a supernova 2.6 million years ago hit Earth’s atmosphere with so much cosmic energy that it resulted in climate change. The cosmic rays that included particles called muons might have caused a mass extinction of giant ocean animals (“the megafauna”) that included the megalodon by causing mutations and cancer.

Scientists, led by Adrian Melott, professor emeritus of physics and astronomy at the University of Kansas, estimated that “the cancer rate would go up about 50 percent for something the size of a human — and the bigger you are, the worse it is. For an elephant or a whale, the radiation dose goes way up,” as he explained in a press release.

Since our arrival, humans have driven a seven-fold drop in the mass of wild land mammals.
Up Next
Thinking

The power of authority: how easily we do what we’re told

Milgram’s experiment is rightly famous, but does it show what we think it does?