In the popular imagination, the story of Easter Island has long centered on stone. About 900 monolithic statues, or “moai”, have been identified on Easter Island, a remote 63-square-mile triangle in the Pacific Ocean whose native name is Rapa Nui. The statues — haunting, hollow-eyed faces — were crafted from massive blocks of volcanic rock by the Rapa Nui people, who settled on the island around 1200 CE.

But for archaeologists and anthropologists, the story of Rapa Nui has often centered on trees, rats, and climate. These are the key factors, some researchers have proposed, that led to ecological catastrophe on the island and, consequently, population collapse.

One popular narrative holds that the growing Rapa Nui population cut down so many of the island’s tall palm trees that they depleted their food and logistical resources and inadvertently killed off plant and animal species. Meanwhile, Polynesian rats, which were carried to the island via boat and had multiplied exponentially over generations, contributed to deforestation by eating seeds and plants. Compounding the island’s problems were changes in the El Niño Southern Oscillation, which led to drier conditions.

Facing dire circumstances, the natives probably resorted to eating rats. They might have also turned to eating each other, suggested the author Jared Diamond in his book Collapse, in which he states that Rapa Nui is the “clearest example of a society that destroyed itself by overexploiting its own resources.”

But the popular narrative about Easter Island could be mostly false.

New research suggests that these narratives connecting environmental devastation to population decline aren’t accurate. The study, published in Nature Communications, found that while the Rapa Nui people did suffer environmental and climatic changes, they didn’t suddenly dwindle in number but rather maintained “stable and sustainable communities on the island” up until the point they encountered Europeans.

To estimate changes in population over time, the researchers tested four demographic models, three of which accounted for variables like climate change or deforestation or both. Their models also incorporated about 200 radiocarbon-dated archaeological samples, which serve as a good “proxy for estimating relative population sizes.” 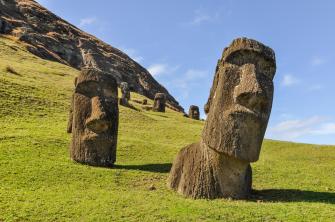 “[Approximate Bayesian Computation] is a flexible and powerful modeling approach originally developed in population genetics, but recently applied in archeology, including paleodemographic research. We demonstrate how ABC can be used to directly integrate independent paleoenvironmental variables into demographic models and perform multi-model comparisons.”

The results produced by all four models showed that the Rapa Nui population enjoyed steady growth until the first contact with Europeans in 1722, after which the population seemed to either plateau or decline over subsequent decades. These models suggest that, contrary to previous hypotheses about how the overexploitation of resources led to demographic collapse, deforestation and climatic changes on the island were prolonged processes that didn’t have catastrophic effects on the population.

For example, evidence suggests that the Rapa Nui people built productive gardens on deforested land and mulched them with nutrient-rich stone. As for climate change, the researchers pointed to recent studies suggesting that the natives adapted to drier conditions by turning to coastal groundwater sources.

Although the study offers evidence of a robust population prior to European contact, the researchers could not determine which of the four demographic models was most correct, nor did they account for other factors that likely affected the island’s population, like warfare. The researchers also did not explore what effect, if any, European contact had on the population.

But overall, the study casts serious doubts on the popular narrative that environmental changes drove down the native population. To be sure, there are dark chapters in the history of Rapa Nui, including civil war, slave raids, and statue destruction; reports suggest that between 1722 and 1774 many of the island’s statues were toppled or neglected, likely due to internal conflicts among the natives.

Still, the study suggests that the story of early Rapa Nui is less about environmental destruction than it is about resilience.

The researchers conclude that “despite extreme isolation, marginal ecological conditions, and a series of environmental changes, Rapa Nui people found solutions that enabled them to successfully thrive on the island for at least 500 years prior to the arrival of Europeans.”

Tags
Anthropologyarchaeologyclimate changecultureenvironmenthistoryresourcessociety
In this article
Anthropologyarchaeologyclimate changecultureenvironmenthistoryresourcessociety
Related
The Past
The hobbies of 5 great geniuses
Albert Einstein played a mean violin.
The Future
A zoologist explains why the project to resurrect the wooly mammoth should go extinct
De-extinction, if it is ever possible, will not be simple.
Strange Maps
The world map of the future might be vertical
A vertical map might better represent a world dominated by China and determined by shipping routes across the iceless Arctic.
High Culture
Attacking a priceless work of art doesn’t make you an iconoclast
Climate activists’ brand of iconoclasm is far removed from the Beeldenstorm that swept medieval Europe.
The Past
Earth’s magnetic field supports biblical stories of destruction of ancient cities
When battles raged in ancient cities, their rocks blazed so brightly that they could be reoriented according to Earth’s magnetic field.
Up Next
Hard Science
New research finds that reforesting Europe would increase rainfall, fighting a drying trend
Trees store carbon dioxide, have a cooling effect in cities, and reduce flood risks.