One of the tricks you learn hunting dinosaurs in Canada is to look for orange.

Dinosaur bones are dull browns, tans, and greys. But in the middle of the drab sandstones of the badlands – a dry landscape where wind and water have worn away much of the rock – you’ll sometimes catch a flash of fluorescent orange. Walk over and you may well find a dinosaur bone weathering out.

The orange is lichen, growing on the bone. The bone gives the lichen a stable foothold in the eroding landscape, it’s porous, storing moisture during droughts, and full of minerals like phosphate, vital to a growing lichen. It’s strange to think that something that died 76m years ago plays a role in modern ecosystems, but life is opportunistic. 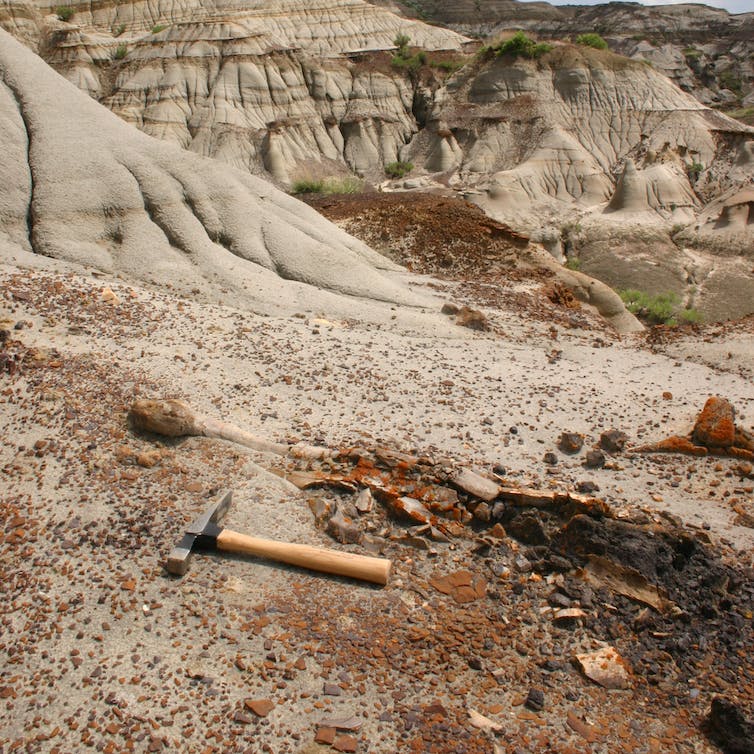 If it does, that creates problems for identifying the original biological material of fossils. That’s where our new research – led by my colleague Evan Saitta of the Field Museum in Chicago – comes in, providing a detailed look at the organic matter found inside dinosaur bones.

It’s clear that the popular concept of fossilisation, where the bone is completely mineralised and replaced with new material, is wrong. Most of the original bone mineral – calcium phosphate – survives. It’s the same stuff that was inside a living, breathing dinosaur millions of years ago.

Remarkably, organic molecules can sometimes persist. Ancient DNA has let us reconstruct genomes of recently extinct species and discover previously unknown species such as our cousins the Denisovans. Ancient proteins have shown the evolutionary history of the extinct mammal Toxodon, and fossil pigments let us put stripes on dinosaurs and speckles on their eggs. 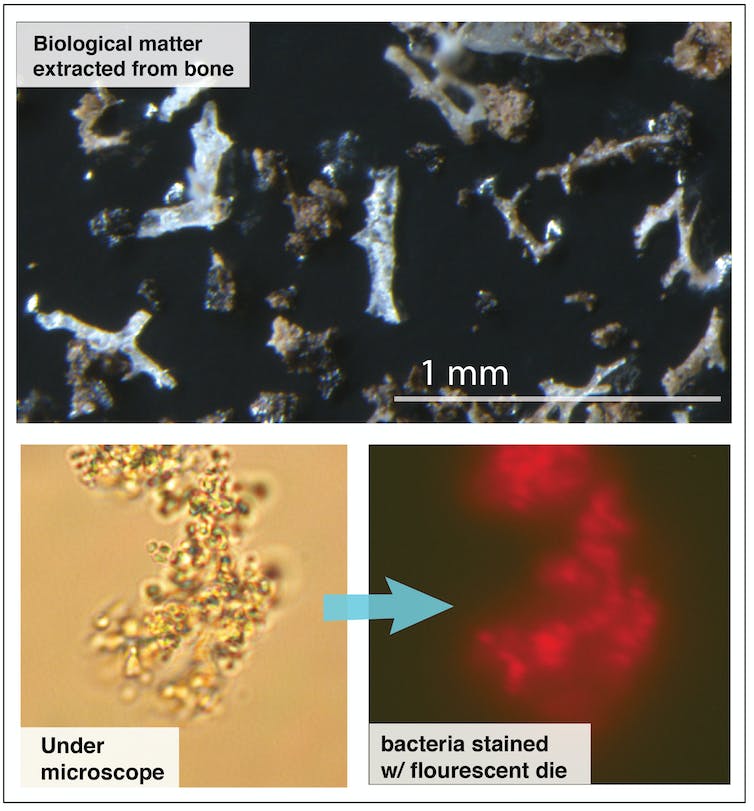 Even more remarkable claims have been announced, including DNA, proteins and even cells and blood vessels from dinosaur bone. But these are more than an order of magnitude older than the oldest confirmed DNA and proteins, so they’ve been disputed. The idea of recovering dinosaur tissues and using dinosaur DNA and proteins to reconstruct evolution is tantalising. But it’s unclear how, or if, they can survive tens of millions of years.

Half the DNA in a fossil disappears roughly every 500 years and DNA should become unreadable in 1.5m years. Proteins are more resilient. The oldest date to 4m years ago, but the peptide bonds holding a protein’s amino acids together also degrade over time, so it’s unclear if they could survive in 75m year old dinosaur fossils.

Meanwhile, living things – bacteria, protists, fungi, plant roots and nematodes – thrive underground. To be sure we have dinosaur tissues, we first need to exclude other, less exciting possibilities, like contamination by bacterial biofilms.

To understand the source of the biological matter inside dinosaur bones, we launched a unique field expedition, not for dinosaurs, but for microbes inside them. We excavated a Centrosaurus bonebed in Dinosaur Provincial Park, Alberta. Sterilizing tools with bleach, alcohol, and a blowtorch, we then wrapped fossils in foil to prevent contamination. But they were still full of life, coming from inside the bone.

Amino acids extracted from the fossils showed the unmistakable signature of life. Amino acids exist in left- and right-handed configurations. Living things make left-handed amino acids, but after death, their structure slowly flips back and forth, creating a mix of left- and right-handed molecules. Ancient amino acids show a 1:1 ratio, but the bones were dominated by left-handed molecules, showing recent biological activity. 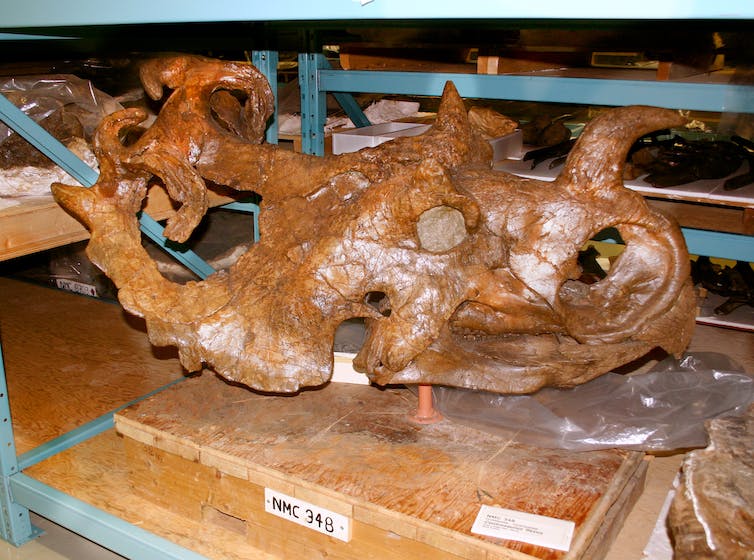 We also studied the carbon in the bones. Living things take carbon from atmospheric CO₂, which contains radioactive carbon-14. Carbon-14 undergoes radioactive decay, with half its atoms disappearing roughly every 6,000 years. No detectable carbon-14 should survive from 76m years ago, but the bones were full of it. Either these dinosaurs died a few thousand years ago, or they were contaminated by living things.

To find out what lived in the bones, we extracted DNA and the related molecule RNA from the fossil. What we found was astonishing: a thriving community of bacteria. The bones had 50 times the bacterial DNA as the surrounding mudstones. They weren’t empty tombs, but teeming with a unique microbial community, a microbiome.

Bones, unlike rock, have open spaces for marrow, blood vessels and cells, which now create space for microbes, and carry water and nutrients. Bone also contains phosphorus needed to make DNA and cell membranes. Moreover, organic tissues and vessel-like structures extracted from the bones – similar to those identified elsewhere as dinosaur tissues – glow like a Christmas tree when stained with a flourescent dye that binds to DNA. The abundant DNA suggests these organics are made by bacteria, not dinosaurs.

Needle in a haystack

Looking for fossil organics is a bit like looking for a needle in a haystack. We haven’t argued that needles don’t exist, but we’ve provided a better idea of how to tell needles from the straw. And although we didn’t find dinosaur proteins, we found something equally remarkable, life inside that dinosaur.

When our Centrosaurus died, its body fed other living things – tyrannosaurs, flies, beetles, then bacteria and fungi. But the process continued long after death. Microbes would have lived in its bones after they were buried under a Cretaceous floodplain, then when the sea rolled in and the dinosaur lay a hundred meters beneath the ocean floor, still later beneath an ice age glacier, and finally, just beneath today’s badlands.

It’s extraordinary to think, but inside the remains of a great dinosaur, tiny microbial worlds appeared, evolved and disappeared over millions of years, in a complex interplay between the living and the long-dead.

Tags
dinosaursdnageologyhistorypaleontology
In this article
dinosaursdnageologyhistorypaleontology
Related
The Past
The hobbies of 5 great geniuses
Albert Einstein played a mean violin.
The Future
A zoologist explains why the project to resurrect the wooly mammoth should go extinct
De-extinction, if it is ever possible, will not be simple.
Strange Maps
The world map of the future might be vertical
A vertical map might better represent a world dominated by China and determined by shipping routes across the iceless Arctic.
High Culture
Attacking a priceless work of art doesn’t make you an iconoclast
Climate activists’ brand of iconoclasm is far removed from the Beeldenstorm that swept medieval Europe.
The Past
Giant “toothed” birds flew over Antarctica 40 million to 50 million years ago
The spikes in their mouths would have helped them catch squid or fish.
Up Next
The Present
Cheese energy could power hundreds of UK homes
Cheese is one of the latest products to be used to create biogas.