The most psychologically riveting undiscovered archaeology in the Western world remains “proof” of Jesus and his disciples. Dan Brown’s alternative religious history, “The Da Vinci Code,” was denounced by the Church (even though it was admittedly fictional). Yet his book revealed something about human psychology, with this revival of the Holy Grail legend and Mary Magdalene selling 80 million copies sold worldwide.

Speaking of Mary, that was the name of James the Less’s mother, making him the potential brother of Jesus. While he hasn’t received the same veneration as James the Great (the patron saint of Spain), James the Less (aka the Younger) earned fame as one of Jesus’s dozen disciples. His bones have been stored in Rome’s Basilica dei Santi Apostoli for over 1,500 years—well, so people thought. According to a new research article, published in the journal Heritage Science, the femur is a few centuries younger than advertised.

Researchers used a variety of dating techniques, including mass spectrometric detection, X-Ray diffraction, and inductively coupled plasma mass spectrometry to analyze bone fragments and mummy remains in the Basilica dei Santa Apostoli. Investigating the supposed remains of St James and St Philip, they discovered that James’s femoral bone dates to somewhere between 214 and 340 CE. This skeleton certainly did not walk with Jesus.

The team also discovered rapeseed oil and a ceramic shard dating to roughly the same era, give or take a century. All samples, in fact, dated to at least two centuries after the time of Christianity’s savior.

The 6th-century church dedicated to James and Philip has gone through numerous renovations, including a 16th-century facelift that shielded it from recurring floods. In 1700, the church was basically rebuilt. In the late 19th century, relics were discovered in the catacombs and shuffled around. Keeping track of so many changes on paper has proved challenging; it shouldn’t be surprising that the fragments were caught in the mix. Superstition trumps reality—but not technology. 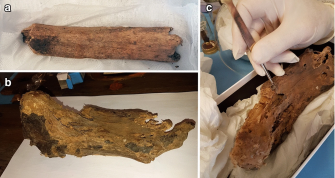 The contention that St James the Less is Jesus’s brother is also contested. As the researchers note, the Lord’s brother, Iakob, is not mentioned in any list of the 12 disciples. Pivotal to the Church of Jerusalem, with 11 mentions in the New Testament, James was part of the council that decided whether gentiles should be circumcised. His influence remains part of us—well, deciding what remains part of us.

The team notes that the potential conflation of Jesus’s brother with St James is a red flag. Calling a divine sibling “Lesser” doesn’t make sense considering his outsized influence on the Church of Jerusalem. Jesus’s brother is textually referred to as “Lord’s brother” or “the Just.” Some even consider St James the Less to be a cousin of Jesus, not a brother.

As mentioned, we love a good mystery.

Regardless, the bones in the Basilica are not of any James we know of. Lead author Kaare Lund Rasmussen, an archaeometry professor at the University of Southern Denmark, says,

“Our dates, although disproving it was St. James, fall in a dark period, between the time when the apostles died and Christianity became the dominant religion in the Roman Empire.”

In a statement released after the publication of the study, Rasmussen continues,

“We consider it very likely, that whoever moved this femur to the Santi Apostoli church, believed it belonged to St. James. They must have taken it from a Christian grave, so it belonged to one of the early Christians, apostle or not.”

The mystery continues. While we might never discover actual bones or grails, there’s always a novel waiting around for Netflix to option.

Successful forgers are remembered as great conmen, not artists. This is strange, considering their forgeries fooled even the most seasoned critics.
Up Next
13.8

One year of COVID-19: What will we learn?

Pandemics have historically given way to social revolution. What will the post-COVID revolution be?