Ornithologists already knew that acorn woodpeckers, Melanerpes formicivorus, were gonzo. They’re major hoarders of acorns, females eat each other’s eggs, and then there’s the group sex. It turns out they’re also committed, tenacious, and ferocious warriors when it comes to competition for high-quality territory. Small teams of acorn woodpeckers battle over abandoned “granaries,” tree sections with thousands of holes dug into their bark by birds — the holes are ideal for storing acorns.

First author of a new study published in the journal Current Biology, Sahas Barve of the Smithsonian National Museum of Natural History, spoke to Phys.org. He sets the scene:

“When you’re approaching a big tree with a power struggle from far away, you’ll first hear a lot of acorn woodpeckers calling very distinctly, and see birds flying around like crazy. When you get closer, you can see that there are a dozen or more coalitions of three or four birds fighting and posturing on branches. One group has to beat all the others to win a spot in the territory, which is really, really rare in animals—even in fantasy novels it usually boils down to one army against the other.”

The research also reveals that large numbers of acorn woodpeckers who are not themselves involved in the action watch the battle royal unfold as spectators. 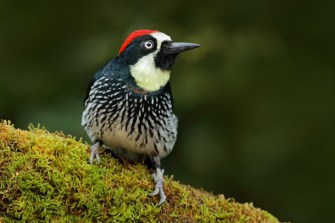 Much of what’s known about these birds, including the new research, comes from a long-running project at the Hastings Natural History Reservation in California’s Monterey Country. Acorn woodpeckers first arrived at the sanctuary in 1968 and have been under observation since 1974. The birds are common in the oak woodlands of western North America.

Acorn woodpeckers have a polygynandrous mating system, something that’s rarely seen in nature. A group will consist of as many as seven co-breeding males and four joint-nesting females. Breeding members of the group couple promiscuously within the group, and never outside it.

It’s an incestuous arrangement by human standards, with father and son competing for and breeding with the same females. And though the females use the same nests, it’s pretty competitive — one female will remove and eat another mother’s eggs to make room for her own. Over time, according to Hastings, this results in a balance in the number of chicks among the females.

In addition, an acorn woodpecker group will also include other, non-breeding community “helper” members — they’re the woodpeckers who go into battle for acorn granaries. Though the woodpeckers primarily feed on insects, acorns provide them with non-perishable nutrition for those colder months when bug meals are few and far between. 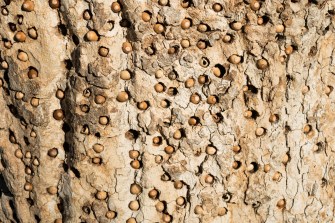 A granary for which an acorn woodpecker will fight is reminiscent of a human wine rack: An array of vertical storage compartments for their precious winter food. And they’re dead serious about acquiring this storage: “These birds often wait for years, and when there’s the right time and they have the right coalition size, they’ll go and give it their all to win a really good territory,” says Barve.

The balls-to-the-wall action of acorn woodpecker battle have made it difficult for human researchers to keep track of what’s going on, so Barve and his colleagues devised a solution: They outfitted woodpeckers with radio tags that allowed the researchers to tell when two birds were in the same location, and to track the origin of combatants, and also to make detailed observations of a melee.

While the researchers had thought that acorn woodpeckers living nearby would most fiercely make a play for a nearby granary, this turned out not to be the case. It’s not yet known what prompts one group of woodpeckers to commit to battle, though the researchers suggest that a group’s internal calculus somehow produces a decision whether to try and acquire a particular granary.

Yet commit they do. The researchers found that woodpecker teams will fight for as long as 10 hours straight, and will return day after day. This was something of a surprise to researchers, making them wonder how they even sustain themselves that long. 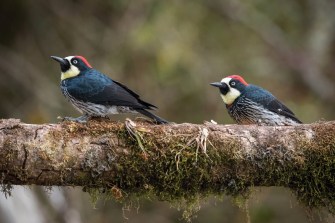 Previous research missed the spectators because the brouhaha was so overwhelming and attention-grabbing. As many as 30 woodpeckers have been observed in the peanut gallery.

The researchers have seen birds coming from as far as three kilometers (1.9 miles) away. These onlookers may spend up to an hour each day in attendance. Among the spectators are woodpeckers who already have adequate granaries of their own — whatever they get out of watching has to be worth the time spent leaving their own granaries unattended. The researchers suggest the watchers may be curious about changes a battle could make to the local status quo.

These highly social birds may also actually be rooting for one fighting group over another. “They potentially have friendships,” says Barve, “and they probably have enemies. The next step is to try and understand how their social networks are shaped, and how they vary across the year.”

In terms of sheer productivity, “-gate” has no peer. Wikipedia’s list of -gates has over 260 entries.
The Past

A 2020 study has revived a longstanding controversy over Christopher Columbus’ claims of marauding cannibals in the Caribbean.
Up Next
Thinking