On August 3, a man in El Paso, Texas, shot and killed 22 people and injured 24 others. Hours later, another man in Dayton, Ohio, shot and killed nine people, including his own sister. Even in a country left numb by countless mass shootings, the news was distressing and painful.

President Donald Trump soon addressed the nation to outline how his administration planned to tackle this uniquely American problem. Listeners hoping the tragedies might finally spur motivation for stricter gun control laws, such as universal background checks or restrictions on high-capacity magazines, were left disappointed.

Trump’s plan was a ragbag of typical Republican talking points: red flag laws, mental health concerns, and regulation on violent video games. Tucked among them was an idea straight out of a Philip K. Dick novel.

“We must recognize that the internet has provided a dangerous avenue to radicalize disturbed minds and perform demented acts,” Trump said. “First, we must do a better job of identifying and acting on early warning signs. I am directing the Department of Justice to work in partnership with local, state and federal agencies as well as well as social media companies to develop tools that can detect mass shooters before they strike.”

Depression is a silent killer. A.I. is turning up the volume.

A digitized state of mind

It’s worth noting that A.I. has made impressive strides at reading and quantifying the human mind. Social media is a vast repository of data on how people feel and think. If we can suss out the internal from the performative, we could improve mental health care in the U.S. and abroad.

For example, a study from 2017 found that A.I. could read the predictive markers for depression in Instagram photos. Researchers tasked machine learning tools with analyzing data from 166 individuals, some of whom had been previously diagnosed with depression. The algorithms looked at filter choice, facial expressions, metadata tags, etc., in more than 43,950 photos.

The results? The A.I. outperformed human practitioners at diagnosing depression. These results held even when analyzing images from before the patients’ diagnoses. (Of course, Instagram is also the social media platform most likely to make you depressed and anxious, but that’s another study.)

Talking with Big Think, Eric Topol, a professor in the Department of Molecular Medicine at Scripps, called this the ability to “digitize our state of mind.” In addition to the Instagram study, he pointed out that patients will share more with a self-chosen avatar than a human psychiatrist.

“So when you take this ability to digitize a state of mind and also have a support through an avatar, this could turn out to be a really great way to deal with the problem we have today, which is a lack of mental health professionals with a very extensive burden of depression and other mental health conditions,” Topol said.

….mentally ill or deranged people. I am the biggest Second Amendment person there is, but we all must work together for the good and safety of our Country. Common sense things can be done that are good for everyone!

However, it’s not as simple as turning the A.I. dial from “depression” to “mass shooter.” Machine learning tools have gotten excellent at analyzing images, but they lag behind the mind’s ability to read language, intonation, and social cues.

As Facebook CEO Mark Zuckerberg said: “One of the pieces of criticism we get that I think is fair is that we’re much better able to enforce our nudity policies, for example, than we are hate speech. The reason for that is it’s much easier to make an A.I. system that can detect a nipple than it is to determine what is linguistically hate speech.”

Trump should know this. During a House Homeland Security subcommittee hearing earlier this year, experts testified that A.I. was not a panacea for curing online extremism. Alex Stamos, Facebook’s former chief security officer, likened the world’s best A.I. to “a crowd of millions of preschoolers” and the task to demanding those preschoolers “get together to build the Taj Mahal.”

None of this is to say that the problem is impossible, but it’s certainly intractable.

Yes, we can create an A.I. that plays Go or analyzes stock performance better than any human. That’s because we have a lot of data on these activities and they follow predictable input-output patterns. Yet even these “simple” algorithms require some of the brightest minds to develop.

Add to this that hate, extremism, and violence don’t follow reliable input-output patterns, and you can see why experts are leery of Trump’s direction to employ A.I. in the battle against terrorism.

“As we psychological scientists have said repeatedly, the overwhelming majority of people with mental illness are not violent. And there is no single personality profile that can reliably predict who will resort to gun violence,” Arthur C. Evans, CEO of the American Psychological Association, said in a release. “Based on the research, we know only that a history of violence is the single best predictor of who will commit future violence. And access to more guns, and deadlier guns, means more lives lost.” 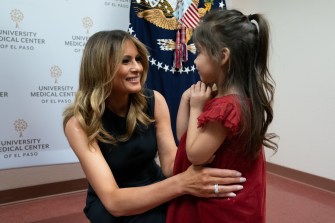 Social media can’t protect us from ourselves

One may wonder if we can utilize current capabilities more aggressively? Unfortunately, social media moderating systems are a hodgepodge, built piecemeal over the last decade. They rely on a mixture of A.I., paid moderators, and community policing. The outcome is an inconsistent system.

For example, the New York Times reported in 2017 that YouTube had removed thousands of videos using machine learning systems. The videos showed atrocities from the Syrian War, such as executions and people spouting Islamic State propaganda. The algorithm flagged and removed them as coming from extremist groups.

In truth, the videos came from humanitarian organizations to document human rights violations. The machine couldn’t tell the difference. YouTube reinstated some of the videos after users reported the issue, but mistakes at such a scale do not give one hope that today’s moderating systems could accurately identify would-be mass shooters.

That’s the conclusion reached in a report from the Partnership on A.I. (PAI). It argued there were “serious shortcomings” in using A.I. as a risk-assessment tool in U.S. criminal justice. Its writers cite three overarching concerns: accuracy and bias; questions of transparency and accountability; and issues with the interface between tools and people.

“Although the use of these tools is in part motivated by the desire to mitigate existing human fallibility in the criminal justice system, it is a serious misunderstanding to view tools as objective or neutral simply because they are based on data,” the report states. “While formulas and statistical models provide some degree of consistency and replicability, they still share or amplify many weaknesses of human decision-making.”

In addition to the above, there are practical barriers. The technical capabilities of law enforcement vary between locations. Social media platforms deal in massive amounts of traffic and data. And even when the red flags are self-evident — such as when shooters publish manifestos — they offer a narrow window in which to act. 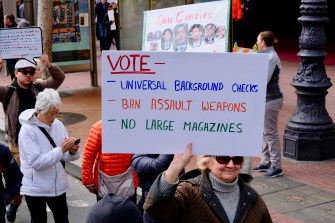 The tools to reduce mass shootings

Artificial intelligence offers many advantages today and will offer more in the future. But as an answer to extremism and mass shootings, experts agree it’s simply the wrong tool. That’s the bad news. The good news is we have the tools we need already, and they can be implemented with readily available tech.

“Based on the psychological science, we know some of the steps we need to take. We need to limit civilians’ access to assault weapons and high-capacity magazines. We need to institute universal background checks. And we should institute red flag laws that remove guns from people who are at high risk of committing violent acts,” Evans wrote.

Evans isn’t alone. Experts agree that the policies he suggests, and a few others, will reduce the likelihood of mass shootings. And six in 10 Americans already support these measures.

We don’t need advanced A.I. to figure this out. There’s only one developed country in the world where someone can legally and easily acquire an armory of guns, and it’s the only developed country that suffers mass shootings with such regularity. It’s a simple arithmetic.

The Perseid Meteor Shower Is Here, And Might Foretell Humanity’s Extinction

Doomsday prophesies have never once come to pass, but they’ve never had science on their side like this before.Every year, the Earth completes an orbital revolution around the Sun, returning to […]