Amazon employees at a fulfillment center in Shakopee, Minnesota, plan to go on strike for six hours on July 15, the first day of the company’s promotional Prime Day.

The workers — led mainly by East African Muslim immigrants — want Amazon to ease productivity quotas and convert more part-time workers into permanent employees. They hope to use the publicity of Prime Day — a two-day event during which Amazon offers deep discounts — to raise awareness about what they perceive to be unsafe and unjust working conditions.

“Amazon is going to be telling one story about itself, which is they can ship a Kindle to your house in one day, isn’t that wonderful,” William Stolz, one of the Shakopee employees organizing the strike, toldBloomberg. “We want to take the opportunity to talk about what it takes to make that work happen and put pressure on Amazon to protect us and provide safe, reliable jobs.”

It’s not the first time workers in the Twin Cities area have clashed with Amazon. In 2018, Amazon workers chanted “Yes we can” in Somali and English, demanding things like reduced workloads during Ramadan.

Amazon granted some of these wishes — by, for instance, relaxing quotas during Ramadan and converting a conference room into a prayer space — but some workers still feel the general productivity quotas make the job unsafe. In March, workers went on a three-hour strike, according to Bloomberg. A complaint against Amazon, filed with the federal government, claimed that the company retaliated against those striking workers by docking their allotted unpaid time-off hours — a move that might have violated federal law. 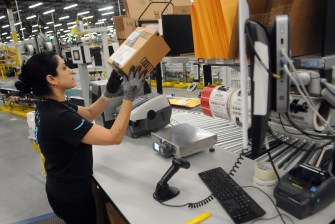 Amazon, which in 2018 raised its minimum wage for warehouse workers to $15 per hour, responded by saying it’s already met most of the Minnesota workers’ demands.

“The fact is Amazon offers already what this outside organization is asking for. We provide great employment opportunities with excellent pay – ranging from $16.25-$20.80 an hour, and comprehensive benefits including health care, up to 20 weeks parental leave, paid education, promotional opportunities, and more. We encourage anyone to compare our pay, benefits, and workplace to other retailers and major employers in the Shakopee community and across the country – and we invite anyone to see for themselves by taking a tour of the facility.”

The upcoming strike would come just months after Amazon announced one-day shipping, an offer that would likely only worsen tensions between the company and its warehouse workers.

“With two-day Prime shipping, Amazon fulfillment workers currently face speeds of 200-300 orders per hour in 12-hour shifts,” Stuart Appelbaum, president of the Retail, Wholesale and Department Store Union, wrote in a statement. “They struggle already to maintain that pace. If Amazon plans to effectively double the speed, it must also address existing workforce needs and ensure its workers are safe. Increasing fulfillment speeds means they need to hire more workers, under more sustainable speeds that don’t put worker’s lives in jeopardy.”

Walmart and Target have also begun to offer next- and same-day shipping in some form. Along with Amazon, these major retailers are locked in a battle to see which company can provide the quickest shipping, and this battle is unlikely to end anytime soon. So, as long as they continue to battle, and as long as customers continue to choose quick shipping, worker conditions at fulfillment centers are unlikely to improve much.

But then again, political pressure could do the trick. After all, Amazon’s move to raise fulfillment center workers’ minimum wage to $15 came after repeated criticism from Sen. Bernie Sanders (I-VT).

Here’s how to design a work environment that gives control to employees and stimulates open conversation.
▸
with
Todd Rose

Scientology, QAnon, and Heaven’s Gate: why do we seek healing from cults?
▸
with
Jamie Wheal
Up Next
The Present

We spoke to survivalists prepping for disaster: Here’s what we learned about the end of the world

The Doomsday clock has never been closer to midnight.