The election of Donald Trump has been a catalyst for releasing the pent-up tensions in the American society. The country is not only divided but the opposing sides are not finding much in common to talk about. While the violence has not been widespread and can be written off at this point as clashes between fringe groups, there is potential for things to boil over.

Groups united under the alt-right banner have made their presence felt at protests targeting pro-Trump speakers. But they have been increasingly confronted at these rallies by violence-minded protestors known as the “antifa” or “anti-fascists.”

The 2017 skirmishes between the alt-right and antifa included the infamous Nazi-punchwhen the white supremacist Richard Spencer was punched in the face by a masked passerby. Further confrontations happened during the protests against uber-troll Milo Yiannopoulos’s speeches in Seattle’s University of Washington, where an antifascist protester got shot, and at Berkeley University in California. The April 15th fight dubbed “The Battle of Berkeley” devolved into smashed windows and set fires, with 20 arrested and 11 injured.

There’ve been other clashes in April in Vancouver and in Portland, Oregon and a confrontation in Boston on May 13th.

So who is behind antifa?

According to The Nation,the movement has its roots in anti-fascist fighting predating World War 2. Anti-fascists organized in military brigades fought Franco in Spain in the ’30s. An infamous “Battle of Cable Street” saw thousands of fascists fighting an even larger crowd of anti-fascists on the streets of London in October 1936. The antifa movement via groups like Anti-Racist Action (ARA) has been clashing with neo-Nazis in America since the 80s. 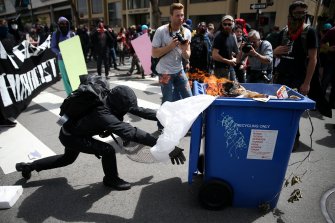 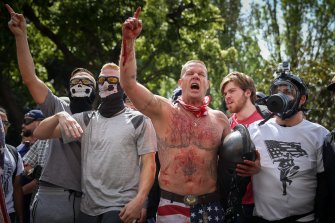 Trump supporters face off with protesters at a ‘Patriots Day’ free speech rally on April 15, 2017 in Berkeley, California. (Photo by Elijah Nouvelage/Getty Images)

The modern antifa sees neo-fascists as actively trying to change the world and people’s minds with their ideas and do not want to wait in the wings until things get worse. And they believe that theTrump movement has incorporated into itself radical far-right voices that now feel empowered to make themselves heard.

“For too long have our elected officials and our media placated these violent, toxic people. For too long have the enemies of democracy and rational, informed discourse been granted platforms to spew their rhetoric and earn notoriety for their movement. A warning to those who wish to destroy what we hold dear; We will resist you in the streets, in the poll booths and in the townhouses… We will not allow history to repeat itself. We will shut you down everywhere you go. We will block your marches. We will interrupt your speeches. We will protest your legislation. We will be the thorn in your side. The glass in your bread. The pain in your ass. We are ARA. We are watching.” – wrote a Louisville, Kentucky ARA branch on its site.

This kind of tough talk has translated into genuine mini-riots when the opposing sides get together.

Here’s how it looked in Portland [WARNING: STRONG LANGUAGE, VIOLENCE]:

Another confrontation in May in Portland also got out of hand [WARNING: STRONG LANGUAGE, VIOLENCE]:

As far as the violence, it is not the only way in which antifa groups counteract their opponents, engaging in tactics like exposing the true identities of fascists and internet trolls, helping people join unions, advocating for issues like the environment. But some do see violence as intrinsic to fascism and as such regard resorting to violence as a necessary counterforce measure.

A representative for the Antifa NYC news site explained their mission more broadly to The Nation: “Antifa combines radical left-wing and anarchist politics, revulsion at racists, sexists, homophobes, anti-Semites, and Islamophobes, with the international anti-fascist culture of taking the streets and physically confronting the brownshirts of white supremacy, whoever they may be.”

Antifa protesters often wear black masks and black clothing – a “black bloc” force. Newsweek describes this as a tactic for anarchist protest which doesn’t necessarily represent one group. It should be noted that antifa is far from just one organization and is a rather decentralized force (much like its alt-right counterpart). Antifa also includes militant groups outside of ARA. There’s the Hoosier Anti-Racist Movement (HARM) in Indiana and Redneck Revolt and others.

Conservative commentators see antifa as agitators and anarchists. Kevin D. Williamson at National Review has dismissed antifa as an invented “gang” and “children” while at the same time painting the white nationalists and antifa as “two sides of the same very sad little coin.” Williamson also doesn’t see America as having a “budding fascist movement”, which would of course make the existence of antifa unnecessary and nonsensical if you believe that.

From President Trump’s standpoint antifa are troublemakers, with some of them being paid (probably by George Soros, the right-wing’s favorite boogeyman). He tweeted a threat that federal funding could be pulled from Berkeley over the violence and suppression of free speech. There are petitions out from the right to designate “antifa” as a domestic terrorist organization. Liberal detractors, in their turn, are also paranoid that a small group of antifa agitators could start a chain of events whereby some sort of martial law would be instituted by the incensed Trump.

Could the fighting between the fringe groups get worse and go beyond the radical elements on both sides? If the rhetoric in the country doesn’t improve and a wedge will continue to be driven between the two sides, who both listen exclusively to their own media outlets, nothing rosy is to be expected. Add to this the possibility that as the various investigations around Trump close in, knowing his penchant for doubling down on his positions and riling up his base, it’s not inconceivable to imagine an America exploding in much stronger violence down the line.

Some of these trends may be due, in part, to the lockdown.
Up Next
Surprising Science

What Is Ativan? The Pill That May Have Killed Chris Cornell

A commonly prescribed anti-anxiety medication may have killed the Soundgarden frontman Chris Cornell.