Barack Obama loved one of Martin Luther King, Jr.’s quotes so much he had it woven into an Oval Office rug. You’ve likely heard it: “The arc of the moral universe is long, but it bends toward justice.” The idea itself was borrowed from an 1853 sermon by abolitionist minister Theodore Parker. King’s truncation of Parker’s sentiment is worth noting, as the sentence was part of a longer text in which the nineteenth century minister expressed doubt in understanding what the moral universe even is. His sentiment was more inquisitive than declarative.

Hoping for justice is part of our biological design, a function more of prayer than certainty. Applying it to reality runs you into problems. For example, what moral lesson can we pull from humans playing a part in causing the devastating brush fires in Australia, which thus far have killed an estimated 500 million animals? How does one even begin to make the case for justice? This question isn’t limited to one continent. Not a week passes that doesn’t include dozens if not hundreds of cases that will never resolve in a manner bending toward justice.

Andrew Marantz, a New Yorker staff writer and author of the new book, Antisocial: Online Extremists, Techno-Utopians, and the Hijacking of the American Conversation, asked his own questions about justice in relationship to the growing influence of technology on American political and social discourse. Embedding himself with leading figures in the alt-right over the course of three years, he writes that if King thought justice was a metaphysical construct, the Civil Rights leader would never would have marched across bridges. As Marantz puts it, “The arc of history bends the way people bend it.”

Justice isn’t objective. It is determined by social mores and national laws. What one finds abhorrent another believes morally justified. Marantz takes a step back: the loose-knit online contingent of folks that comprise the alt-right felt castrated by multiculturalism, betrayed by the notion of a white America. (Their memories are short, as they conveniently overlook how the whites populated this land.)

Upon being handed powerful tools to broadcast their voice, they never stopped to question if it was a good idea. They just hit “post.” As Marantz notes in his TED Talk below, one leading figure has nothing more than a phone, a laptop, an iPad, and a belligerent, racist attitude. From those pieces he constructs a six-figure “career” from his living room.

Inside the bizarre world of internet trolls and propagandists | Andrew Marantz

Inside the bizarre world of internet trolls and propagandists | Andrew Marantz

If you think there’s a coherent plan behind this overrepresented minority broadcasting on Twitter, Facebook, Periscope, and YouTube, rethink that assumption. Marantz begins his book at the DeploraBall, an unofficial inaugural celebration organized by alt-right conspiracy theorists and internet trolls in 2017. Commenting on the movement from the bird’s-eye view, Marantz sums up the motivation behind the political momentum that placed Donald Trump into office.

“They took for granted that the old institutions ought to be burned to the ground, and they used the tools at their disposal—new media, especially social media—to light as many matches as possible. As for what kind of society might emerge from the ashes, they had no coherent vision and showed little interest in developing one. They were not, like William Buckley, standing athwart history, yelling ‘Stop’; they were holding liberal democracy in a headlock, yelling ‘Stop or I’ll shoot!'”

Marantz does his best to sympathize with the characters he writes about, a commendable feat in itself. He approaches reporting in what is now considered an old school style: credibility. He didn’t accept gifts (including Uber rides or coffee), allowed his subjects to speak their voices, and asked pointed questions while letting them speak their grievances. Indeed, the strongest parts of the book, and ironically the most frustrating, occur when you’re in the living room of one of these aspirational provocateurs as they play with their children.

Frustrating because, as with Twitter fights and trolling in general, you’re reminded that all of us share one nation. We have the capability to be so much better than this. Yet debatable policy disagreements are regularly broadcast as existential threats for clickbait to drive ad revenue. The real focus of our collective anger, corporate leaders and the politicians they purchase, own much of the blame for this polarization. It just seems impossible to remember that fact while scrolling on a six-inch screen.

That said, Marantz does not give a free pass to the white nationalist movement. Being Jewish, he recognized the personal danger he placed himself in. Marantz also considers the role of the modern journalist. He might pay for breakfast to avoid conflicts of interest, but that doesn’t make supporting leaders of this movement easy. Some ideologies simply do not bend toward justice.

“To treat these as legitimate topics of debate is to be not neutral but complicit. Sometimes, even for a journalist, there is no such thing as not picking a side.” 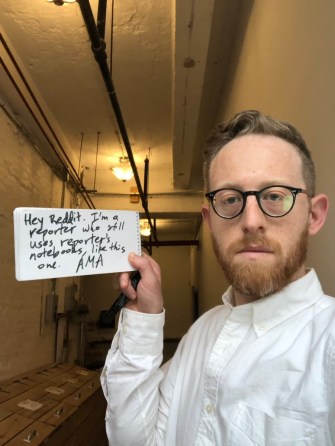 King’s quote is a recurring theme throughout the book; so is the Overton window. Named after Joseph P. Overton, a former senior VP of the Mackinac Center for Public Policy, this window is the range of policies a politician can discuss without appearing too extreme or biased. The window shifts as we become inoculated to more extreme ideas. What seemed impossible a decade ago becomes common. You get an open discussion of racist and xenophobic policies that would have once seemed unthinkable.

Don’t mistake this window for critical thinking. If, at times, it feels like social media is ruled by emotionally incompetent and intellectually stymied adults who never took the opportunity to mature from grade school, you’re not far off. Sometimes all Marantz has to do is stick a microphone in front of their mouths and let them speak. It’s maddening, listening to them shrug off thoughtfulness and honest debate. Defaulting to “free speech,” which they all do, is to forget (or be ignorant of) the fact that with free speech comes responsibility.

We cannot troll our way out of this mess. As Marantz concludes, we need a “new moral vocabulary” to address the scourge of anti-Semitic, racist, and xenophobic garbage being lightly disguised (or not at all) in our national discourse. I purposely avoided naming the figures in his book because they already receive too much oxygen. One high point is that many have been de-platformed in recent years, cutting off their precious revenue streams.

No book has captured the alt-right as powerfully and honestly as Antisocial. It is a reminder of how badly we need to redefine the Overton window with a new vocabulary. Teaching everyone this language will be one of our greatest challenges in this new decade.

If you want to escape the negativity, head to Kazakhstan.
Up Next
The Present

North Atlantic Current could stop within the next century

New research suggests the ocean current that delivers warm water to Europe has a one-in-six chance of halting temporarily over the next hundred years, potentially resulting in freezing temperatures.