Like many once affordable cities, the Berlin rental market is facing a gentrification crisis. At one point, artists, musicians, and writers fleeing New York’s sky-high prices traveled to Berlin, attracted by the cheap rent, cultural connections, and the distance from traditional professional culture. But Berlin’s status as a cultural mecca may be at risk: In the last decade, rental prices skyrocketed in Berlin by 129 percent. Considering that 85 percent of Berliners rent their homes, this has had a serious impact.

In a bid to halt this runaway gentrification, Berlin’s city government has determined to freeze rental prices for five years, starting 2020. Under the plan, 1.5 million apartments will be protected from rent increases. The plan was developed in part due to the objectively sharp rent increases, but also due to significant public backlash. Berliners have been so distressed by rent increases that activists had been collecting signatures for a referendum to force the city to seize apartments from large landlords who owned more than 3,000 buildings. 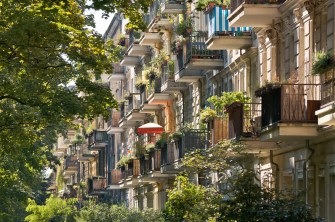 Apartments in Berlin, where rent has increased by 129 percent in the last decade.

Prior to German unification, East Berlin was economically isolated by the Berlin Wall, a legacy that enabled its later cheap housing prices and correspondingly attracted students and artists. However, attracted by the culture, opportunities for investment, and high job growth, more than 40,000 people have flocked to Berlin every year in the last decade. The addition of more than 83,000 refugees has put an additional strain on the economy.

The freeze was enacted by Berlin’s coalition government, composed of the Social Democratic Party (SDP), the Green Party, and the far-left Die Linke, with the SDP calling for similar freezes across the country. Rental prices in other German cities have been exploding as well, such as in Munich, where prices increased by 141 percent over the last decade. Thorsten Schäfer-Gümbel, an SPD leader, believes this crisis needs to be addressed. “We need a rent price cap for all of Germany,” he said. Chancellor Angela Merkel isn’t quite so enthusiastic, however, having said that “we must also provide an environment for people to want to build.”

The plan would allow small, fixed rent increases in case landlords decide to renovate their apartments, but large improvements would require city approval first. If landlords ignore this rule, they could face fines up to €500,000, or $569,000. Although the plan would go into effect on 2020, it would apply retroactively to June 18th, which would prevent landlords from rushing to raise prices before the freeze goes into effect.

This is exactly what Haus und Grund, a powerful German property owner’s association, attempted to do, calling on its members to raise their rent prices before the bill was publicly announced. Even though the retroactive date has passed, Haus und Grund is recommending that landlords increase their prices anyways in case the law changes between now and 2020.

While threatening to seize apartments from corporate landlords might be an unlikely proposition in the U.S., many Americans might be looking at what’s happening in Berlin with envy. Compared to many U.S. cities, such as San Francisco and New York, Berlin’s rental prices are still rock bottom. For instance, the median one-bedroom apartment in San Francisco costs a staggering $3,690 a month, while a comparable one-bedroom apartment in Berlin costs €869 a month, or about $990.

However, the majority of economists believe that rent controls don’t work and may actually hurt their intended beneficiaries. Just to name a few potential downsides, rent controls often cause landlords to sell their apartments rather than rent them, so that they can obtain the real market price of the property; they bulldoze their buildings and construct other properties that aren’t subject to rent control, ultimately reducing the city’s housing supply; and they might not invest in maintenance of their properties if they don’t believe they can recoup the losses through rent.

Overall, rent controls seem to work well in the short-run, but in the long-run, they can actually increase gentrification. The majority of rent control research has been conducted in the U.S., however, so there may be different conditions in Germany. Only time will tell how well the freeze works in Berlin. If it fares for the better on behalf of residents, then the move could serve as a model for other European cities.

A robotic teddy bear could improve physical and emotional outcomes in pediatric patients.