Here’s a fun exercise: try to list all of the Democratic candidates for the 2020 presidential election in your head. I’m sure you managed to name Joe Biden and Bernie Sanders, and maybe Elizabeth Warren, Beto O’Rourke, Peter Buttigieg, and Kamala Harris, too. But you probably couldn’t come up with John Hickenlooper, Julian Castro, or the other members of the field. As of this writing, 24 different people are competing for the Democratic ticket to run for president. Do we really need all of these options? Compared to previous years, perhaps more choices will be a good thing, but will having smorgasbord of political candidates hamper our ability to pick the right candidate?

The pitfall of choice overload

In one sense, we should be thankful that we have the opportunity to choose at all, that the U.S. doesn’t have a one-party system with just one candidate to vote for. But it is possible to have too much of a good thing. Psychological research has shown that human beings perform poorly when choosing between more options rather than fewer: they call this choice overload.

In an interview with Big Think, Columbia University professor Sheena Iyengar described how people tend to choose options that wind up being worse for them when there are more choices rather than fewer. For example, “people are less likely to invest in their retirement when they have more options in their 401K plans than when they have fewer,” said Iyengar. “Even when they do make a choice, they’re more likely to choose things that are not as good for them. They’ll make worse financial decisions for [themselves] if they’re choosing from a lot of options than if they’re choosing from a few options. If they have more options, they’re more likely to avoid stocks and put all their money in money market accounts, which doesn’t even grow at the rate of inflation.”

What’s more, regardless of the quality of the choice we make, having to choose from a lot of options makes us regretful. When there are many options to consider, people tend to feel that they rushed their choice and didn’t fully consider the other options. As the number of options to choose increases, so too does our perceived chance of being wrong, and we become more likely to regret our choice as a result. Whoever becomes the Democratic candidate for president, will this crowded field of candidates make us regret our choice no matter what? 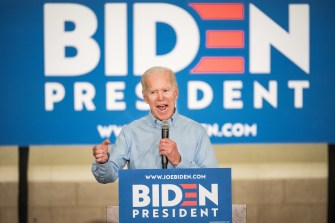 Joe Biden at a campaign event in South Carolina. As of this writing, Joe Biden leads the polls amongst the Democratic candidates. Image source: Sean Rayford / Getty Images

Are there any benefits to a larger field?

One beneficial effect that this larger field could have is in increased voter turnout. Iyengar once ran an experiment focusing on the effect of having more available choices by offering free jam samples in a grocery store. When there were only 6 different kinds of jam, fewer people stopped at the display, but they were more likely to buy the jam. When there were 24 different kinds of jam, more people stopped by the display, but fewer purchased any product. Having a wider field of Democratic candidates may make people more likely to pay attention to the election and, consequently, show up to vote.

That being said, jam and political candidates are about as different as you can imagine (although, some would argue, equally slimy). Other researchers claim that the large field will have the opposite effect, producing lower turnout. The recent Chicago mayoral election, for example, had a very large field of candidates, but also had the lowest voter turnout in the city’s history.

While selecting a candidate from this large field may have a psychological impact on voters, it may also have an impact on the primary debates themselves. For one, this is already the most diverse primary field in history, with six women, a gay candidate, and plenty of candidates from a variety of ethnic and cultural backgrounds. Prior research has shown that increased diversity in venture capital firms makes them generate more value due to their improved ability to escape the trap of “group think.” It may be that increased diversity in the primary will generate more valuable debates for much the same reason; different kinds of people come from different backgrounds and have different ways of looking at the world. It could be that we’ll hear more thoughtful discussions than we would if the Coca-Cola candidate only had to debate the Pepsi candidate.

On the other hand, Republicans are overjoyed at the growing Democratic candidate field. As more players enter the arena, the chance that some of them engage in bad-faith politics with one another increases. “It gives us the opportunity to create chaos,” said Sarah Dolan, the director of an opposition research organization, in an interview with NBC News. “They’re making our jobs easy.”

Soviet researchers studied crime through a Marxist-Leninist lens. Under Lenin, a humanitarian approach to criminality briefly emerged, but dissipated when Stalin rose to power.
Up Next
The Future

The “green” proposal would bring a 21st-century update to the 850-year-old cathedral.