You may have heard the news that the richest 22 men in the world have more combined wealth than all 325 million women in Africa. This is according to a widely reported recent Oxfam study that highlighted how global economic inequality is intimately tied to gender and race. 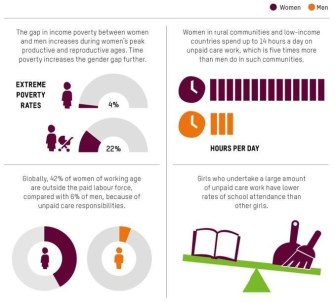 Gender, division of labor, and pay

Women and girls worldwide contribute an estimated $10.8 trillion to the global economy that they are not paid for. They collectively spend 12.5 billion hours per day on unpaid care work. Care work includes occupations like child care, healthcare work, teaching, and domestic labor. Though this kind of work is often left out of national economic equations, the monetary value of it is triple the worth of the global tech industry, according to an Oxfam report. Women around the globe, particularly those who live in poverty, do more than 75% of all unpaid care work. Despite its social importance and economic value, this labor is persistently undervalued and taken for granted by governments and companies around the world.

It manifests in different ways. In the United States, teachers, nurses, child social workers, day care workers, and other “care” jobs, which have been historically dominated by women, are underpaid. Furthermore, on an average day, women in the U.S. spend nearly 40 percent more time on unpaid care, like household duties, than men. Zoom out to a global scale and these issues are magnified in less wealthy nations like Africa where women aren’t paid at all for this work. They end up trapped in poverty, unable to get an education and achieve financial security. They are also barred from government positions in which they can influence social and economic policy.

Though men around the world are certainly suffering under the widening income gap and facing poverty, there is clearly a systemic gender disparity when most billionaires are men and most of the people occupying the lowest paid or unpaid jobs are women. Globally, men own more than 50% more wealth than women, and they also control government and economic decisions that could fix this system. Women make up only 18% of cabinet ministers around the world and 24% of parliamentarians.

The result has been a global economy designed by men, for men, that undervalues work done primarily by women, and especially marginalized women in already economically disadvantaged nations.

“When 22 men have more wealth than all the women in Africa combined, it’s clear that our economy is just plain sexist,” Oxfam GB’s chief executive Danny Sriskandarajah said.

He noted that if world leaders care about reducing poverty and inequality, they need to invest in public services like care that make life less grueling for people with care responsibilities and hold back women and girls. Yet, closing the growing wealth gap is not on the top of the agenda of most world leaders. In fact, many of them continue to facilitate policies that widen it, such as tax cuts for billionaires, cuts in public spending, and privatization.

What it boils down to is a gendered discrimination of values in which neoliberal economic values are prioritized above social values like education and healthcare. The Oxfam report warns that aging populations, cuts in public spending, and the climate crisis will exacerbate gender-based economic inequality. Part of the solution is taxing the wealthy and learning to value care.

“Getting the richest 1% to pay just 0.5% tax on their wealth – just on their wealth, not their income – would create enough money over the next 10 years to pay for 117m jobs, in education, health and elderly care,” said Katy Chakrabortty from Oxfam GB.

When we invest in social values, women are helped economically, but everyone reaps the benefits. Caregiving is going to be more valuable than ever in the next ten years. It’s estimated that by 2030, 2.3 billion people will be in need of care. That’s 200 million up from 2015 according to the Oxfam report. Part of this has to do with the climate crisis, which is deeply entangled with issues of human care. Over the next five years, it’s estimated that 2.4 billion people will be living with water shortages. Already, women and girls are disproportionately affected by this because they need to walk further to find water to nourish their communities, adding to their unpaid workload.

By thinking beyond profit and choosing to invest in water, infrastructure, and child and health care, governments can improve quality of life and liberate laborers from hours of work per day. As of now, many of them are only bolstering a system under which billions of people, disproportionately women, are suffocating under the mass of concentrated wealth held by a small group of men who grow richer and richer.

Here’s how to design a work environment that gives control to employees and stimulates open conversation.
▸
with
Todd Rose
The Past

Soviet researchers studied crime through a Marxist-Leninist lens. Under Lenin, a humanitarian approach to criminality briefly emerged, but dissipated when Stalin rose to power.
The Big Think Interview

Experts say we should only be working 15 hours per week, so why are some working 80?
▸
6 min
—
with
James Suzman
Up Next
Starts With A Bang

The problem is going to get a lot worse before it gets better, and the decision is all up to SpaceX whether they’ll fix it.On Wednesday morning, January 29, 2020, SpaceX […]