In the Beed district of the Indian state of Maharashtra, women are undergoing an extreme procedure in the name of boosting their productivity. In order to ensure that they don’t miss any days at work, many women are paying doctors to remove their wombs.

Achyut Borgaonkar, an organization that’s been investigating this issue, told The Hindu Business Line that “In the cane cutter community, menstrual periods are considered a problem and they think surgery is the only option to get rid of it. But this has a serious impact on the health of the women as they develop a hormonal imbalance, mental health issues, gain weight, etc. We observed that even young girls at the age of 25 have undergone this surgery.” 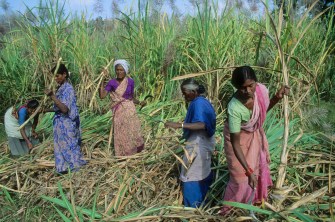 A large reason for this trend is because of the nature of farm work in Beed. It is a drought-prone district whose primary industry product is sugar cane. Laborers only have a short window during cane-cutting season (October to March) to gather sugar cane and earn what may be their only income for the year.

Contractors hire couples as one unit, paying them an advance of around 1,500,000 rupees — about $2,175. The workers pay this advance back, and female workers earn about 202 rupees per day, or $2.93. If a day of work is missed, the contractors levies a 500-rupee fine ($7.26). Rather than miss a day of work due to their periods, many women simply opt to pay for an expensive, one-time surgery to remove their wombs. This can cost 35,000 rupees ($508), or more — many woman take out additional loans to cover the cost.

One female worker told Al Jazeera that, “It was better to invest in operation at once than keep spending over medicines.” The additional costs of regularly purchasing sanitary pads, too, can make the operation appear attractive, and non-profits that offer free sanitary pads are often understocked.

In addition to these costs, many contractors reportedly see women who still have their womb as less employable. Some even offer advances to women who intend to get the surgery.

This development has been good for private doctors, some of whom have begun to advise women to get the surgery, even if its unnecessary. Subha Sri, who heads a coalition of health charities, investigated private doctors who were arbitrarily performing hysterectomies. “Doctors link all of it — their pelvic pain or lower back pain — to the uterus,” he told Reuters. “They are introducing health problems and often not treating women for what they had come for.”

What’s more, the surgery isn’t as effective as many believe. There are often post-surgery complications, which can lead to women going back to doctors for more treatment if they can afford it or suffering through their symptoms if they cannot. Often, this means that they cannot work — ostensibly the very reason they chose to get the surgery.

This practice preys on uneducated women, who have been found to be the main recipients of hysterectomies. Many women in Beed are taken out of school after puberty so that they can begin working. This has a two-fold effect: Not only do these women know less about their rights and about the dangers of medically-unnecessary surgery, but they also lack the skills to work in other, less-predatory fields.

The ultimate effect of this is wage slavery: These women are compelled to pay back their contractors and are coerced into removing their wombs in order to do so, which often merely reinforces the financial burden that perpetuates their exploitation.

Nikolaas Tinbergen’s concept of “supernormal stimulus” explains why humans are attracted to a heightened version of reality.

Experts say we should only be working 15 hours per week, so why are some working 80?
▸
6 min
—
with
James Suzman
Health

You don’t need to completely automate a job to fundamentally change it.
Up Next
High Culture

Being and drunkenness: How to party like an existentialist

“A serious party neglects the underlying virtues of playfulness and generosity that make a party authentic.”