Currently, life expectancy in the U.S. is about 78.5 years. However, that number is a general value, and it can shift dramatically based on variables such as sex, race, how old you are now, and even where you live. These shifts can be dramatic. There is a three decade discrepancy in life expectancy between Chicago neighborhoods.

The literature on the topic often wavers between the importance of personal actions and the benefits of a particular location. Now, a study published inAmerican Economic Review examines how the life expectancy of a typical 65-year-old changes with locale and finds that some locations are much better for growing old.

A new map of the United States 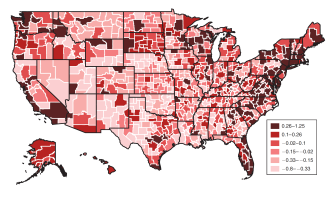 The places that are good for a person’s longevity tend to be on the coasts or in and around larger cities. As a general rule, longer life expectancy is associated with locations that have better quality and quantity of healthcare, more moderate climates, lower crime rates, less pollution, and higher socioeconomic status. Also, people who naturally have a tendency toward longer life (for example, because of genetics) can reap greater benefits by living in a healthier location.

Cheat death by moving to Seattle?

In the words of the authors, “Moving from a tenth to a ninetieth percentile location would increase life expectancy at age 65 by 1.1 years.” Given that this study found that the life expectancy for a 65-year-old in the U.S. is 83.3 years, an additional 1.1 years is a modest increase.

The study has some limitations. The effect of moving on people of different ages was not considered in this study, nor was the impact of the length of time a person stayed in a new location. The authors also note that which elements of the environment are most important in extending life expectancy are not clear.

Still, if you are looking to age gracefully, consider a move. We hear Seattle is nice.

Exercise culture is crazy. But what you need to do is exceedingly simple.
▸
with
Daniel Lieberman
Up Next
The Past

Francisco Goya: how a Spanish painter fooled kings and queens

Francisco José de Goya y Lucientes is often labeled a quintessential Spanish artist, but his allegiance may well have lied with the French Enlightenment instead.