If you turn on television news at any given moment, you’ll probably be barraged with messages of doom and gloom that assert the world’s going to hell in a handbasket. This isn’t true. In fact, many of the metrics we might use to assess whether the world is doing well or poorly lean towards the former: the number of people living in abject poverty has plummeted, literacy rates are up the world over, and violence has been decreasing steadily for centuries now.

But there is at least one way in which the world is objectively getting worse: Earth is today host to 40.3 million slaves, more than there has ever been in human history. One in 4 of these are children, and 71 percent are female. With more slaves on the planet than there are people in the country of Canada, one would think there would be more evidence of this exploitation. But recent studies are revealing that the evidence is there — it just requires a new perspective to see.

Using an eye in the sky

Slavery takes place in the background, but its fingerprints are all over the products modern society relies on. Textiles, electronics, agriculture, and even brick-making all involve slavery to one degree or another. A growing body of research is using satellite imagery to shine a light on slavery practices. In fact, an estimated one-third of all slavery can be seen from space.

While rooting out specific instances of slavery can be difficult, we can use our knowledge of which industries include slave labor and pair it with satellite imagery and artificial intelligence to track down slavers and bring them to justice.

For example, AP’s Pulitzer-winning reporting uncovered a vast slave network onboard fishing boats off the coast of Papua New Guinea. Although many of these ships were raided and hundreds of slaves were freed, other ships managed to escape. Its not too difficult to evade capture in the open ocean, but DigitalGlobe — a satellite company that provides Google Earth imagery — tracked down the rogue ships.

DigitalGlobe has also engaged in an effort to track slavery in fishing ships on Ghana’s Lake Volta. By inviting the public to pour through their satellite data, more than 80,000 ships, buildings, and fishing cages believed to be related to 35,000 enslaved children in the region have been tagged and mapped. As CEO Jeff Tarr stated, “You can’t hide from space.”

Satellite imagery has uncovered slave labor in the Sundarbans mangrove forest in Bangladesh, where children clear the mangrove forests — critical to the ecosystem in that part of the world — as part of their forced labor processing fish. Still other work is being undertaken to observe mining sites that use slave labor, as well as numerous other industries where slavery is commonplace. 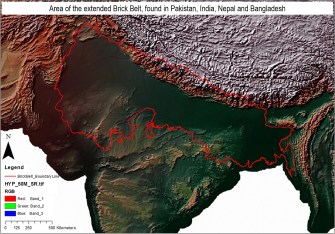 The region known as the “Brick Belt,” where slave labor is frequently used, is outlined in red.

While these attempts are all laudable, they represent just the beginning of a new satellite-based strategy to combat slavery. One of the biggest leap forward in the use of satellites to fight slavery is being undertaken by Doreen Boyd of the Rights Lab at Nottingham University. Her work focuses on the so-called “Brick Belt” that stretches crosses Pakistan, India, Nepal, and Bangladesh. This part of the world contains a large number of brick kilns. In the India region of the Brick Belt alone, an estimated 70 percent of brick kilns use slave labor.

In Boyd’s previous work, she used crowdsourcing and satellite data to gain an estimate of the number of brick kilns in the region. The number she reached was 55,387 kilns, a significant portion of which utilize slave labor, if expert estimates are to be believed. 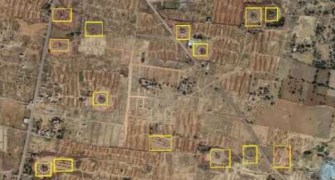 Results from an AI trained to identify brick kilns. The proposed brick kilns are surrounded by yellow boxes.

This is useful work: the problem of slavery can’t be tackled in the region without identifying their locations, and one of these kilns has already been raided, resulting the freedom of 24 slaves. But more work is needed. Her previous study didn’t identify the locations of all brick kilns, only a sample, and the region is too large to pore through manually. Crowdsourcing takes time and resources to complete and verify, and even if all brick kilns in the region were investigated, more would surely crop up in the future. Therefore, Boyd began to work on developing an A.I. that could identify brick kilns automatically from satellite data.

In the small slice of the Brick Belt that Boyd and colleagues analyzed, their machine-learning algorithm identified 95.08 percent of the brick kilns in the region. While missing any potential sites of slavery — even just 5 percent — is a serious issue, the algorithm can be tweaked to overestimate the number of brick kilns. The advantage of this approach is that, although it would select many regions that were not brick kilns, it wouldn’t miss any actual brick kilns either.

The future of the anti-slavery fight

It’s important to note that although slave labor at brick kilns represents just a small segment of the global slave trade, using an A.I.-driven approach as Boyd and colleagues did is a generalizable strategy. Slavery can appear in many forms, but it frequently leaves a physical mark upon the earth. Mining, fishing, brick-making, and other industries that commonly use slave labor can’t be easily hidden from satellites in space. Previous efforts, such as tracking fishing ships or uncovering slave labor in Bangladeshi mangroves, has relied on human volunteers who are subject to error and can only work so fast. It may very well be the case that future anti-slavery efforts will rely on A.I. to root out slavery regardless of how it manifests.

Who were the most divisive Americans?