French President Emmanuel Macron has promised that France will rebuild Notre Dame, whose roof caught fire on April 15, within five years. However, some experts say it could take longer, even decades. Either way, it’s a virtual certainty that the 850-year-old cathedral will be restored in time. The question is how, and with what materials?

Some argue the roof should be restored as closely as possible to its original state.

“We’ll use modern methods, but it should be done by the books,” Mechtild Rössler, the director of the Unesco World Heritage Center, told Business Insider.

However, one major problem is that France probably doesn’t have enough tall oak trees to restore the roof as it was. Even in the 13th century, it wasn’t exactly easy to find the 3,000 tall oak trees, some of which were up to 400 years old. French forests have only dwindled since then.

However, the insurance firm Groupama has pledged 1,300 oak trees, which are about 100 years old, from forests it owns in Normandy. No matter, though.

“The ability to find around 3,000 more big, strong trees in the next two decades is going to be tricky,” medieval historian Dr. Emily Guerry told CBS News, adding that the Baltic might have enough suitable oak trees. 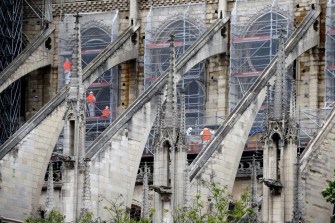 But even this might upset some of the purists who say the new roof should be made from oak from the forests of Normandy, like the original construction. To others, rebuilding the roof with another material — perhaps iron — makes more sense, consider it’d decrease the chances of the roof catching fire again in the future.

“I doubt they’ll use wood,” Carolyn Malone, a professor of art history and gothic architecture at the University of Southern California, told Business Insider.

Still another concern is restoration expertise.

“We need carpenters with the skill set to spot the right trees, treat them properly, and then erect them into this beautiful fan-like fabric,” Guerry told CBS News. “These skills aren’t really common in the modern age, but I’m sure there are really talented people out there that will be hurrying to do this job for Paris.”

At the heart of the restoration debate is a clash between the “ancients and moderns,” as art historian Dr. Jean-Michel Leniaud described to The Art Newspaper. Those in the latter camp might be more inclined to pursue a pragmatic restoration approach, in which it wouldn’t be considered a “betrayal” of French culture to rebuild the roof with a visibly modern touch.

The Ship of Theseus

The debate calls to mind the Ship of Theseus philosophical thought experiment, part of which asks:

“… suppose that the famous ship sailed by the hero Theseus in a great battle has been kept in a harbour as a museum piece. As the years go by some of the wooden parts begin to rot and are replaced by new ones. After a century or so, all of the parts have been replaced. Is the ‘restored’ ship still the same object as the original?”

If the answer is no, does that mean France should be any less concerned with rebuilding the cathedral to its exact original specifications? If the answer is no, should the lovers of Notre Dame take this tragedy as an opportunity to imbue a bit of modernity to the iconic cathedral, both in terms of materials and design?

In India, a construction boom is fueling a criminal enterprise around one of the most ubiquitous substances on Earth: sand.