When the first pieces of Malaysian Air Flight 370 finally turned up in July 2015, they were found on Réunion Island off the eastern coast of Africa in the Indian Ocean, thousands of miles from the best-guess location of where the plane went down. Experts weren’t especially surprised at the drift, given the complexities of the ocean.

Finding a missing craft or person at sea in a hurry is a nightmare for first responders, and the math involved in tracking survivors — and debris — is anything but simple, given the sea’s ever-changing mix of wind, weather, and wave conditions.

Researchers at MIT, the Swiss Federal Institute of Technology (ETH), the Woods Hole Oceanographic Institution (WHOI), and Virginia Tech recently announced the first successful trials of their new “TRAPS” system, a system they hope will provide faster, more accurate insights into the floating locations of missing objects and people by identifying the watery “traps” into which they’re likely to be attracted. The team’s TRAPS research is published in the journal Nature Communications.

According to Thomas Peacock, professor of mechanical engineering at MIT, “This new tool we’ve provided can be run on various models to see where these traps are predicted to be, and thus the most likely locations for a stranded vessel or missing person.” He adds that, “This method uses data in a way that it hasn’t been used before, so it provides first responders with a new perspective.” 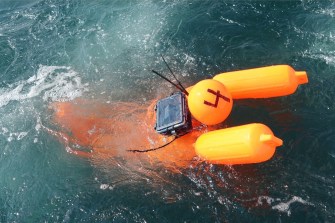 The traps the researchers seek are regions of water that temporarily converge and pull in objects or people. “The key thing is,” says Peacock, “the traps may not have any signature in the ocean current field. If you do this processing for the traps, they might pop up in very different places from where you’re seeing the ocean current projecting where you might go. So you have to do this other level of processing to pull out these structures. They’re not immediately visible.”

The new algorithm crunches through data representing the most reliable available wave-velocity snapshots at the last-known position of the missing item, and rapidly computes the location nearby traps in which a search is likely to be productive. As velocity data is continually updated, so is TRAPS.

Comparing the new Eulerian algorithm with previous Langrangrian predictive methods, Serra says, “We can think of these ‘traps’ as moving magnets, attracting a set of coins thrown on a table. The Lagrangian trajectories of coins are very uncertain, yet the strongest Eulerian magnets predict the coin positions over short times.” 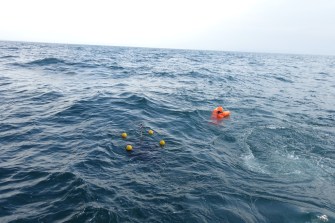 Theory is one thing, and functioning out on the real, maddeningly complex ocean is another. “As with any new theoretical technique, it is important to test how well it works in the real ocean,” says Wood Hole’s Irina Rypina.

The study authors were pleased — and surprised — at how well TRAPS worked. Haller says, “We were a bit skeptical whether a mathematical theory like this would work out on a ship, in real time. We were all pleasantly surprised to see how well it repeatedly did.”

The researchers tested TRAPS off Martha’s vineyard in the Atlantic Ocean in 2017 and 2018. WHOI sea-going experts assisted as they attempted to track the trajectories of a range of floating objects — buoys and mannequins among them — set into the water at various locations.

One challenge is that different objects may behave in their own ways in the ocean. “These objects tend to travel differently relative to the ocean because different shapes feel the wind and currents differently,” according to Peacock.

“Even so,” says Peacock, “the traps are so strongly attracting and robust to uncertainties that they should overcome these differences and pull everything onto them.”

In their experiments, the researchers tracked freely floating objects for hours via GPS as a way to verify the TRAPS system’s predictions. “With the GPS trackers, we could see where everything was going, in real-time,” says Peacock. Watching the objects move via GPS, the researchers, “saw that, in the end, they converged on these [predicted] traps.”

The researchers now have sufficient faith in TRAPS that they plan on sharing it soon with the U.S. Coast Guard. Says Peacock:

“People like Coast Guard are constantly running simulations and models of what the ocean currents are doing at any particular time and they’re updating them with the best data that inform that model. Using this method, they can have knowledge right now of where the traps currently are, with the data they have available. So if there’s an accident in the last hour, they can immediately look and see where the sea traps are. That’s important for when there’s a limited time window in which they have to respond, in hopes of a successful outcome.”

Meaningful pictures are assembled from meaningless noise.
Starts With A Bang

The biggest difference between physics and mathematics

If you can model anything in the Universe with an equation, mathematics is how you get the solution(s). Physics must go a step further.
The Future

From 260-year-old ciphers to the most recent Zodiac Killer solution, these unbreakable codes just needed time.
Starts With A Bang

To understand chaos theory, play a game of Plinko

The game of Plinko perfectly illustrates chaos theory. Even with indistinguishable initial conditions, the outcome is always uncertain.
Videos

England rolls out ‘Test and Trace’ program to combat COVID-19

The program aims to notify people after they’ve come in close contact with someone who tested positive.