“What is the reason for the Trump phenomenon, as you said in the United States? What is happening in Europe as well? The ruling elites have broken away from the people. There is also the so-called liberal idea, which has outlived its purpose. Our Western partners have admitted that some elements of the liberal idea, such as multiculturalism, are no longer tenable.”

He later doubled-down, saying that liberals “cannot simply dictate anything to anyone” and liberalism “presupposes that nothing needs to be done.”

A gander at recent headlines may suggest Putin has read liberalism’s fate correctly: white supremacists and nationalists marching in the streets; Europe’s upsurge of support for populists parties; and President Donald Trump touting military might at a Fourth of July parade that critics said reeked of rinky-dink Soviet propaganda. It can certainly seem like we are living in a strange dream.

While these recent trends are disturbing, and offer a challenge to liberal ideals, the data shows that liberalism remains alive and well in the world today. 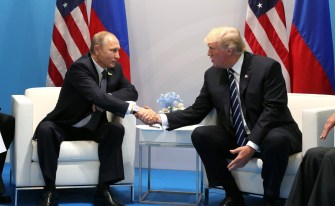 Not your American-style liberalism

First, let’s clarify what we mean by “liberalism.” For Americans, the term has drifted to become a catchall for political ideologies that lean left (and an epithet for those who lean right).

This is how President Trump understood it when asked about Putin’s comments: “I guess you look at what’s happening in Los Angeles, where it’s so sad to look, and what’s happening in San Francisco, and a couple other cities which are run by an extraordinary group of liberal people, I don’t know what they’re thinking but [Putin] does see things that are happening in the United States that would probably preclude him from saying how wonderful it is.”

To be fair to Trump, “liberalism” is a slippery term spread out across an expansive historical lineage — and that’s before we start qualifying it with prefixes (e.g., neoliberalism) and adjectives (cultural, social, classical, and muscular liberalism). But Putin meant “liberalism” in its more traditional and European sense.

For our purposes, we can hew the term to mean an ideology that puts primacy on individual rights and human agency. Under liberalism, all people should be free to pursue their dreams, be able to compete in an open market, and be allowed to decide for themselves — all offered with equal opportunity under the law and free of government coercion.

In other words, liberalism provides the foundation of modern liberal democracies that stand in opposition to Putin’s own ideology, an old Soviet-era belief in the primacy of the state and the nobility found in sacrificing individuality for its glory. (Dulce et decorum est pro Putin mori, as it were.)

As Masha Gessen, a Russian-American journalist, whose book The Future is History: How Totalitarianism Reclaimed Russia won the 2017 National Book Award, reminds us:

“Putin is a bloody dictator who jails and kills his opponents and has waged several illegal wars to the tune of hundreds of thousands of lives [and] has presided over the near complete destruction of [the Russian] public sphere.” 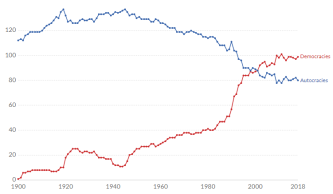 A graph showing the number of democracies and autocracies in the world over time. Image source: Our World in Data

Putin may ardently wish for liberalism’s death, but the facts of history aren’t on his side.

In an article disputing Putin, Martin Wolf, chief economics commentator for the Financial Times, combined the World Bank’s measure of “voice and accountability” in governance and the Heritage Foundation’s “index of economic freedom.” He found that liberal societies perform better economically than repressive ones. Furthermore, post-communist states that have transitioned into liberal democracy — such as Poland, Romania, and Lithuania — have all economically outpaced Putin’s Russia.

“Mr. Putin’s posturing on the world stage is a way of turning the attention of the Russian people away from his regime’s corruption and its failure to give them a better life,” Wolf writes.

It isn’t just by economic success by which we can measure liberalism’s success. We can measure the number of countries that have made the transition into liberal democracies.

Starting in the 20th century, worldwide autocracies began to dwindle in tandem with democratic growth. According to the Varieties of Democracy Project, by 2001, the world held a roughly even number of both. Ever since, democracies have outnumbered autocracies, while the latter continue to lose ground.

Of course, political anocracies don’t fall neatly in the democratic vs. autocratic binary, leading to some differentiation in absolute numbers. But the trend lines remain consistent: countries are becoming more democratic than autocratic.

Why? Because by almost any measure of human happiness, liberal democracies provide better for their citizens. They are less corrupt than other forms of governance. They score significantly higher on metrics looking at happiness, life satisfaction, human development, and protecting human rights. And though public perception in the U.S. is that violence is at an all-time high, the opposite is true. Rates of homicide in Europe are at historic lows, and the United States has seen its homicide rate fall sharply in the last quarter century.

How America could become a dictatorship in 10 years

Can liberalism meet the challenges ahead?

Putin’s claim of liberalism’s death isn’t an analysis off the world stage based on data and well-reasoned argument. It’s old-school agitprop courtesy an international troll. Liberalism is not only alive but making the lives for billions of people better the world over.

Of course, to say liberalism is alive and well is not to say that it does not face challenges. It does, and it always has.

Some originate from Putin himself. The Muller Report found the Kremlin exploited security gaps in the United States’ election security to mount an online campaign in support of populist Donald Trump. Russian agencies have used similar tactics in European campaigns, in addition to providing European populists with loans.

“The goal here is bigger than any one election,” Daniel Jones, a former FBI analyst, told the New York Times. “It is to constantly divide, increase distrust and undermine our faith in institutions and democracy itself. They’re working to destroy everything that was built post-World War II.”

But as Masha Gessen reminds us, Putin isn’t some Bond villain (though he styles himself as one). Any influence he achieved over American and European elections originated with discontent and disinformation already metastasizing within liberal countries.

“Russian attempts to sow discord — first of all, they’re predictable. Second of all, they’re ridiculous,” Gessen told TheAtlantic. “They’ve been doing pretty much the same thing for at least 50 years. American political reality has moved a lot closer to the Russian perception — what used to be a really distorted perception, it used to be a total caricature — which I think is a little disturbing.”

This discontent centers on issues as complex as immigration, economic equity, social mobility, and political polarization. In response, conservatives have sacrificed their liberal heritage in favor of strongman populists and promises of returning to a halcyon, if ill-defined, past. On the left, progressives have grown to mistrust the liberal experiment, having seen its boons disseminated unevenly or, in some cases, entirely pass over those who have been historically disenfranchised.

But as Martin Wolf reminds us, liberalism is not a “Utopian project.” It is a “work in perpetual progress” that “requires constant adaption and adjustment.” Such progress requires good data, an honest assessment of the problem, a willingness for political compromise, and an understanding that a perfect solution is the enemy of a good one.

In other words, the opinion of a wannabe-SPECTRE autocrat may not be the one we should listen to.

The Knights Templar were not only skilled fighters, but also clever bankers who played a crucial role in the development of Europe’s financial systems.

Thinking as a group and going along with the loudest voices can feel easy and even natural. But to make real positive change in our world, it’s important to hear all voices and question the perceived majority.
▸
5 min
—
with
Todd Rose
Up Next
Technology & Innovation

Recently, Tron appears to have been at the center of the latest fake news scandal to hit the crypto world. It started on July 8, after Twitter user Hayden Otto […]