Suburban affluence is the defining image of the good life under capitalism, commonly held up as a model to which all humanity should aspire.

More than half of the world’s population now lives in cities. Yet with the global economy already in gross ecological overshoot, and a world population heading for more than 11 billion, this way of living is neither fair nor sustainable.

To live within our environmental means, the richest nations will need to embrace a planned process of economic “degrowth“. This is not an unplanned recession, but a deliberate downscaling of economic activity and the closely correlated consumption of fossil energy. We don’t argue this is likely, only that it is necessary.

You might naturally assume this will involve pain and sacrifice, but we argue that a “prosperous descent” is possible. Our new book, Degrowth in the Suburbs: A Radical Urban Imaginary, envisions how this might unfold in the suburban landscapes that are currently emblematic of overconsumption.

The well-known documentary The End of Suburbia presented a coherent narrative of a post-petroleum future, but got at least one thing wrong. There is not a single end to suburbia; there are many ends of suburbia (as we know it).

Reimagining the suburbs beyond fossil fuels

Suburban catastrophists such as James Kunstler argue that fossil fuel depletion will turn our suburbs into urban wastelands. But we see the suburbs as an ideal place to begin retrofitting our cities.

This won’t involve tearing them down and starting again. Typically, Australia’s built environment is turned over at less than 5% per year. The challenge is to reinhabit, not rebuild, the suburban landscape. Here are some of the key features of this reinvigorated landscape: 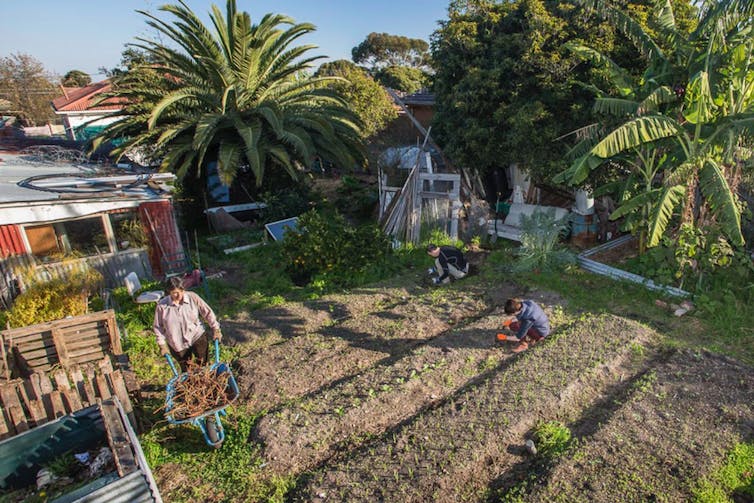 What social forces might produce this necessary but elusive urban transformation? We think it can be driven by two broad social groups: the disillusioned middle class and the exploited working class. These two groups, which already blur together along a spectrum, can potentially become a cohesive urban social movement of transformative economic and political significance.

Our first groups consists of employed professionals, bureaucrats, and tradespeople who have secure housing, earn decent wages, and can direct significant portions of their income to discretionary spending. This sector of society participates, consciously or unconsciously, in what is often called “consumer culture“.

This consumerism often fails to fulfil its promise of a rich and meaningful life. The consumer class has been sold a lie, and many affluent consumers are now developing what social scientist Ronald Inglehart calls “post-materialist” goals and values. This emerging way of life involves seeking purpose and satisfaction in life through things other than material riches, including deeper community engagement, more time to pursue private passions, or even increased political action.

This is significant, for three reasons. First, history shows that social movements tend to be sparked by dissatisfaction with the status quo – otherwise, why would people resist or seek alternatives? The deep disillusionment with materialistic lifestyles provides an incentive to explore alternative, more satisfying ways to live and self-provide.

Second, by withdrawing their spending from the market economy, this emerging social movement can undermine that economy and fast-track its transformation.

Finally, a “radical downshifting” in consumption could allow people to free up their time by working less. This will provide people with more time to participate in building new forms of economy and engaging in collective action for change. The “voluntary simplicity movement” already numbers as many as 200 million people, although its potential depends on more organised and radical expressions.

Radical downshifters will never transform the economy on their own, and this is where our second group comes in. Working-class urbanites, while also drifting into superfluous consumption, are typically characterised as individuals and households who are “battling” to make ends meet.

Again, a growing dissatisfaction with the status quo provides the incentive to seek and participate in fundamental change. We are often told that Australia’s economy has grown uninterrupted for a quarter-century, yet many people feel their personal circumstances have stagnated.

There has indeed been growth, yet almost all the benefits have been siphoned away by the wealthy. Why would the working class owe any allegiance to a system that only benefits the rich? As the battlers realise they are being oppressed and duped by an unjust system, they threaten to become a dynamite class of explosive potential.

As economic crises threaten to intensify in coming years – including the challenge of automation – we maintain that the exploited working class may be driven to explore alternative ways to self-provide. As incomes become more meagre and jobs less secure, more people will need to seek alternative ways of meeting economic needs “beyond the market”. 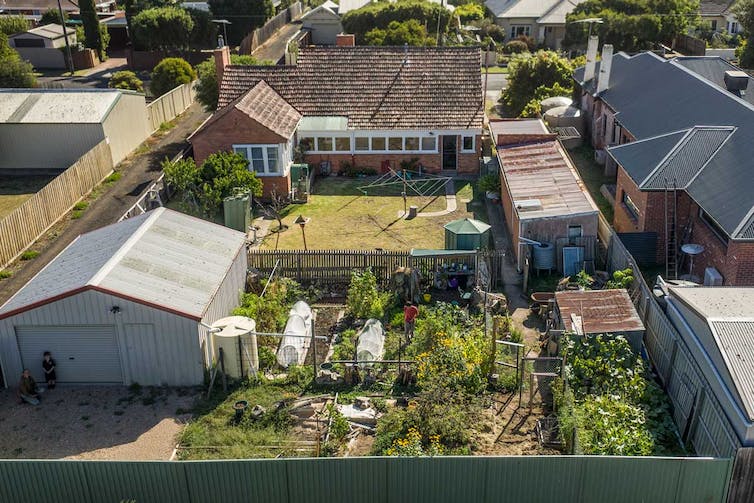 A suburban home complete with mini market garden means fewer trips to the shops (for your neighbours too). Image credit: Retrosuburbia.com (with permission)

Whether through necessity or choice, we foresee a growing number of people beginning to participate in informal, non-monetary, and local economies, including the sharing economy. Just as radical middle-class downshifters will help stifle economic growth by withdrawing their discretionary spending, those who are less affluent could begin to lay alternative economic foundations, and provide a post-capitalist social safety net.

We contend that these two social groups – the disillusioned middle class and the exploited working class – can conceivably form a cohesive movement with similar goals. The capitalist system isn’t working for many people, even those who are “winning” the rat race. Furthermore, historic growth trajectories seem to be coming to an end, due to both financial and ecological constraints.

There is the small but vocal “save our suburbs” network, in which we see the seeds of something more progressive. And it includes the energy frugal households quietly moving towards solar, batteries and increased energy self-suffiency. One by one, these households are undermining the fossil fuel industry and subtly disrupting the status quo.

As financial and ecological crises deepen in coming years, the social consciousness needed to develop new systems of production and cultures of consumption will become compelling. Together these social groups (and others not yet imagined) could form an urban social movement that withdraws support for the existing system and begins building new economies on our suburban streets.

Tags
capitalismclimate changeconsumerismeconomicsenvironmentsocietysustainability
In this article
capitalismclimate changeconsumerismeconomicsenvironmentsocietysustainability
Related
Strange Maps
In 1882, a man wrongly drew a map. His mistake saved a forest of 300-year-old trees.
A 19th-century surveying mistake kept lumberjacks away from what is now Minnesota’s largest patch of old-growth trees.
Life
Synchrony with chaos: Mathematics predicts blinking lights of a firefly swarm
A researcher explains a little-known niche within modern physics: animal collective behavior.
Hard Science
Earth can regulate its own temperature over millennia, new study finds
It’s on a 100,000-year timescale, though, so the next few centuries might not be so comfortable.
Life
Invasive plants are coming to a neighborhood near you
We want to fight invasive species. But to wage a war, you have to know who your enemy is.
The Past
How people crossed the Atlantic Ocean before commercial aviation
For centuries, the only way to travel between the Old and New World was through ships like the RMS Lusitania. Experiences varied wildly depending on your income.
Up Next
Think Again Podcasts
Joseph Goldstein – Lighten Up: mindfulness, enlightenment, and everyday life
One of the most influential Buddhist teachers and writers of the past half-century, Joseph Goldstein helped bring Vipassana (insight) practice to the West. We talk about love, pop-mindfulness, and how even a philosopher can learn to quiet the mind.